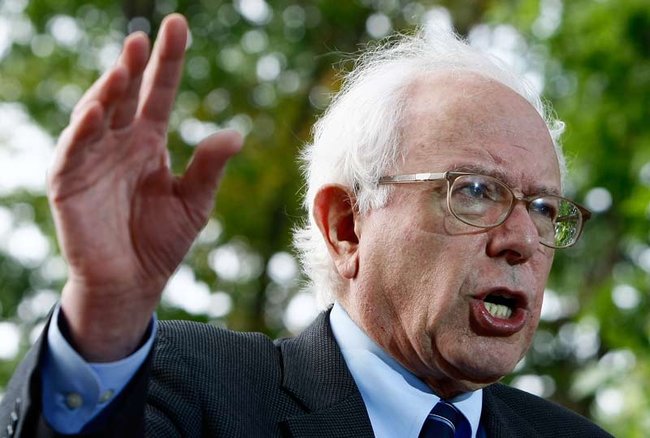 Social Democracy in the South

Bernie Sanders talks about economic justice—and the possibility of a presidential run—on a three-day road trip.

By all accounts, the audiences were friendly—progressive, multiracial, and already supportive of Sanders’ agenda.

It’s early on Friday morning and the union hall is packed with people waiting to see Bernie Sanders. Mostly gray-haired retirees fill the first few rows while unionists, college students and activists, including some veterans of the Occupy movement, are scattered toward the back of the modestly-sized room. They’re here for a town hall meeting that’s been billed “The Fight for Economic Justice.”

When the Vermont Senator arrives a bit later than advertised, the crowd at Communications Workers of America Local 3204’s headquarters in Atlanta greets the 72-year old independent with a raucous standing ovation. Sanders may be a thousand miles away from his New England constituency, but here he’s the “People’s Senator,” as a couple of folks declare during the question and answer portion of the meeting.

Columbia, S.C., Birmingham and Atlanta may seem like odd locations for a self-identified socialist senator from Vermont who speaks in a native Brooklyn accent to hold town hall meetings. But Sanders is convinced that an unapologetically social-democratic political message—grounded in calls for economic justice and a redistributive state—can resonate anywhere in the country, even in those Southern states responsible for electing many of the Tea Party representatives in Congress.

So on Thursday morning, a day after voting to raise the debt ceiling and end the government shutdown, Sanders headed down to Mississippi to kick off a Southern road trip that he’d been planning since early this summer. The Senator spoke at three town hall meetings organized by trade unions and progressive groups, with the recently formed political action committee South Forward helping publicize the events. He was also scheduled to speak at a town hall in Jackson on Wednesday night, but that evening’s crisis-averting vote in the Senate forced Sanders to stay in Washington and appear via Google Chat.

During the three-day jaunt, which also included stops at a high school, a couple of community health centers and two small fundraisers for progressive groups, Sanders covered his own expenses and didn’t raise any money for himself—rare for a sitting United States Senator hitting the road outside of his home state. Instead, the main purpose of the trip was to forge connections with audiences and like-minded political candidates in a part of the country that’s often written off by mainstream liberals.

What’s the Matter with Alabama?

“I really strongly disagree with this concept that there’s a blue state and red state America,” Sanders tells me in the parking lot outside a community health clinic in Atlanta. “I believe that in every state in the country the vast majority of the people are working people. These are people who are struggling to keep their heads above water economically, these are people who want Social Security defended, they want to raise the minimum wage, they want changes in our trade policy. And to basically concede significant parts of America, including the South, to the right-wing is to me not only stupid politics, but even worse than that—you just do not turn your backs on millions and millions of working people.”

Of course, the kind of deep progressive political reconfiguration that Sanders is talking about won’t happen overnight. Of the four states that Sanders visited, all have Republican governors and GOP majorities in both legislative chambers and none has voted for the Democratic presidential candidate since 1992. But the trip underlined the Senator’s willingness to do his small part in helping to build a progressive alternative in the South.

Sanders tells me the trip’s purpose is, in part, to identify potential candidates who could benefit from a small influx of cash next election cycle—“whether it’s independents, whether it’s third-party people or progressive Democrats…folks who have the courage to stand up to big money interests and represent working families.” The Senator’s political action committee, Progressive Voters of America, has raised about $300,000 over the last three election cycles for left-leaning Democrats in Congress. So far, the overwhelmingly majority of those candidates have been at the federal level, but Sanders is open to finding state-level candidates worthy of financial backing. After trouncing his 2012 Republican challenger 71 percent to 25 percent, it seems an opportune time for Sanders to lend his growing national clout to fellow economic populists.

By all accounts, the audiences were friendly—progressive, multiracial, and already supportive of Sanders’ agenda. They included people like Antonia Shields, president of the National Association of Letter Carriers’ Local 530 in Birmingham, who appreciate the Senator’s efforts to prevent cuts to the Postal Service. And Claire Stanton, a library assistant at the Birmingham Public Library who “tend[s] to think that a lot of the Democratic Senators are too centrist.” And Walter Simons, a part-time construction worker and artist in Birmingham who says he’s a socialist and came out because “there’s not a lot of socialists who get elected.”

But Sanders ultimately has his eyes set on winning over a decidedly less supportive sector of the population that has increasingly turned to Republicans in recent elections: the white working-class. In each of the four states that Sanders visited—Mississippi, Alabama, Georgia and South Carolina—President Obama received less than 20 percent of the white vote in 2012.

“All over this country, but maybe most noticeably right here in the South, you have white working class people voting against their own best interests,” he told the crowd at the CWA hall in Atlanta. “This country is facing some enormous problems, and we can’t address those problems for working people if the South keeps sending us members of the House and Senate who are continually voting against the interests of a vast majority of the American people.”

“What you don’t want to do, because you disagree on one issue, is to vote for somebody who’s working against you on 10 different issues,” Sanders told the crowd gathered in an auditorium at the University of Alabama at Birmingham to loud applause. “Where we have got to come together is to not allow race to divide us, not allow gender to divide us, not allow any of these other issues to divide us.”

While he reserved his harshest criticisms for Republicans, a party of “extremists,” Sanders didn’t apologize for the Democrats. In his reading, the Democrats have become more and more reliant on corporate money and correspondingly have prioritized social issues at the expense of a progressive economic agenda. It’s not that Sanders disagrees with most Democrats on social issues—he’s been pro-choice for the entirety of his more than 30-year political career and proudly points out that Vermont was the first state in the nation to allow civil unions for same-sex couples.

But he argued that the rightward drift of the party on matters of income and wealth distribution along with its declining defense of social welfare programs has left working class voters deeply disillusioned and with nowhere to go.

“By and large, it would be hard to say that most Americans believe the Democratic Party is the party of working Americans,” Sanders told the crowd in Birmingham. “Both political parties are heavily influenced by big money and I think that people are in trouble and they don’t see anybody speaking up for them and the answer is they don’t vote or they vote on some tangential issues.”

But if candidates for office can put an egalitarian economic agenda front and center, Sanders is convinced they have a future in the South. They just might also get his blessing and some financial assistance.

One couldn’t help but notice the vaguely presidential tinge of the whole affair—the wide-reaching stump speeches delivered in unfamiliar territory coupled with the fact that Sanders was greeted with a rock star reception that few other senators are capable of generating—let alone in the immediate aftermath of a government shutdown that left an already deeply unpopular Congress with its lowest approval ratings in the history of polling.

I asked the Senator if he was contemplating a presidential run in 2016. Some left-wing Democrats urged him to challenge Obama in the primary last election, and there’s once again talk of him mounting a campaign—like last time, all of it speculative. He says he doesn’t want to.

“I suppose if you’re running for president, probably going to Mississippi and Alabama is not the place most candidates would go. You go to Iowa and New Hampshire or something like that,” Sanders says with a laugh. “But what I do think is there needs to be a progressive voice in the presidential process. I hope very much there will be a voice coming up to do that.”

But when pressed to say if he’s completely decided against running, he acknowledges he hasn’t. “I haven’t ruled it out.”