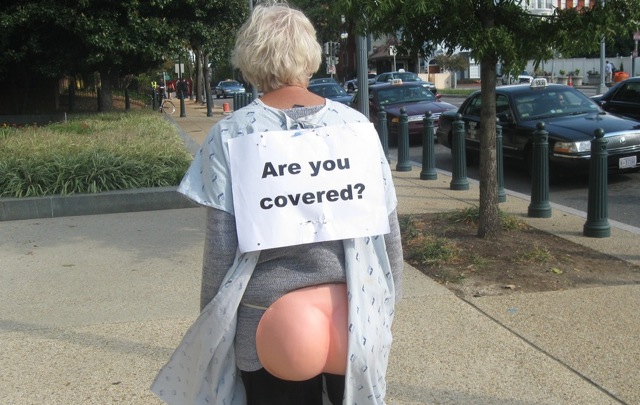 An October 31, 2009 rally outside the White House by CODEPINK in favor of single-payer healthcare. (CODEPINK: Women for Peace/Flickr/Creative Commons>

The Real Problem with Obamacare

Where the defeat of single-payer healthcare has gotten us.

Back when Obamacare was being negotiated, Congress could have circumvented the private insurance industry by simply expanding Medicare to cover everybody. Medicare isn't perfect, of course, but it remains one of the most popular institutions in America because its single-payer model guarantees access to decent, cost-effective healthcare rather than just meager health insurance.

Whenever scandal arises in Washington, D.C., the fight between the two parties typically ends up being a competition to identify a concise message in the chaos—or, as scientists might say, a signal in all the noise. This week confirms that truism, as glitches plagued the new Obamacare website and insurance companies cancelled policies for many customers on the individual market.

Amid the subsequent noise of congressional debate and cable TV outrage, Republicans argued that the signal is about government—more specifically, they claim the controversies validate their age-old assertions that government can't do anything right. Democrats countered that the signal in the noise is about universal healthcare—Obamacare is a big undertaking, they argue, and so there will be bumps in the road as the program works to provide better health services to all Americans.

This back and forth is creating an even more confusing cacophony—and further obscuring the signal that neither the two parties nor their health industry financiers want to discuss. That signal is about the need for single-payer healthcare—otherwise known as Medicare for all.

One way to detect this signal is to consider the White House guest list.

In trying to show that he was successfully managing the Obamacare roll out, the president last week staged a high-profile White House meeting with private health insurance executives—aka Obamacare's middlemen. The spectacle of a president begging these middlemen for help was a reminder that Obamacare did not limit the power of the insurance companies as a single-payer system would. The new law instead cemented the industry's profit-extracting role in the larger health system—and it still leaves millions without insurance.

The second way to see this single-payer signal is to behold the Obamacare-related congressional hearings. During the proceedings, you've been hearing a lot about the insurance enrollment website that the government is paying millions to insurer UnitedHealth Group to build. But you're not hearing much about actual healthcare. That's because the insurance industry wrote the Affordable Care Act, meaning the new statute's top priority isn't delivering health services. Obamacare is primarily about getting the insurance industry more customers and government contracts, whether or not that actually improves health services.

The third way to see this single-payer signal is to simply experience the confusion about Obamacare for yourself.

If you've managed to successfully log onto Healthcare.gov, you probably have been treated to a wave of perplexing information about different kinds of private insurance plans and premiums. In other words, you haven't seen a simple, standardized and guaranteed form of healthcare coverage like the kind provided by the single-payer government-administered Medicare system. You've likely seen the same maddeningly labyrinthine private insurance system that works to ration—and often deny—access to healthcare.

It didn't have to be this way. Back when Obamacare was being negotiated, Congress could have circumvented the private insurance industry by simply expanding Medicare to cover everybody. Medicare isn't perfect, of course, but it remains one of the most popular institutions in America because its single-payer model guarantees access to decent, cost-effective healthcare rather than just meager health insurance. It also does a good job of preventing profit-taking middlemen from getting between patients and their physicians.

Obamacare doesn't do all that. It certainly includes some important reforms, but it doesn't do what a single-payer system does—it doesn't guarantee better healthcare or a more simple health system.

Those Democrats who pretend it does are just as dishonest as the Republicans who ignore Medicare and pretend government cannot effectively manage healthcare. All of them are making noise to drown out the single-payer signal.