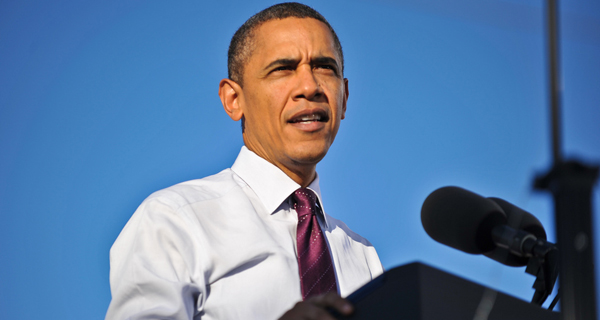 How could it possibly make national security sense that the man in the Oval Office did not have to be informed about a decision on bugging the phones of most of the free world’s leaders? (Nick Knupffer / Flickr / Creative Commons)

Without Snowden leaks, the president wouldn’t even know that the NSA spies on world leaders.

If what they are saying is true, then President Obama is either lying or his top aides did not inform him and they are not stepping forward to take responsibility.

“What did he know, and when did he know it?” A firestorm is gathering under the Obama presidency that imperils its future. First there was the fiasco over his HealthCare.gov web site—which the president was unaware of until after its launch, it has been claimed. Now the most recent case of “not in the loop-itis” is over the revelation that the National Security Agency has been spying on the telephones of German Chancellor Angela Merkel and 34 other world leaders.

This is in addition to previous leaks that the U.S. government spies on the phone logs, Internet activity and credit card transactions of virtually every U.S. citizen, of Spanish and French citizens, and that the United States has bugged European Union offices as well as the United Nations and world leaders at international conferences of the G-20.

It is a startling admission to say that President Barack Obama was in the dark on this one. If that’s true, does he realize that means that even the President of the United States needed leaks from whistleblower Edward Snowden in order to know what his own top spies are doing?

But hold on—current and former U.S. intelligence officials are saying that, in fact, top-ranked officials in the White House and State Department signed off on the surveillance of phone conversations of friendly foreign leaders. If what they are saying is true, then President Obama is either lying or his top aides did not inform him and they are not stepping forward to take responsibility. It also raises troubling questions about how honest—or informed—Obama has been in his previous defenses of the surveillance state.

So while the chief executive and the nation's top spies engage in a “he said, she said” spat over who knew what when, the rest of the nation is left puzzling over whether their president didn't know what he should have known, or is lying. No matter how one answers that question, it reflects badly on Obama. And for U.S. stature on the world’s stage.

Upping the ante, the Washington Post’s Dana Milbank has invoked that notorious echo of Watergate, “What did President Obama know, and when did he know it?” Because it's just not credible to claim, as White House officials are trying to do, that the NSA has so many eavesdropping operations under way that it wouldn’t have been practical to brief the president on all of them. How could it possibly make national security sense that the man in the Oval Office did not have to approve or at least be informed about a decision on bugging the phones of most of the free world’s leaders?

But let's keep our bafflement bipartisan, shall we? Thanks again to the whistleblower Snowden, it was reported in the German publication Der Spiegel that the monitoring of Merkel’s cell phone began back in 2002, when President George W. Bush was chief of the spies. What did he know, and when did he know it?

Congressional “Dimwit of the Season” award has to go to U.S. Senator Dianne Feinstein. As chairwoman of the Senate Intelligence Committee, which was established in 1976 as a result of the Church Committee investigation into CIA abuses to provide oversight and serve as a restraint on such espionage activities, Feinstein has been chief Democratic Party cheerleader of the national security state. She has previously insisted that the NSA is subject to stringent congressional oversight and monitoring from the executive branch.

Yet now even she’s backtracking. Recently she stated, “It is abundantly clear that a total review of all intelligence programs is necessary. … It is clear to me that certain surveillance activities have been in effect for more than a decade and that the Senate Intelligence Committee was not satisfactorily informed.”

This is the same clueless Senator from my home state of California who in June condemned Snowden as a traitor, saying, “I don’t look at this as being a whistleblower. I think it’s an act of treason. … He violated the law. It’s treason.” And yet if it wasn't for his “treasonous” acts, Chairwoman Feinstein would still be clueless.

So flip a coin: heads Obama is incompetent, tails he’s a first-rate liar. My coin flip says he’s incompetent, but he also has terrible judgment over the danger posed by his national security policies and priorities. He’s advancing the instruments of surveillance that future presidents will use. Imagine a Dick Cheney in the Oval Office, with an even more developed nest of zealous spies. The current moment has some of the same feel as the out-of-control days during the Reagan administration, when Lt. Col. Oliver North and his accomplices ran gun- and drug-running operations to support the Contras in Nicaragua, and co-authored with Attorney General Edwin Meese a plan for imposing martial law during national emergencies, called Rex 84 (Readiness Exercise 1984). It seems the off-the-shelf rogues, goons and spooks are back. Regardless of which party has the presidency, they lurk in the White House basement, making vital decisions regarding the nation’s foreign policy and remaining unaccountable to the nation’s elected leaders. The promise of Obama’s election in 2008 has been replaced by “Yes We Scan.”

If Obama truly wants to regain his footing, he must reverse not just specific policies but also his direction. He can partially redeem his tattered reputation by firing whichever of the head spooks that gave these orders. But that seems unlikely. White House spokesman Jay Carney has said that “the president has full confidence in General [Keith] Alexander and the leadership at the NSA.”

It's hard to see how Obama comes out of this without a loss of stature, both in the U.S. as well as abroad. Either the world's most powerful leader was in the dark about a matter of grave national security, or he knew about the surveillance of global leaders and, as Harry Truman once said about Richard Nixon, “He can lie out of both sides of his mouth at the same time.”

American officials have criticized rightly China’s Orwellian tactics, and urged Beijing to become, well, more like the West. But behind closed doors, the United States is becoming more like China. And the United States is fast losing all credibility to criticize China for any of its domestic and international surveillance activities.

Increasingly, the hero in all of this is looking like that “traitor,” Edward Snowden. President Obama and Sen. Feinstein, have your eyes been opened enough to allow you to pin a Presidential Medal of Freedom on Mr. Snowden’s lapel?