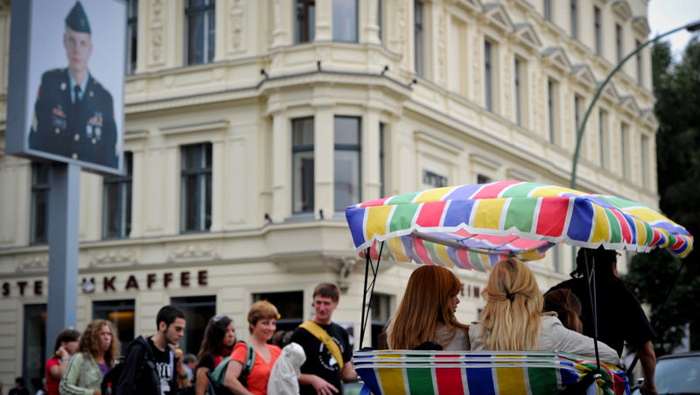 Berlin, a Favourite Once Again

In Berlin’s renewed popularity, what has been forgotten?

There are old hands who deplore this forgetting of the good things that were lost in a merger that privileged everything Western: child-care arrangements, for instance, and greater equality for women. But a new generation seems almost unaware of the old split. The Wall is gone.

“Who in all the world goes to Berlin voluntarily?” Joseph Roth, the Austrian-Jewish journalist and novelist, wrote in 1927. Roth never got over his hatred of Berlin, but then he didn’t much like Vienna or Zurich either. However, it wasn’t true then and it certainly isn’t true now that foreigners have disliked or avoided Berlin. My Jewish grandparents chose to leave their comfortable Hertfordshire home in 1902 for a longish stay in Berlin, and their first child was born there. And my father, who wasn’t Jewish, but who was a musician, spent what I’ve always imagined were the best years of his life in Berlin in the late 1920s, before he married and before I was born.

Recently, Berlin has become a favourite European city all over again. People talk enthusiastically of its calm, its wonderful museums, its cheap and delicious food, and abundant opera tickets. I’ve just paid it a lightning visit with a much-traveled son, and we were both impressed. Compared with London, there are far fewer signs of ostentatious wealth. The public transport system is superb, and you are more likely to be mown down by a man on a bicycle with a child on the seat behind him than by a 10-ton lorry or a Mercedes.

I’m told that unemployment is higher in Berlin than in other German cities—about 12 percent. The government, half of whose departments have now moved to Berlin from Bonn, is a major employer. Heavy industry couldn’t flourish in West Berlin during the blockade, and it is only now that industry is getting going again there. You get a lot of information in Berlin from everyone you meet because they all seem to know English.

Yet, between my father’s time there in the late 1920s and my visit this year, Berlin has undergone such earth-shattering traumas. I caught only a brief and horrifying glimpse of the Holocaust Memorial, a field or car park filled with concrete coffins. More moving are the small square brass plaques set into the pavement and engraved with the names of the members of Jewish families who lived in the houses above them. I was told that children study the Holocaust at least twice at school. Knowing how reluctant the authors of the National Curriculum in Britain are even to touch on this country’s crimes and follies, I wondered how on earth you would teach German children about atrocities in which their grandparents were almost certainly implicated.

I did my homework before the trip. A 1990 travel guide looked very different from a 2013 one, in which the old East/ West divisions are scarcely mentioned. There are old hands who deplore this forgetting of the good things that were lost in a merger that privileged everything Western: child-care arrangements, for instance, and greater equality for women. But a new generation seems almost unaware of the old split. The Wall is gone. Checkpoint Charlie and a few remnants are all that’s left of it, and most maps leave it out altogether. We found that we spent most time in what was once East Berlin. Many of the museums are there, and so are some of the city’s most charming as well as its ugliest areas.

I read Joseph Roth’s What I Saw: Reports from Berlin 1920-1933 before I went. The pieces are worth reading for the speed and energy they catch from Roth’s hectic life as a freelance journalist trying to make a living. They are fierce, satirical and often very funny—and the picture of Berlin as “a kind of ungovernable building site” still applies. We could see out of our window an angular white apartment block built in the last 20 years. It forms a horseshoe around a bomb site left over from the war and smothered in wildflowers.

Roth watched the buildup of Nazi power and influence. He warned of its consequences and the seeping of anti- Semitism into every aspect of Berlin life. He left Berlin forever in January 1933, on the day Hitler was appointed chancellor. Eighty years later, I wonder what he’d make of the popular Joseph- Roth-Diele, a café on Potsdamer Strasse, its shelves piled with copies of The Radetzky March and Flight Without End, its walls covered with photographs of him. The café is next door to one of his many precarious homes, from which he issued the direst warnings and was ignored.