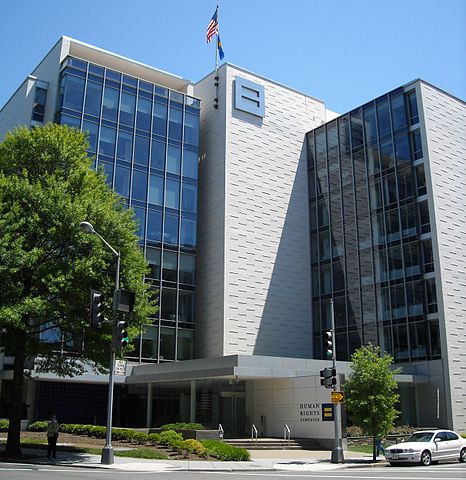 Who’s to Blame for ENDA’s Demise?

Corporate sponsors also have a basic financial incentive to oppose laws that expose themselves to large-scale suits. If the HRC, for example, were to aggressively push for ENDA, there’s the possibility that it could upset some of its existing corporate allies or inhibit future efforts to find support in the business world.

Last week, the Senate passed the Employment Non-Discrimination Act (ENDA), a bill that would prohibit workplace discrimination against LGBT people, by a 64-32 vote. However the legislation looks dead on arrival in the Republican-controlled House, which means that for at least another year, employers in 29 different states can continue to legally harass and fire workers for being gay or transgender.

And so as ENDA goes down in flames once again—and this time around, it’s a particularly weak version of the bill that exempts religious organizations—powerful gay-rights groups and their Democratic allies are predictably blaming the intransigence of House Republicans.

Harry Reid took to the Twittersphere, lambasting John Boehner for his opposition to the bill.

Even President Obama, who refuses to sign an executive order banning employment discrimination for federal contractors, joined in the discussion, writing in the Huffington Post that “one party in one house of Congress should not stand in the way of millions of Americans who want to go to work each day and simply be judged by the job they do.”

Of course, much of the rage over ENDA’s failure is rightfully targeted at the hundreds of reactionaries presently inhabiting the lower house of the 113th Congress. At this point, House Republicans are indeed the single greatest political obstacle to the bill’s passage. It’s also worth stressing that Speaker Boehner’s position—he simultaneously argues that existing workplace protections are sufficient and that ENDA will lead to spurious litigation—lacks even basic coherence.

But as groups like the HRC and their Democratic allies point fingers at the GOP, it’s important to recall that they, too, share much of the culpability for the bill’s failure. Congressional Democrats, who have little interest in championing a gay rights agenda on their own, largely respond to what the gay-rights lobby demands. And ENDA was never all that high on the lobby’s wish list—the HRC and its allies, like the National Gay and Lesbian Task Force and Lambda Legal, instead chose to prioritize marriage equality and the repeal of Don’t Ask Don’t Tell (DADT).

The inability of the HRC and its allies to secure ENDA’s passage in the relatively hospitable political climate of the 111th Congress underscores just how low of a priority the legislation ultimately was. The arrival of an apparent ally in the White House coupled with a Democratic majority in both chambers meant that the bill’s long-awaited passage finally seemed a foregone conclusion. And yet by the end of that session, itself marked by a few months during which House Democrats toiled under the pressures of an impending Tea Party takeover, DADT had been repealed, but workplace discrimination was still legal.

ENDA and the bill repealing DADT were introduced around the same time. Although both bills were supposed to pass, the gay-rights lobby and congressional Democrats focused most of the efforts on only one.

As the gay-rights lobby shifted into high gear to repeal DADT, looking to build support among the general public and Democratic members of Congress, ENDA fell by the wayside. The bill’s designated legislative champion, Barney Frank, only a couple of years removed from pushing for an ENDA that did not include protections for transgender people, was, in short, perfectly content to let the bill die as the legislative session came to a close.

“The key difference was that ENDA was held very tightly to the chest of Barney Frank,” says Heather Cronk, co-director at GetEQUAL, a LGBT advocacy group with a focus on direct action that has taken to the streets on marriage, DADT and workplace discrimination. “There was no opportunity to engage with him. There was no opportunity to talk targeting, to get a sense of what was happening inside the walls of Congress on it, there was just no communication, at least from where we were sitting about the bill. There may have been communication with HRC and more lobbying-oriented groups, but with the broader community, there just wasn’t any conversation.”

(I reached out for comment to Diego Sanchez, who was Frank’s Senior Policy Advisor at the time of ENDA’s failure in 2010 and now serves as policy director for Parents, Families, & Friends of Lesbians and Gays (PFLAG). We spoke very briefly on the phone, but he said that his organization needed to vet all press inquires before he could talk to reporters. Sanchez never got back in touch.)

Of course, if one considers the sheer numbers of people affected, the unwillingness of the HRC and its allies to aggressively push for ENDA seems nonsensical.

While arguably significant, marriage equality and the repeal of DADT are ultimately far from universal issues—not every gay person wants to serve in the military or to get married (a fact that The New York Times seems to have only recently discovered). On the other hand, the overwhelming majority of us, gay and straight, cisgender and trans, are workers. When the powerful gay lobbying groups turned their focus to marriage and the military, they made the choice to leave 76 million workers out to dry—more than half of the American workforce. Whether or not they identify as gay or transgender, these tens of millions of workers live in states where they can still be terminated or forced out of a job under the mere suspicion that they are.

Moreover, a June 2011 poll found that 73 percent of people support legislation on workplace discrimination. Support for ending DADT reached similarly high levels, 67 percent according to a Gallup poll completed shortly before Congress repealed the law. But, as of this summer, only about half of Americans favored gay marriage.

Given ENDA’s impact and popularity, why the decision to push for gay marriage and a DADT repeal at the expense of ENDA?

Cronk of GetEQUAL says the interests of funders unquestionably played a role. “It’s much easier for large groups to fundraise around marriage and military than around employment, because for most of the people who have money to give, it would never occur to them that employment discrimination is (a) a problem and (b) a problem that can very easily be solved,” says Cronk.

It’s no secret that the agenda of the HRC is largely dependent on what its donors want—and many of those donors are corporations. Building alliances with corporate America is a key part of the HRC’s strategy, as evidenced by the group’s annual corporate equality index. On its website, the HRC proudly advertises its corporate sponsors—“platinum partners” include Citi and Nationwide Insurance, and the “gold partners” comprise industry powerhouses like Bank of America, Chevron and Deloitte. Sometimes the group’s allegiances to corporate America can betray themselves in even clearer ways: HRC flirted with backing George Bush’s plan to privatize Social Security in 2004 and more recently promoted a YouTube video of Goldman Sachs CEO Lloyd Blankfein expressing his support for marriage equality.

Corporate sponsors also have a basic financial incentive to oppose laws that expose themselves to large-scale suits. If the HRC, for example, were to aggressively push for ENDA, there’s the possibility that it could upset some of its existing corporate allies or inhibit future efforts to find support in the business world.

To be sure, like other large liberal institutions, the HRC can be responsive to some outside pressure. Sherry Wolf points out that major public backlash forced the HRC to support a gender identity-inclusive ENDA after lobbying for a bill without those protections in 2007. And according to the longtime gay unionist Cleve Jones, who helped pass California’s ENDA-equivalent in the 1980s, public agitation in favor of gay marriage played a large role in forcing the HRC to throw its weight behind that issue at the time it did. However, when outside pressure and donor interests align, an issue is much more likely to jump to the top of the priority list.

Democrats and gay rights activists increasingly talk of how far the country’s attitudes have shifted when it comes to same-sex relationships. That broad transformation is indisputable, and the widespread public support for legislation to protect LGBT employees is a prime piece of evidence. But as the ENDA fiasco so painfully illustrates, the gay political establishment can be as insulated from the realities of workers as the rest of corporate America.