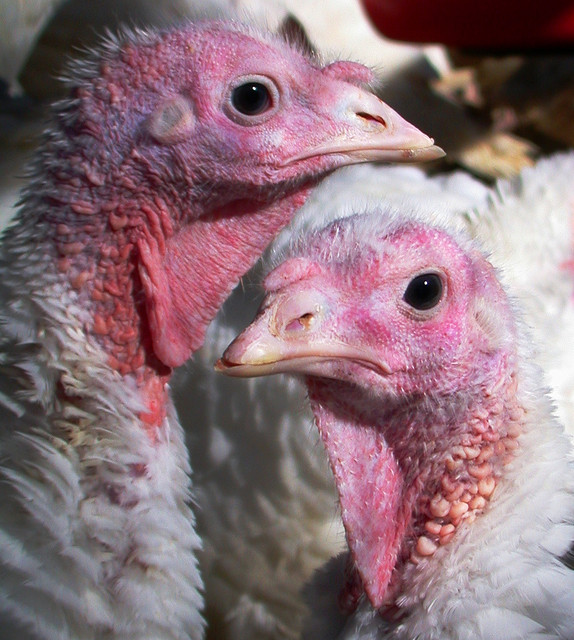 Around 46 million turkeys are eaten each year in the United States. (Cyanocorax/Flickr/Creative Commons)

Meat consumption not only affects our environment, but also our access to antibiotics.

Just in case you are comforting yourself by believing this is all just a hypothetical, note that CDC reports confirm these superbugs already afflict 2 million Americans a year and annually kill at least 23,000. The crisis, in other words, is here...

Right around now, many Americans are picking at the last few chunks of leftover turkey. This annual ritual is a reminder that stripped of its pilgrim mythology, Thanksgiving is an extended paroxysm of meat consumption. Oh, sure, we go out of our way to pretend it isn't really about that to the point where the president of the United States makes a public spectacle out of pardoning a bird. Yet, this particular holiday is our culture's grandest celebration of flesh eating–and therefore, it has become a microcosmic example of our willingness to risk self-destruction.

I can already hear your inner monologue–the one saying that such apocalyptic language is irresponsible hyperbole. But take a moment away from those leftovers to consider just two scientific realities.

The first is catastrophic climate change. According to a report last year by two former World Bank experts, more than half of all carbon emissions come from the livestock industry that supports the meat economy. Those emissions are related to everything from transportation to land use to excretion to petroleum-based fertilizers that generate animal feed. The more meat our society consumes, the more these carbon emissions continue, the more we intensify climate change, and the more we imperil human survival on the planet.

Let's say, though, that you are one of those head-in-the-sand types who insists that climate change isn't happening or isn't anything to be concerned about. This, of course, is a convenient theology that self-servingly rationalizes a narcissistic aversion to any kind of sacrifice or lifestyle change. But, for argument's sake, maybe you reject all the environmental science and you genuinely either do not believe the climate is changing or you believe that the changes are inconsequential. Even then, I'm guessing you want life-saving medicine to continue being effective, right?

If you're answer is a resounding “yes,” then you should have a problem with how much meat our society consumes. That's because Food and Drug Administration data proves that to produce enough meat to feed America's current demand, the livestock industry is now consuming a whopping four-fifths of all antibiotics used in a given year. According to the Centers for Disease Control, this overuse of antibiotics has played a huge role in creating lethal drug-resistant superbugs. That threatens to turn back the clock to the era before modern medicine.

“A post-antibiotic era means, in effect, an end to modern medicine as we know it,” says Dr. Margaret Chan, the director of the World Health Organization. “Things as common as strep throat or a child’s scratched knee could once again kill. Some sophisticated interventions, like hip replacements, organ transplants, cancer chemotherapy and care of preterm infants, would become far more difficult or even too dangerous to undertake.”

Just in case you are comforting yourself by believing this is all just a hypothetical, note that CDC reports confirm these superbugs already afflict 2 million Americans a year and annually kill at least 23,000. The crisis, in other words, is here–and is getting worse in large part because of our meat economy.

Does every steak need to be wrapped in a picture of destruction from a climate-intensified storm? Do we need labels on every turkey that show the names of the people who died from superbug infections? If not, what is it going to take to finally make long-term human survival a bigger priority than gluttonous meat consumption?