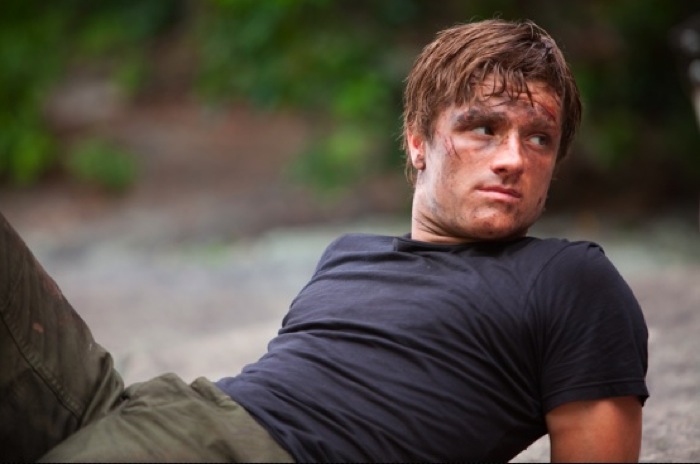 In Defense of Peeta Mellark

Heterosexual men have had the privilege of fantasizing about these sorts of self-serving, one-sided relationships forever. For every Katniss Everdeen, there’s a James Bond; for every Peeta, a forlorn elf-maiden who's willing to forsake both family and immortality just for a shot at Aragorn.

At last, the Hunger Games movie franchise is back. And even better, this time around, the movie’s actually good. The second installment, Catching Fire, is a faithful translation of Suzanne Collins’ grim satire of class struggle and celebrity culture: It’s frequently harrowing, extremely well-acted, and features some of the most realistic discussions of post-traumatic stress disorder you will ever see in a children’s movie. And yet, somehow, all anybody wants to talk about is how Peeta Mellark acts like a wuss.

It’s true that Peeta—one of heroine Katniss Everdeen’s two love interests, and the one who grabs the most screen time in Catching Fire—is not a terrifically macho guy. He’s a soft-hearted, doe-eyed baker, who is prone to explaining, while in high-pressure combat situations, how proud he is of his skills at complicated decorative icing. And, as is to be expected when you go into battle with a guy who is basically a sexy version of the Cake Boss, he tends to get injured and require rescue a lot. In his SNL hosting gig, Josh Hutcherson described his role as follows: “I play Peeta, the brave young hero who immediately gets hurt and has to be carried around for the rest of the movie.” Naturally, pop-culture blog Vulture followed up with “A Thorough List of All the Times Peeta Messes Up in Catching Fire.” And, in a great post at NPR, Linda Holmes praised the Hunger Games franchise for subverting gender roles by making Peeta a perfect “Movie Girlfriend”: “He's better than she is, but softer. … He's just as tough and as brave as he can possibly be with the skill set he has, and she's responsible for mopping up when that's not enough.”

And then there’s this highly intense comment on the Vulture piece, which, strangely enough, might also be a useful place to start when discussing Peeta:

Poop-hole-shoving mother-crappers aside, this does cut to the heart of things. The Hunger Games has been a massive success because it’s balanced its acidic political critique with a healthy dose of wish-fulfillment fantasy. And Peeta is one of the main wishes being represented. In fact, he’s not even a terribly uncommon wish: There have been multiple versions of him in teen-girl cinema for decades. The public bafflement around Peeta Mellark is just one more case of the public finding out what teen girls actually want, and how very far it strays from our received ideas about what they ought to be wanting.

Decoding wish-fulfillment fantasies aimed at girls is often more difficult than decoding those aimed at boys, because of the different rules for men and women when it comes to wanting things for themselves. The Harry Potter series, for example, although it was written by a woman, is a classic boy-power fantasy. The story begins with someone approaching Harry and simply telling him that he is the most special boy in the entire world. Following this announcement, he’s whisked off to a magical place, where he is given fabulous wealth, instant celebrity, ideal parental figures, popularity amongst his peers, and superpowers. When he finds out, only a few chapters later, that he’s also a naturally great athlete, and will therefore be given the most important position on the Quidditch team despite having no idea what Quidditch is, it’s ludicrous, but not surprising. Large portions of the first installment of the Harry Potter series are devoted to good things simply falling into the lap of one Harry Potter, because he is wonderful and special and important, and because his fictional reality is constructed to reward him for it. Being a boy, Harry never has to refuse any of this. That’s not required by the male rules. Granted, as a hero, he is required to be somewhat modest, and as he grows up, his attitude toward the rewards granted to him becomes more complicated (“celebrity,” in particular, became something he started to dislike once J.K. Rowling experienced the real-life version). But in the first installment, at least, it all just happens, and he rolls with it.

When you look to the wish-fulfillment narratives for female protagonists, however—Twilight’s Bella Swann, for example, or The Hunger Games’ Katniss—things get more complicated. These heroines are typically required to not want, or to feel unworthy of, all the fabulous rewards they’re constantly getting. Bella Swann is instantly popular at school, two incredibly gorgeous boys are in love with her, and she eventually becomes wealthy, superpowered and immortal to boot. And yet her first-person narration constantly states that she is a lowly, plain-looking klutz who just doesn’t understand why anybody loves her. In order to get all these rewards—in order to deserve them—the female wish-fulfillment figure needs to believe that she is inherently undeserving.

Similarly, every bit of wish-fulfillment Katniss Everdeen experiences is accompanied by affirmations of how little she wants it. She’s too cool to care about pretty dresses—but all of her dresses are so incredibly pretty that everyone gasps and applauds when they see her, and she continually receives compliments on how gorgeous she looks. Celebrity is stupid and corrupt—but Katniss is the biggest celebrity in Panem, so universally beloved that people start a revolution in her honor. Katniss has nothing but contempt for those snotty, wealthy Career Tributes, who kill people to gain social status—but they all die, and she therefore gains wealth and social status.

And then, there's the romantic fantasy. Katniss doesn’t care about having a boyfriend. And yet, somehow, she has two of them. Specifically, in Catching Fire, she has Peeta Mellark, a character defined by his endless, selfless, unconditional adoration of Katniss Everdeen.

Every single thing Peeta does in Catching Fire is aimed at getting people to like Katniss, at taking care of Katniss’ feelings, or at saving Katniss’ life. For her part, she continually rejects Peeta, and is openly ambivalent about their relationship; this alters his dedication not one whit. Katniss is, quite literally, Peeta’s only priority. At one point, he explains why he would like to die for her: “If you die, and I live, then I have nothing. Nobody else that I care about.”

If somebody uses that line in real life, you whip out the Mace. But, in teen-girl-wish-fulfillment terms, it’s nothing new. Look at ‘90s teen-girl-driven blockbuster Titanic. Leonardo DiCaprio spent the greater part of three hours yelling at Kate Winslet about how wonderful she was and how much she deserved from life, and then intentionally froze himself to death so that she could survive the shipwreck. Plenty has been written about the abusive overtones of the Twilight series, but both Edward and Jacob were continually affirming that they had no goals or needs other than serving Bella; Edward repeatedly told Bella that if she died, he would commit suicide. It’s supremely creepy, but again, it simply means that his life has no purpose outside of making her life better.

It’s hard for us, as a culture, to process this, precisely because it flies in the face of how we socialize girls to express desire. Wish-fulfillment fantasies are selfish: They’re about getting everything you want, because you want it. They’re about Harry Potter becoming rich and popular and famous and a star athlete and a superhero, in the space of a few months. They’re about being the girl with the most cake—and women aren’t supposed to want cake, aren’t supposed to desire anything just for themselves because it feels good, which is why the female-centric versions of these narratives always come bound up in carefully calculated avowals of self-denial and self-loathing. Underneath it, though, you can see something greedy, fierce, unconcerned with social propriety: Stories about beautiful, selfless, worshipful boys whose only desire is to fulfill female desires. Oh, and by the way: Thanks to this nifty “love triangle” device we’ve got rigged up, the girls get more than one beautiful boy apiece.

Are these fantasies unrealistic? Certainly. Are they a poor preparation for real-life relationships? Without a doubt. But heterosexual men have had the privilege of fantasizing about these sorts of self-serving, one-sided relationships forever. For every Katniss Everdeen, there’s a James Bond; for every Peeta, a forlorn elf-maiden who's willing to forsake both family and immortality just for a shot at Aragorn. We think of unruly, selfish desire as an essential component of manliness. But heterosexual teenage girls—those delicate, fragile things, with their dreamy dreams and their pink canopy beds and their unicorn journals—turn out to want the exact same thing. They want it enough to pay for it, to flock to it, to make legendary financial successes out of Titanic and Twilight and The Hunger Games. The fantasy of being adored and catered to, with no obligation to reciprocate, isn’t male or female: It’s human. Shockingly, it turns out that sex is fun, everyone wants to be loved and real relationships take work.

Eventually most people—even the people currently leaving all-caps comments about marrying fictional characters—are going to experience real relationships. And those, by their nature, are more interesting than fantasies (and get their fair share of movie treatment, too.) Everyone involved has a life, and desires, and goals; if nothing else, it makes for good conversation. But as long as the world is a hard place, and people don’t always get everything they want, there will be girls who want to slip away from reality for a few hours to see what it would be like to have their own Peeta.