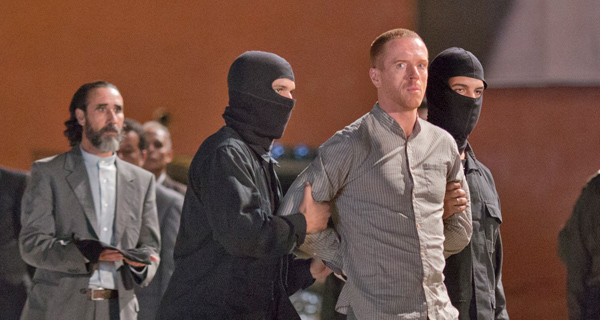 The plot may hinge on Brody’s execution, but at its heart, this episode is Carrie’s story—and that has been a long time coming.

“I was born in the desert,” Sergeant Nicholas Brody muses, halfway through the Homeland season finale. He is staring out the window of a car driven by Carrie Mathison through the Iranian desert; he has a drained, translucent, mournful look to him. Rather than launching into the appropriate PJ Harvey and/or Captain Beefheart song, though, he begins to give an expertly acted speech about his upbringing. And by God, it was touching.

“Childhood speech,” I wrote in my notes. “If I believed he’d ever die I would say they’re setting it up.”

Well, give Homeland credit: They were, in fact, setting it up. After a season of fake-outs and recycled plot lines—a season in which it seemed that former protagonist Carrie was incapable of uttering a sentence that did not contain the word “Brody” or taking an action that didn't revolve around her ridiculous and unshakable love of the guy—the writers actually took the plunge. Brody’s dead. For real.

Help keep this kind of analysis possible by making a donation today.

And as a further bonus, his death was actually quite sad. The quandary set up in the last episode—getting Brody out of the IRGC offices after his assassination of Akbari—was quickly solved thanks to Carrie, who swung by to pick him up before heading for a safe house outside of Tehran. But with the suspense-thriller elements of the plot out of the way, what’s left is a long, quiet, bleak stretch of gradually building dread.

After Carrie whisks Brody away from the IRGC offices, Javadi tells the CIA over the phone that he needs to capture and execute Brody in order to confirm his loyalty to the IRGC and get Akbari’s job. In turn, the CIA realizes that, unless Javadi gets that job, all their work at getting a plant into the IRGC will be for nothing. So they look the other way as Javadi’s forces sweep into the safe house and take Brody, leaving Carrie untouched. Carrie then spends the rest of the episode coming to terms with the fact that there’s no last-minute out, no stunning CIA bit of trickery to deploy, no way for her or anyone else to save her lover’s life. In the end, she goes alone to the site of the execution, where she’s just one of many faces in a crowd, watching Nicholas Brody as he’s hung from the neck until dead. She tries to call out to him. An armed guard knocks her down with a club. Then Brody's gone.

There are many things I like about how this played out. The most obvious thing, of course, is Brody’s death. Damian Lewis always put a tremendous amount of work into playing Brody, but the character was cancerous for the show: omnipresent, useless and debilitating to the writers’ ability to tell a fresh story or develop its other characters. In particular, it started to seem that Carrie Mathison would not be able to thrive until Nicholas Brody was taken out of the picture. As long as he was around, she was a woman defined entirely by her boyfriend, a hollow shell in which Brody Feelings and Brody Fetuses took shelter. At one point in this episode, Carrie describes her feelings for Brody by saying, “I happen to believe one of the reasons I was put on this earth was for our paths to cross.” As poetic as that is, the surprising thing about this statement is Carrie’s use of the phrase “one of,” given that Brody had increasingly become the only reason she did anything at all.

Which is the other thing about this turn of events that seems promising: In the end, the emotional weight of Brody’s death rests almost entirely on Carrie. Brody is tired of existing. At the safe house, he confesses that he sees no greater purpose in killing Akbari. He’s already wrecked his life and the lives of his family members, and one more assassination won’t change him in any way. He thinks the whole killing-people-for-your-country business is morally bankrupt, and—given that this season of Homeland has revolved entirely around the United States assassinating a foreign leader to advance its own interests—he’s not wrong. And so, when Brody is imprisoned and immediately sentenced to death, he accepts the news without protest. Carrie is the one who experiences his death as a tragedy: She’s the one who is in denial, who experiences rage, who tries to bargain, who feels the loss and eventually accepts it. The plot may hinge on Brody’s execution, but at its heart, this episode is Carrie’s story—and that has been a long time coming.

“Why would anyone do that to themselves?” the guy recently seen tearing his ex-wife’s throat out with a broken bottle muses. “Why would you? And I think I know now. It was always about him. That’s what you care about. Maybe the only thing.”

Well, duh. Thanks, Javadi, for restating what we’ve heard or witnessed at least once an episode since Brody’s return. But just imagine: This might be the last time in Homeland’s history that the plot is forced to stop moving so that someone can affirm that Nicholas Brody is “the only thing” Carrie Mathison thinks about in the course of her day. In light of this suggestion, one more run through the Carrie-loves-Brody script isn't so hard to take.

In some ways, this episode felt like a series finale. After all, the fifteen minutes  or so following Brody’s death were filled with the sort of closure that you see when a show is shutting off the lights and locking its doors for the last time. Saul, having been officially fired from the CIA despite the Javadi plan's success, is living happily with Mira in a seaside location stocked with French bread products, thereby putting a stop to the Berenson Marital Strife Cycle for the time being. Carrie will be a station chief—the youngest in the CIA’s history, Lockhart affirms—in Istanbul, from which she can run the Javadi operation. The outcome of the Javadi operation, for that matter, seems favorable so far: Iran is offering IAEA inspectors access to its nuclear sites thanks to Javadi's nudging.

The only lingering—and highly unsatisfactory—conflict is Carrie’s sudden decision, eight months into her pregnancy, that she can’t have a child, and her family offers to take it for her.  (This, for the record, doubles down on the show’s misogynist “family or career” messaging: Carrie says that she can’t keep the baby “because of her job,” then says that as a station chief, she’ll be “fearless, obsessed, ruthless … all the same reasons [she] can’t” have a kid. She also says she can’t have the child because of her bipolar disorder; in yet another example of real life screwing up Homeland’s plot lines, British social workers recently reportedly cited a similar reason for giving a woman a forced C-section and taking her child, which should give you some idea of how repugnant the show’s reasoning really is on these matters.) All in all, though, I don’t think this finale was the end of Homeland. In fact, I think it feels like the beginning of a new, better chapter.

At the start of Homeland, there was Nicholas Brody. But the show was never really about him. It was about a woman—a complicated, flawed, passionate and brilliant woman—named Carrie Mathison, and her quest to do the best work possible for the CIA while managing her personal pain and chaos. Brody wasn’t the hero; he was only the hero’s mission. When the show lost track of that fact and forced him to serve as a central character, it lost its focus. Now, finally, that mission is over—and Homeland can become a show about Carrie Mathison once again.