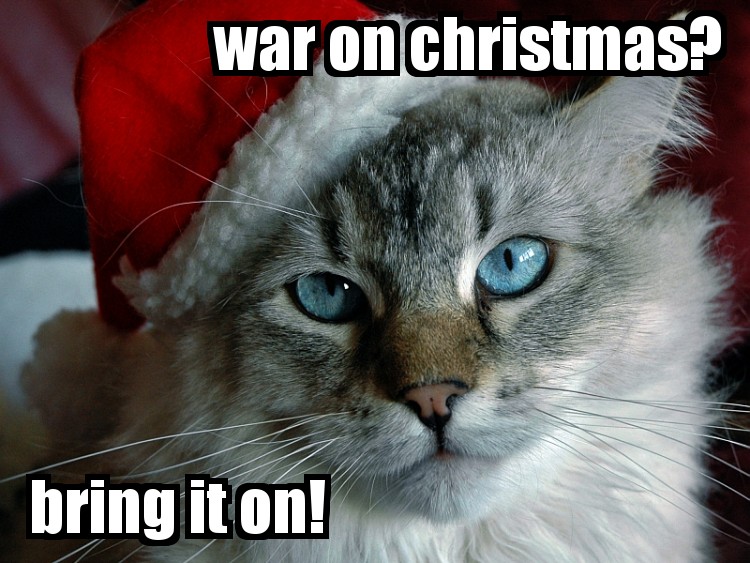 We won't miss much about the fake 'war on Christmas,' but it did make for a good cat meme. (Stephen Perez/Flickr/Creative Commons)

The End of the ‘War on Christmas’ Fearmongering

Despite the best efforts of Fox News, Americans have recognized there’s no ‘war on Christmas.

Rupert Murdoch's cable television empire is still trying to turn the holiday into another excuse to promote conflict. Thankfully, polls show that the tactic isn't working.

Another winter solstice has come and gone, and yes, the annual celebration of the birth of Jesus has once again survived the alleged “War on Christmas.” In fact, as of this year, this pretend war may finally be ending—and not because those “defending” Christmas won some big battle, but because more and more Americans are realizing there is no such war at all.

This is one of the key findings of a new poll about Christmas from Fairleigh Dickinson University. In that survey, only 28 percent of respondents said they believe liberals are waging a war on Christmas. That's a steep decline from last year, when a Public Policy Polling survey found 47 percent of Americans believing there is a war against the holiday.

All of this is good news—especially because these welcome public opinion trends are coinciding with a renewed effort by the divide-and-conquer crowd to continue manufacturing division. Indeed, as just one example, Fox News' Megyn Kelly tried to make the “War on Christmas” meme into a full-on race war by insisting that both Santa Claus and Jesus must be depicted as white. Apparently, Rupert Murdoch's cable television empire is still trying to turn the holiday into another excuse to promote conflict. Thankfully, polls show that the tactic isn't working.

Of course, using the word “holiday” in reference to anything around Jesus's birthday is apparently still seen as controversial in many quarters. Yes, in the same Fairleigh Dickinson poll, two thirds of respondents want “Merry Christmas” rather than the more universal “Happy Holidays” used as the season's greetings. Similarly, only about a quarter of Americans believe public schools should host non-religious events instead of explicitly religious Christmas festivities.

This, alas, is the residual bad news in the aftermath of the “War on Christmas,” for it embodies a my-way-or-the-highway narcissism that runs counter to the nation's founding principles.

Remember, this is supposed to be a country that respects everyone's right to their own religious traditions. While there are certainly lamentable instances of overt religious persecution here in America (see sporadic attacks on mosques), we for the most part do a decent job of respecting people's basic right to worship. However, respect also involves an awareness that not everyone is—or has to be—of your particular faith.

The opposite of that is the definition of presumptive—or worse. Sometimes, the demands for “Merry Christmas” and Christmas-themed school-celebrations seem like aggressive attempts to deliberately make people of other traditions feel like they are outsiders. And not just any old outsiders, but outsiders who are so unwelcome that their participation in another religious tradition shouldn't even warrant the most minimal form of civility—like, say, a more inclusive salutation.

In this week that is supposed to serve as a respite from the culture wars, ask yourself: Is that the kind of society you want to live in—one in which holidays that aim to celebrate love and inclusion instead become yet more occasions to promote exclusion?

If you are one of the few who somehow believes that there is a “War on Christmas,” then perhaps your answer is “yes.” But as we take a quiet moment to contemplate the upcoming new year, the answer for most us should be a resounding “no.”