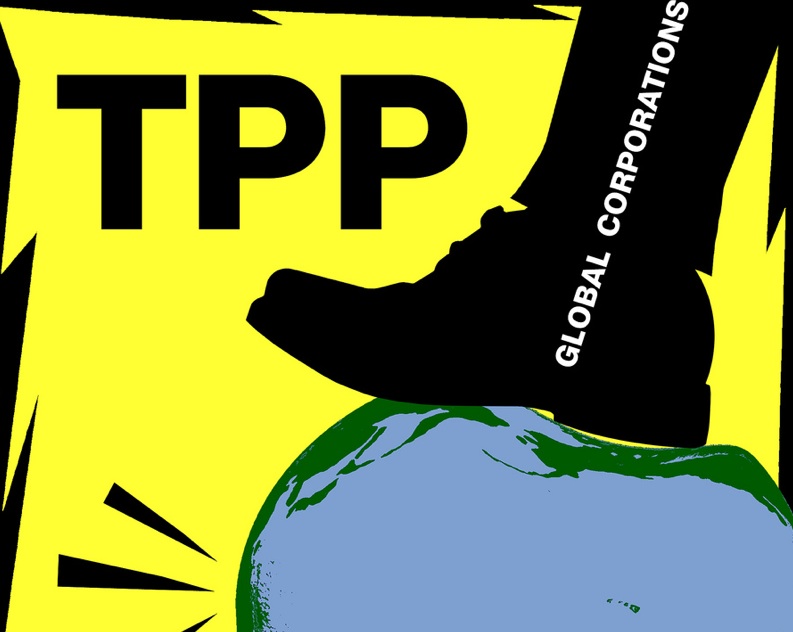 The Next Corporate-Friendly Trade Pact

With the TPP facing Congressional scrutiny, the U.S. presses forward on another deal.

Critics on both sides of the Atlantic are worried the agreement will eventually settle for the lowest common denominator—some kind of nightmarishly corporate-friendly mix of European financial regulations (there’s no Dodd-Frank in the EU) and American regulations on the environment and food safety (the EU bans GMOs, hormone-treated beef and chlorine-washed poultry products).

It’s been a rough few months for the United States Trade Representative (USTR), the federal agency that hammers out U.S. trade policy. By year’s end, negotiators were expected to be putting the finishing touches on the Trans-Pacific Partnership (TPP), an agreement covering Pacific Rim economies such as Australia, Japan, Singapore and Malaysia, while quietly making progress on a brand-new, long-heralded trade pact with the European Union: the Transatlantic Trade and Investment Partnership (TTIP).

But public awareness of the TPP—a sweeping, secretive deal that critics call “NAFTA on steroids”—quickly evolved into public backlash. That uproar, in turn, helped fuel a mini-rebellion in Congress. Last month, 151 House Democrats signaled their opposition to fast-tracking the deal, stymying any hope that the TPP—or an eventual trade pact with the EU—will pass in the form that negotiators want. Meanwhile ongoing revelations of the United States’ global spying habits have thrown an unexpected wrench into negotiations with Europe. As the European Parliament moves to draft new stricter rules on data protection, the tech industry and its allies in Congress are pressing American negotiators to combat “digital protectionism.”

It was in this delicate context that negotiators met in Washington on December 16 for the third round of TTIP talks.

Much like the TPP, the TTIP isn’t about eliminating traditional trade barriers such as tariffs. U.S. and EU tariffs already average less than 3 percent, some of the lowest in the world. Instead, the buzz phrase that TTIP advocates like to use is “regulatory harmonization.” The U.S. Chamber of Commerce, for its part, calls for “regulatory coherence” and “regulatory cooperation.” Essentially, it’s all about better matching up U.S. and European regulations on a broad range of matters: financial services, environmental issues, labor relations, car safety, online data protections and even the chemical make-up of cosmetics—though it remains unclear what exactly would be covered in any final agreement.

On the face of it, standardizing regulations isn’t inherently bad. The European Union, after all, has some of the most progressive regulations on the globe. But critics on both sides of the Atlantic are worried the agreement will eventually settle for the lowest common denominator—some kind of nightmarishly corporate-friendly mix of European financial regulations (there’s no Dodd-Frank in the EU) and American regulations on the environment and food safety (the EU bans GMOs, hormone-treated beef and chlorine-washed poultry products).

While the secretive negotiations have left the details of “regulatory harmonization” up to the public’s imagination, one indication of what it may actually entail came in a recent leak about the EU’s desire to create a “Regulatory Cooperation Council.” The hypothetical super-agency would be charged with evaluating existing regulations in both partners and coordinating any future rules, subjecting some to a “cost-benefit” analysis of their impact on trade. Under the proposal, the U.S. would be required to notify the special council of any upcoming regulations from federal agencies and allow the EU to comment. That would only further delay what’s already a frustratingly slow federal rulemaking process, critics say.

Another potential TTIP provision that has critics alarmed is so-called “investor-state dispute settlement.” Negotators on both sides are pushing for these corporate protections, which already exist in free trade agreements like NAFTA and many bilateral investment treaties. They allow corporations to sue governments in special third-party tribunals that have the ability to bypass domestic laws. That’s how, for example, a Canadian mining company chartered in Delaware recently filed a lawsuit against the Canadian government after Quebec’s 2011 ban on fracking in the bed of the St. Lawrence River nullified its mining permits.

The inclusion of “investor-state” provisions in TTIP is of particular concern because of how deeply integrated the EU and U.S. economies already are. Together they include 75,000 cross-registered firms, according to the consumer advocacy group Public Citizen. Critics warn that investor protections in TTIP could lead to a surge in lawsuits challenging basic public-interest regulations and create a hostile climate for regulators.

Last week, a transatlantic coalition of labor unions, environmentalists and consumer protection groups sent a letter to the USTR and European Commission calling on the negotiators to drop investor-state dispute settlement from the trade talks.

“[Investor-state dispute settlement] is a one-way street by which corporations can challenge government policies, but neither governments nor individuals are granted any comparable rights to hold corporations accountable,” the letter read.

Thus far, the TTIP remains shrouded in secrecy. None of the draft texts from the three completed rounds of negotiations have been publicly released. Access on each side is restricted to the respective negotiating teams and a limited number of advisors, mostly from the business world.

At a press conference on December 20, In These Times asked the chief negotiators why they can’t simply release the draft text after each round of talks.

“The value of transparency is paramount in our mind,” said the USTR’s Dan Mullaney. “We do need, however, to give the negotiators space to have private conversations to negotiate in the U.S national interest. And so what we are achieving is a balance between giving those negotiators the space that they need to have frank conversations … and receiv[ing] input from the stakeholders.”

Negotiators did, in fact, take outside feedback at the “stakeholder presentations” on December 18 at George Washington University—the only event, other than the press conference, that was open to the media. Amid growing concern over the secrecy of the trade pact, the event marked the USTR’s efforts to demonstrate its accountability to the public.

For the roughly two-and-a-half-hour session, the USTR reserved five different rooms where representatives of various “stakeholders”—ranging from the AFL-CIO to Friends of the Earth to the National Pork Producers to Intel Corporation—could deliver speeches no longer than ten minutes.

Officially, the exercise gave interested parties an opportunity to make their case directly to negotiators. In reality, the event seemed more designed to fend off transparency advocates’ critiques than produce substantive engagement. More than one presentation had no negotiators in attendance. Meanwhile, stakeholders from the business world have had little difficulty getting a hearing on either side of the Atlantic: As of September, the European Commission had held 130 meetings with stakeholders—119 of those, or 93 percent, were with corporations and their lobbyists. The USTR hears from 700 different advisers on its official trade advisory committees, about 600 of whom represent business interests.

By contrast, “speed-dating” is how one stakeholder described the frenetic pace of the December 18 affair; another called it “musical chairs.”

“This is a joke,” says Robert Weissman, the president of Public Citizen. “We’ve had meetings with both of the lead negotiators, who talk about their desire to find creative ways to engage the public—to which we reply, well the first way to engage the public, creative or not, is to make the text public so people can actually see what’s being negotiated.”

“Personally, I feel a little bit annoyed by not having questions and discussion in the rooms,” says Helena Haldorf, a negotiator representing the European Parliament liaison office with the United States.

Nevertheless, the USTR and European Commission insist they’re trying to open up. “We are making a huge effort to implement deep transparency in this negotiation,” Mullaney said at the press conference.

For its part, the European Commission is holding a Civil Society Dialogue in January, where it will brief outside organizations on the state of the agreement and let them ask questions.

A date for the next round of TTIP negotiations has not yet been announced, and it remains unclear how long it will take for a deal to be completed. “We don’t have a timetable, except we’re going to move quickly, and we want to get it right,” Mullaney said.

That likely depends on what happens in Congress. As 2014 kicks off, the USTR is hoping to overcome its mass of House opposition with a major push for fast-track authorization legislation. Bills in the House and Senate are expected to be introduced any day, but given Congress’s busy legislative schedule for 2014, some observers believe the votes won’t actually take place until after the midterm elections.

In the meantime, opponents of the trade deals hope to counter the looming fast-track onslaught with a formula that’s proven successful so far: educating members of Congress and the general public alike about the depth of the corporate power grab the TPP and TTIP would facilitate.

“It still is the case that not many people, including many people in Congress, know about what these agreements are,” Public Citizen’s Weissman said on a conference call. “It’s hard to get your head around it because they provide these super rights to corporations that don’t seem plausible, but in fact do exist. And as people in Congress and in society learn more and more about this, I think there’s gonna be a bigger and bigger pushback.”