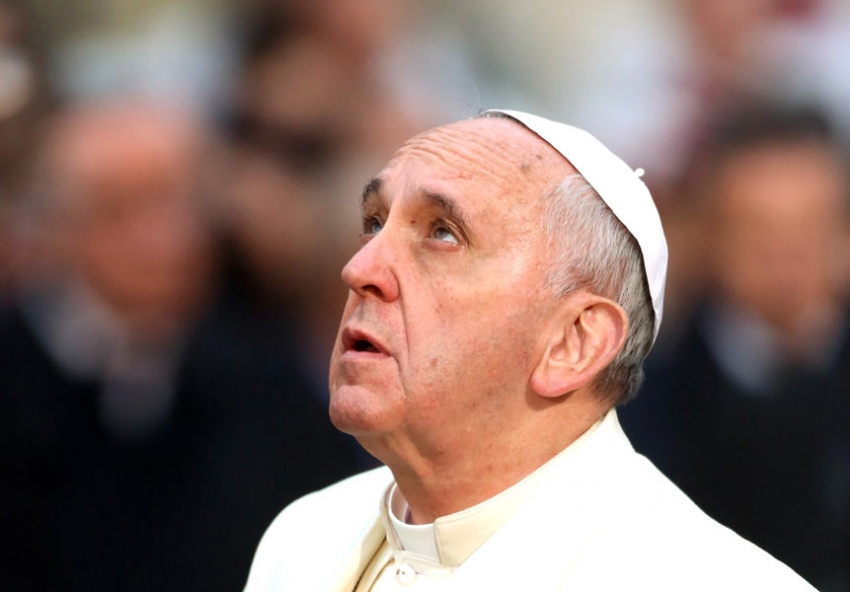 The Pope vs. Capitalism

But simple humility isn’t enough—Francis is also trying to enact a transformation, both within the church and outside of it.

Who is this Pope Francis? Time magazine named him “Person of the Year.” So did MTV’s 24-hour college network. And so did LGBT magazine The Advocate, calling him “the single most influential person of 2013 on the lives of LGBT people.”

Time said, “Francis has elevated the healing mission of the church—the church as servant and comforter of hurting people in an often harsh world—above the doctrinal police work so important to his recent predecessors.” Italian media nicknamed him the World’s Parish Priest.

Perhaps it was Elton John, though, who hit on why the new Pope has so captured the world’s attention. The pop singer called Francis “a miracle of humility in an era of vanity.”

The stories by now have become well-known: of a cardinal archbishop who cooked his own meals, rode public transit and made his own phone calls while serving in Argentina. He brought that same humility to the Vatican when he was elected pope last March. He is plainspoken and has rejected much of the papacy’s former pomp. He lives in a Vatican guesthouse, Room 201. He celebrates Mass daily with gardeners and cleaners.

But simple humility isn’t enough—Francis is also trying to enact a transformation, both within the church and outside of it.

The cardinal electors said they were looking for a holy man who could engage the wider culture and who could bring new life to the staid bureaucracy of the Vatican. They got that and more with Francis, who quickly set about the task of reform. One of his first moves was to assemble a council of eight cardinals to advise him on church reform, none of whom are Vatican insiders. He then took steps to clean up two of the most egregious areas of scandal in the church—its finances and its sexual abuse epidemic—by appointing a professional committee to oversee the corruption-stained Vatican bank and a commission of child protection experts to advise him directly on issues of clerical sexual abuse. Representatives from Francis’s council of cardinals have agreed the church must address procedures to deal with bishops who covered up abuse, whose relative impunity has been a source of great frustration among abuse-survivor advocates and ordinary Catholics. But why should anyone besides Catholics care about Francis’ reform agenda?

Greg Burke, a former Fox News Rome correspondent who advises the Vatican on communication policy, spoke to this question when addressing the Religion Newswriters Association in Austin, Texas in September. Despite the media’s portrayal of Francis, Burke said, this pope “is not a fan of cheap grace and feel-good religion.” While the media focus has largely been on Francis’ pastoral agenda, Burke said that he believes history will remember Francis for standing with the have-nots of this world.

And Francis has indicated that himself. In an interview with veteran Italian journalist Eugenio Scalfari about what he defines as the most pressing issues of the day, Francis said: “The most serious of the evils that afflict the world these days are youth unemployment and the loneliness of the old. … They have been crushed by the present. … This, to me, is the most urgent problem that the church is facing.”

Scalfari, an atheist and socialist, protested Francis’ answer, saying these are political and economic problems for states, governments, political parties and trade unions to address. Francis replied, “Yes, you are right, but [they] also [concern] the church, in fact, particularly the church because this situation does not hurt only bodies but also souls. The church must feel responsible for both souls and bodies.”

What Francis meant by this decree about bodies and souls was made clear in “The Joy of the Gospel,” his apostolic exhortation released Nov. 24, 2013, also known by its Latin title, Evangelii Gaudium. Francis writes that the mission of the church is to remove the desolation and anguish from the human heart—and when violence is caused by an unjust economic system, that system must be reformed.

But, a secular audience might ask, does the church have the power to fix these problems? Francis knows the potential the church has to bring structural change, and he wants all elements of it engaged. First and foremost, he has a membership of 1.2 billion Catholics whom he wants to inspire to personally commit to aiding the marginalized. The church sponsors and staffs thousands of Catholic schools and universities around the world, and Francis wants them all teaching the church’s social message. He wants graduates of these schools, who often hold key positions in nations’ civil and business spheres, grounded in his pro-social gospel. Catholics control a huge global network of social ministries—and all this gives its members an outlet to effect change.

Evangelii Gaudium provides clues as to what that change would entail. The document rails against the present global economic system, explaining that “such an economy kills.” A few highlights:

Political conservatives have largely written off Evangelii Gaudium. Most were subtler than Rush Limbaugh, who declared that Francis was spewing “pure Marxism,” but they were just as dismissive. In a representative response, Samuel Gregg, writing for the National Review Online, conceded that it is the pope’s place to denounce greed and plead for better care of the poor, but wrote that in most of Evangelii Gaudium, the pope is clearly out of his depth. “Evangelii Gaudium seems, alas, unaware [that] many poverty-alleviation methods that involve redistribution (such as foreign aid) are increasingly discredited,” Gregg wrote, and his condescension is almost palpable when he adds, “My critique is by no means intended to imply that all of Pope Francis’s observations about economic life are naïve or simply mistaken.”

The best response to these conservative critics, I think, came from my colleague at National Catholic Reporter, Michael Sean Winters. He wrote: “To be clear, the pope was not speaking of economic theory in the abstract. He was describing the world he sees and knows. Francis has never had the pleasure of attending a lecture at the pro-market Acton Institute, but he knows the slums. He was president of the Argentine Episcopal Conference during that country’s sovereign debt crisis. It may be true that there is no thoroughly unfettered market economy, but he has seen enough unfettering to garner what can only be deemed a stern, insistent and humanely sophisticated condemnation.”

Winters gets at the heart of what makes Francis’ economic message in Evangelii Gaudiumso resonant and why his words have a power that those of earlier popes did not have: Francis speaks with the authority of lived experiences.

Born Jorge Mario Bergoglio in 1936 in Argentina, Pope Francis came of age in a political climate that saw the rise and fall of the populist Juan Domingo Perón and his second wife, Eva Perón. Bergoglio was an adherent of so-called Peronism, which Francis’ biographer Paul Vallely describes as “a curious amalgam of forces not normally associated with one another: the military, the trade unions and the church.” In Pope Francis: Untying the Knots, Vallely writes that Peronism “had its roots in one of the major documents in the history of Catholic Social Teaching—an encyclical [from 1931] called Quadragesimo Anno” that sought to establish a potential third way between capitalism and communism.

Vallely also writes that from the time he entered high school, Bergoglio was expected to help support the family financially. While attending school, he worked in a series of jobs that included menial and manual labor. A working-class upbringing coupled with the Peronist influences of his early adulthood imbued Bergoglio with an understanding of labor and poverty that few in his clerical class have experienced.

Yet as a priest, Bergoglio formed a rigid, traditionalist theology and heavily pietistic spirituality that put him at odds with the emerging new theological movement that would be known as liberation theology. Liberation theology teaches that sin can reside inside societal structures as much as in a person and that the aim of the gospel is liberation of the world’s people from unjust economic or social conditions. As it developed in Latin America during the region’s military dictatorships in the 1960s and ’70s, it brought its adherents into direct conflict with the sometimes violent political structures of the day.

Such political aspects of liberation theology were off-putting to Bergoglio, who by 1973 was leading his Jesuit religious order in Argentina. Though he had a strong sense of charity for the poor and disadvantaged in Argentina, Vallely writes that his rejection of social justice put him in fierce conflict with many fellow Jesuits. Vallely details how Bergolgio spent the middle decades of his adulthood reconciling the divergent views.

His current worldview appears to have cohered, however, when he was archbishop of Buenos Aires and witnessed Argentina’s economic crisis of 2001. Even as he castigated the greed of individual politicians and business leaders, he also addressed the need for structural change. Vallely quotes from a statement issued by Bergoglio as parishes began to open food programs for the needy: “We are tired of systems that produce poor people so that then the church can support them.”

Vallely writes: “The man who was once the scourge of liberation theology began to see, as national leader, that there was weight to aspects of liberation theologians’ analysis that sin could reside in structures as well as in the bad behavior of individuals in positions of power.”

That explains much of how Francis has arrived at his current economic views. But again, why should non-Catholics care about those views?

Because Francis says in Evangelii Gaudium that his reform plan aims not at self-preservation but at fulfilling the church’s missionary mandate—removing the anguish caused by individual and social sin. Again, he’s trying to save bodies and souls. When he writes in Evangelii Gaudium that his reforms aim at bringing the full force of “the church’s customs, ways of doing things, times and schedules, language and structures” to meeting that mandate, he is committing the church’s full resources—those 1.2 billion adherents, thousands of schools and thousands of aid workers—to the cause.

And because he has the power to appoint bishops in dioceses across the world, from Chicago to Bougainville in Papua New Guinea, when Francis stands with the have-nots, he won’t be standing alone.

Dennis Coday is editor of National Catholic Reporter, an independent source of news about the Catholic church.