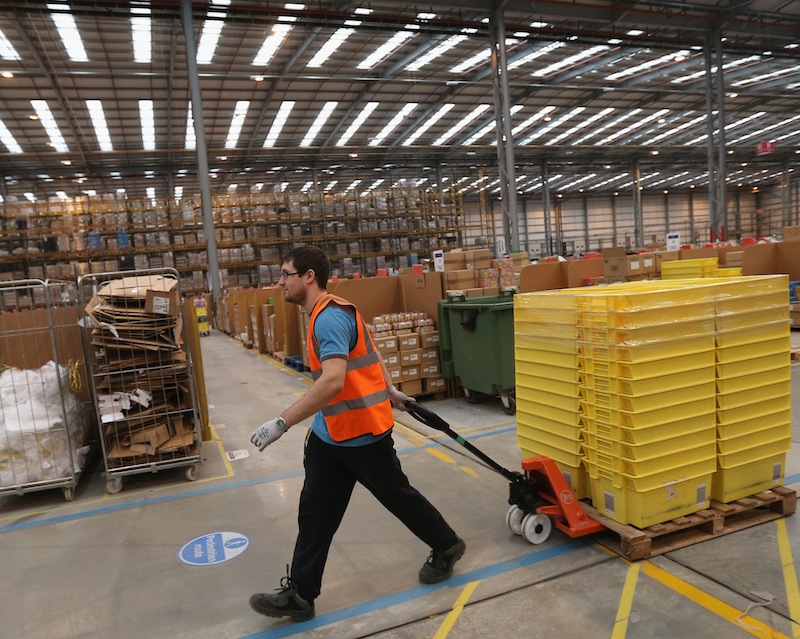 Working at Amazon.com sucks. Can unions do something about it?

Workers face authoritarianism from all levels of management: a 'pronounced hierarchy,' Sam says, that robs technicians of control over their own work. Instead, he says, they are overseen by people with no hands-on experience with the machinery they’re using.

Yesterday, 30 technicians at an Amazon.com warehouse in Middletown, Delaware voted in the e-retail titan’s first-ever union election in the United States. The vote marks the arrival on U.S. shores of a rising tide of Amazon worker organizing. Half a world away, more than 1,000 workers at three Amazon warehouse locations in Germany staged a string of one-day strikes from May to December of 2013, part of a campaign by the German service-industry union Ver.di to bring the company in line with the standards of the country’s offline retail industry.

The Amazon.com workers’ struggles are a crucial battle for labor on capitalism’s newest frontier: the high-tech takeover of traditional industries. Just when labor appears to be catching up with the turn toward service-industry employment—with the unionization of adjuncts in higher education, strikes at Walmart and fast-food stores, large-scale organization of taxi drivers, and Unite-Here’s victories in hotel organizing, to name just a few labor inroads—the ground is already shifting ominously beneath its feet.

Flush with investment capital, thousands of would-be Jeff Bezoses have set to work “disrupting” industry after industry in the same way Amazon has done for retail—applying the technologies of the digital age to cut labor costs, get around regulations and make work more precarious. As the struggles at Amazon’s warehouses illustrate, while information technologies may make old industries obsolescent, they are making the need for a strong labor movement greater than ever.

“It is a modern-day sweatshop.”

I’m talking with Sam (not his real name), a worker in the Middletown Amazon plant.

Sam is one of 24 workers who maintain the Moloch machine of belt conveyors, flat conveyors, flex conveyors, max-reach conveyors, motors, flat sorters, and assorted vehicles that ferry a river of commodities through the warehouse.

Though President Barack Obama recently delivered a speech in front of an Amazon “fulfillment center” in Tennessee extolling the company’s contribution to creating middle class jobs, the majority of positions in the warehouse are seasonal jobs that pay around minimum wage. And the work is not easy, as a series of high-profile exposés has shown.

According to Sam, the workers on the floor of the warehouse walk 20 or 30 miles a day. “Their rates [how rapidly they have to pick items] keep going up and up and up,” he says. “It’s all these bean counters who don’t care about machines breaking down and people breaking down. If you don’t make your rate by the third day, you’re written up. And on the fourth day, you’re fired.”

While technical workers are spared some of the worst of Amazon’s reported abuses, they have other issues to contend with.

A central issue in Amazon’s dispute with the German labor union Ver.di has been misclassification of workers. The union says the warehouse workers should be classified not as logistics workers, but as higher-paid retail workers. Sam alleges that misclassification resulting in lower pay is also an issue in the company's U.S. warehouses.

Adding insult to injury, workers face authoritarianism from all levels of management: a “pronounced hierarchy,” Sam says, that robs technicians of control over their own work. Instead, he says, they are overseen by people with no hands-on experience with the machinery they’re using.

“People who work in ‘carpetland’—office people—dictate our Standard Operating Procedures. They write these for us and they have zero maintenance background. It makes our job that much harder. We’re forgoing maintenance because someone tells us we have to,” Sam says. “If we hear a motor that’s going out, they’ll do an RTF, which is ‘run til failure.’”

This emphasis on short-term profit, he says, only creates more inefficiency in the long run.

“We aren’t given the time to actually fix things. We have to push it off to a Saturday night—when they shut down, hopefully—and then it’s very stressful for us and makes our jobs harder … The 20-minute fix it’ll take, they won’t give us the equipment for it … [so it] turns into a four-hour fix down the road.”

But what pushed the workers over the edge was being disciplined by a young manager for what they say are industry-standard ways of performing basic procedures, such as running conveyor belts. At first, Sam says, the workers tried to work within Amazon’s system to deal with the problem.

“We’ve actually had to go to human resources [about the manager],” Sam says. “We’ve reached out as high as we could to say it’s unanimous across the board.”

“The two days before we handed in the cards, they ended up ‘repurposing’ [the manager] in another role in another facility. They had already known about the cards. Somebody had leaked out what we were doing, and immediately they took action,” Sam says. “What lengths do you have to go to get people to listen? Our voices didn’t matter until we made the move that we made.”

Organizing by the book

On December 6, the IAM filed cards with the National Labor Relations Board requesting an election to represent the 24 maintenance mechanics at Amazon’s Middletown plant for the purposes of collective bargaining. With the filing, they kicked off a process that has played out thousands of times since the NLRB was created to mediate industrial conflict in 1935. Companies have figured out how to game the system, skirting or simply breaking the law to throw election votes in management’s favor.

In 2011, unions filed 2,108 petitions for elections at the NLRB. Of these, almost 700 were withdrawn before a vote could take place—in many cases because the employer’s anti-union campaign destroyed the possibility of a fair election. Of the 1,398 union elections that the NLRB did conduct, unions only won 69 percent. Filing for an NLRB election is a roll of a loaded dice. It’s possible to win, but only if the campaign can deflect a barrage of textbook anti-union maneuvers.

And so far, according to the union, Amazon’s anti-union campaign has stuck to the usual script, echoing the messaging it used to combat another drive more than a decade earlier. This time around, Amazon successfully pushed the NLRB to include six additional workers in other departments, who had not been involved in the organizing previously, in the bargaining unit. The union believes this was a tactic to dilute support.

Within a week of filing, the company also brought the anti-union law firm Morgan, Lewis, & Bockius onto the scene, according to the IAM. Higher-ups from Boston have arrived, too, Sam says, requiring workers to come in every week for what is commonly called a “captive audience meeting.” In these meetings, the union says, senior executives have asked workers to give them another chance, promised policy changes, tarred the union’s reputation and made subtle threats.

According to Sam, “In the beginning it was relaxed. They tried to pull us into a roundtable, which is a group meeting where they sit us down and they say, ‘What’s going on? We know stuff is wrong.’ Then they brought in some corporate people and they started giving us [reasons] why unions don’t work in Amazon … they’re bringing out all the bad propaganda with unions, as far as the striking process.”

As the weeks went on, the proverbial carrots and sticks multiplied. Previously, maintenance workers had always been excluded from in-plant raffles and contests, but in the past month, Sam says, particularly outspoken workers have mysteriously won prizes that include Amazon Kindles and a $500 gift certificate.

At the same time, multiple copies of an anti-union petition surfaced, the union says. The petition suggested “maybe we should table this”: another common management tactic to demoralize workers.

Managers also began following workers around, taking pictures of them as they worked in order to document compliance with safety procedures, Sam says. Violating a safety protocol can mean an instant firing.

The goal of an anti-union campaign is to create an environment so tense that workers simply want the union question to go away. In this case, the tactics worked. Yesterday's vote was 21 to 6 against unionization.

The IAM election at Amazon, while unsuccessful on the terms set by the NLRB, may prove to be an important step toward building a movement that can win. “The odds were stacked against the workers, but our presence there has really generated more interest,” says John Carr, the IAM organizer. “Even though unsuccessful this time around, a day later and the phone hasn't stopped ringing from other Amazon employees interested in what an organizing effort could do to assist them.”

If this plucky band of technicians can inspire other Amazon warehouse organizing, they may be able to established a foothold for labor in a company that has been called the Walmart of e-commerce—a sector that may soon displace bricks-and-mortar retail. Achieving these gains will require thinking outside the box of the NLRB process, and crucially, expanding organizing to include Amazon’s lowest-paid workers, the staff that picks and packs orders.

It will be a hard fight, but if economic trends are any indication, labor doesn’t really have any other choice. In a growing number of cities, “disruptive” industries have given corporations new ways to exploit workers. Brick-and-mortar schools and universities are threatened with obsolescence by the rise of “MOOCs,” short for “Massive Open Online Courses.” Taxi drivers now frequently compete with an unlicensed, freelance fleet of “Lyft” and “Uber” cars. Hotels face AirBnb. News outlets struggle against the Huffington Post.

Silicon Valley’s “disrupters” like to fancy themselves as geniuses and visionaries, but in reality, their “innovations” boil down to a familiar corporate formula: Circumvent regulations, undercut labor standards, automate in order to reduce labor costs, or commodify a niche of human existence previously out of reach of the market. And profit. Massively.

This expansion, in turn, will likely attract Wall Street investment and fuel massive expansion, leading to the eventual primacy of the new, “disruptive” companies over the old. The progression is almost inexorable.

But cracking the code to organizing Amazon—and all the progeny of “disruptive” capitalism—is not an impossible task. The workers have the same trump card they have always had. As Sam put it: “Without us, the building doesn’t run, and they don't see that. Or didn’t until we threatened to go through with the union organizing.” Every minute that the Middletown Amazon warehouse’s conveyor system is shut down costs the company $44,000 because packages have to be re-routed to other facilities and shipped via overnight delivery. Imagine what coordinated strike action, or even simply mass pickets at multiple plants could do?

As techno-capitalism innovates and disrupts its way back to 19th-century-style exploitation, workers are beginning to find their voice. The next step is to find a way to make this newest breed of bosses listen.

Full disclosure: The IAM is a website sponsor of In These Times. Sponsors have no role in editorial content.