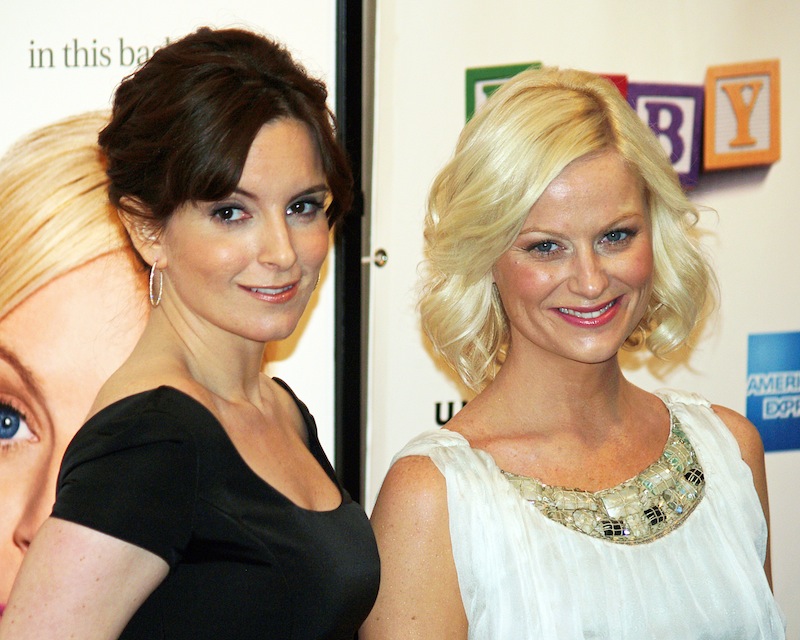 Tina Fey and Amy Poehler co-hosted the Golden Globe Awards for the second consecutive year—which, though the show has never had a solo female host, was enough to spark fears of a wholesale female takeover. (David Shankbone/ Flickr / Creative Commons

How the gender perception gap makes a female minority feel like a majority.

The heart of the problem is one of the strangest manifestations of male privilege: It actually seems to interfere with men's ability to count women. Specifically, it creates a tendency to actually see more women—or hear more female opinions—than are actually present at any given time.

Congratulations, feminism! It’s 2014—not even a hundred years since women won the right to vote in America—and already, the United States has been transformed into a man-loathing dystopia, where women rule all we survey, and men work night and day to appease us.

At any rate, this is what I gather from Fox News’ Brit Hume. With regards to New Jersey Governor Chris Christie’s growing reputation as a bully who takes disproportionate and petty revenge in response to any perceived slight, Hume opined that “in this sort of feminized atmosphere in which we exist today, guys who are masculine and muscular like [Christie] in their private conduct, kind of old-fashioned tough guys, run some risks.” Specifically, Hume says, “If you act like a kind of an old-fashioned guy's guy, you're in constant danger of slipping out and saying something that's going to get you in trouble and make you look like a sexist or make you look like you seem thuggish or whatever.”

Hume’s remarks, granted, are politics-as-tediously-usual; anyone who’s suffered through an electoral news cycle can see the gears grinding. Christie is an early front-runner for the 2016 Republican presidential candidate, with the Democratic nomination widely presumed to be Hillary Clinton’s for the taking. Much of Christie’s potential appeal to moderates and undecided voters comes from his positioning as a “reasonable right-winger”: a moderate, big-tent nice guy, capable of getting votes from Democrats when need be, known to praise (and even hug!) President Obama upon occasion without spontaneously combusting or turning into a pillar of salt. Therefore, the “nice guy” image is being dismantled by Christie’s opponents, and his vindictive, belittling, confrontational side is being dragged out into full view. Hume’s sexist feint—the idea that Christie’s personal cruelty is essentially and admirably male; male like every other President in history, male like Hillary isn’t—can clearly be read as a bit of re-positioning. By stirring up fears of female power, of a nation so “feminized” that being openly male can actually get you “in trouble,” he’s not-so-subtly rallying male voters’ insecurity, rage and entitlement, trusting them to cling tighter to Christie as they instinctively resist the idea of a woman holding the highest office in the nation. Men aren’t inherently thuggish and nasty, but people like Hume surely aim to make them act that way in 2016.

But the nightmare of a female-dominated world is not uniquely Hume’s. In fact, it’s not even uncommon.

Take, for instance, Kyle Smith's now-infamous review of the Golden Globes in the New York Post, which summed up the whole three-hour event with three words: “Too Much Estrogen!” Specifically, it was hosted by known estrogen-havers Tina Fey and Amy Poehler, who—in their 15 total minutes of screen time—lobbed “feminist joke-bombs” at the audience, remorselessly causing thousands to smirk, or perhaps even chuckle, at mildly risqué humor about famous men. (Smith was particularly offended by Fey's “and now, like a supermodel's vagina, let's all give a warm welcome to Leonardo DiCaprio,” because no straight man is ever more deeply wounded than when he is supposed to have frequent sex with beautiful and enthusiastic women.) Never mind that both “Best TV Series” awards went to male-run, male-led shows; that both “Best Picture” awards went to male-directed, male-led movies; that Best Director went to Alfonso Cuaron, Best Screenplay award went to Spike Jonze, Best Score went to Alex Ebert, Best Song went to the all-male U2, and the Lifetime Achievement Award went to Woody Freaking Allen; that, in fact, there was only one notable female winner outside of the female-specific “actress” categories, Frozen co-director Jennifer Lee, who was one-half of a half-male team accepting for “Best Animated Film.” Women were allowed to pass out the trophies that all those men received, and that constitutes a radical feminist takeover.

And it doesn't stop there. It's not just a matter of one corrupt politician getting punished for his “muscular” bridge-closing abilities, or one award show allowing women to ruin it with all their female yapping. Just a few days later, on Fox & Friends, author and self-described “philosopher” Nick Adams—along with his eager interlocutor, Elisabeth Hasselbeck—noted that the impending matriarchy has advanced so far that it poses a threat to American national security.

“It's really important, particularly given the leadership role that America has in the world, that American men be allowed to be men,” said Adams. And while I agree that all American men transforming into Chia pets, or perhaps moderately sized lumps of coal, would be problematic, this is not the problem Adams perceives: He believes feminism has resulted in “a mindset that seeks to squash male tendencies” and produces “feminine men,” men who are “effete, urbane metrosexuals” frequently seen “wrestling with lattes.”

“Do you see this affecting national security?” Hasselbeck asked.

So, there you have it: Women, having taken over politics, business and pop culture, are now bullying men into silence, mocking them for entertainment and quite likely going to kill us all. For further reference, you might check Time's cover image for their recent piece on Hillary Clinton, which graphically demonstrates one of the preferred matriarchal execution methods: Growing to the size of a skyscraper and crushing a man to death with one's high heel.

But, while it’s fun to mock these Revenge of the Women fantasies, one should consider that even the strangest paranoia often stems from some genuine threat. Which is to say: If these men are afraid of women taking over, it might be worth considering their evidence. Which is not entirely insubstantial—it just doesn't say quite what the conspiracy theorists think it does.

While women are far from equally represented in media—the Byline Survey Report finds that white men still comprise the vast majority of staff journalists, with white women in second place, and people of color of both genders lagging way behind; women are underrepresented in all areas but “pink topics” (the deadly Four F's: food, fashion, family, and furniture)—these days, there are indeed some women in media, and even some women-dominated and feminist-friendly sub-sections on major online  media hubs such as The Atlantic, Slate and Gawker Media. While feminism is far from uncritically accepted by every member of 21st-century society, some feminist members of society are much more audible now, thanks to the self-publishing power afforded by social media and the vocal feminist communities found on sites such as Tumblr and Twitter, where it's easy for messages to be reblogged, hashtagged and RT'd beyond the scope of the social groups in which they originated. Not every movie released this year is a paradigm of ideal intersectional feminist representation, but three of the biggest, Gravity, Frozen and Catching Fire, were unconventional female stories featuring unconventional female leads, and one of them had a female co-director. And while it's not that men everywhere are quivering in sweaty fear at board meetings, facing the icy stares of their all-female managers and co-workers, nor that every man who says something sexist gets called out and ripped to shreds, some sexist men—and some sexist comments—do in fact get called out.

So how do you get from some feminism, some of the time, to a feminized society?

The heart of the problem is one of the strangest manifestations of male privilege: It actually seems to interfere with men's ability to count women. Specifically, it creates a tendency to actually see more women—or hear more female opinions—than are actually present at any given time.

Geena Davis Institute for Gender In Media found that, in crowd scenes, women tend to comprise about 17 percent of any given crowd. She's argued, based on outside data and her own interpretations, that this imbalance relates to and reinforces the way men perceive the actual number of women in any given room.

The idea of a gender perception gap is borne out by studies in other areas. In one study on gender parity in the workforce, sent my way by colleague Flavia Dzodan, it was found that men “consistently perceive more gender parity” in their workplaces than women do. For example, when asked whether their workplaces recruited the same number of men and women, 72 percent of male managers answered “yes.” Only 42 percent of female managers agreed. And, while there's a persistent stereotype that women are the more talkative gender, women actually tend to talk less than men in classroom discussions, professional contexts and even romantic relationships; one study found that a mixed-gender group needed to be between 60 and 80 percent female before women and men occupied equal time in the conversation. However, the stereotype would seem to have its roots in that same perception gap: “[In] seminars and debates, when women and men are deliberately given an equal amount of the highly valued talking time, there is often a perception that [women] are getting more than their fair share.”

How do you give men the impression of a female majority? Show them a female minority, and let that minority do some talking. This is how 15 minutes of Fey and Poehler becomes three hours of non-stop “estrogen,” how a Congress that's less than 19 percent female becomes a “feminized” and male-intolerant political environment, and how one viable female Presidential candidate becomes an unstoppable, man-squashing Godzilla. Men tend to perceive equality when women are vastly outnumbered and underrepresented; it follows that, as we approach actual parity, men (and Elisabeth Hasselbeck, for some reason) will increasingly believe that we are entering an era of female domination.

Everything depends on the perception gap: On that ancient, long-enculturated sexist logic, which dictates that, when it comes to women and power, some is enough and enough is too much. The logic which tells us that the only environment not at risk of being “feminized” is an environment with no women in it.

And if that's our option, well: I say, all hail the matriarchy. Sure, it will mean suffering through a few more years of sexist men having embarrassing, public meltdowns about how women are running everything and ruining their lives. But we can rest secure in the knowledge that, statistically speaking, we probably won't be ruining those men's whole lives, or even most of them. We'll probably only ruin about 33 percent.