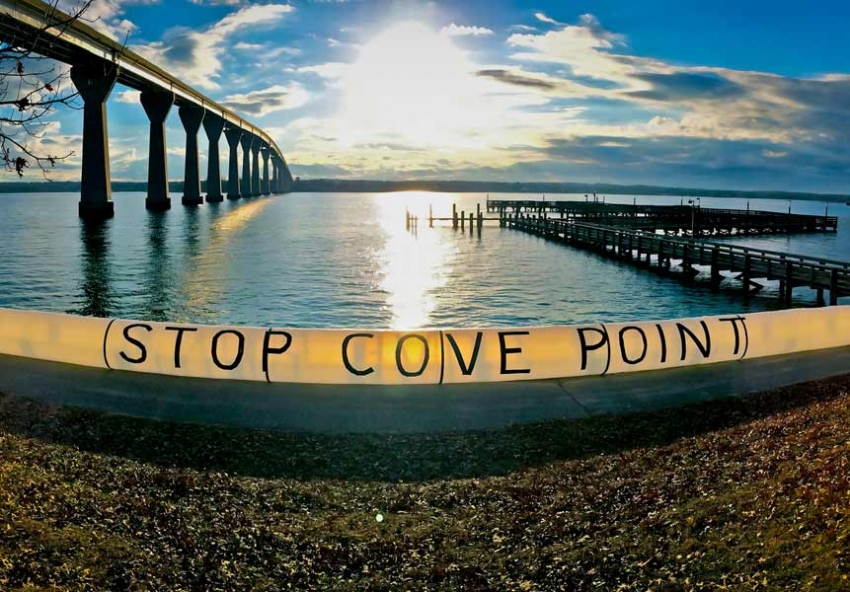 Keystone by the Bay

Labor and environmental groups clash in Maryland over fracking.

In order to break this jobs vs. environment deadlock, 'We can’t just say, "Don’t build this." We have to be able to say, "Build this instead."'--Joe Uehlein, director of the Labor Network for Sustainability

In tranquil Calvert County, Md., environmental activists are up in arms about an energy company’s plan to construct what they call “the next Keystone XL” on the shores of the Chesapeake Bay. Energy giant Dominion Resources, like Keystone operator TransCanada, is hoping to cash in on soaring demand for U.S. fuel exports, but the proposed facility at a peninsula called Cove Point would export not oil but natural gas, pumped from the fracking fields in neighboring states, then “liquefied” at the plant and shipped thousands of miles overseas to India and Japan.

The proposed “liquefaction” project, which involves cooling the gas to -260 degrees Fahrenheit before it is poured onto tankers for export, is also chilling an already-frosty relationship between some local unions and environmental groups. On January 8, a coalition of environmental groups gathered outside the State House in Annapolis to protest the project, holding up signs emblazoned with blue crabs and striped bass to represent the risks to the Chesapeake’s delicate ecosystem. Environmentalists also fear Cove Point will encourage the advent of hydraulic fracturing in Maryland, which they say is every bit as dirty as coal, once the pollution at each stage of the production process is factored in.

On the same day, inside the State House, about 75 members of energy and construction unions, clad in blue T-shirts with the slogan, “Jobs for Maryland: Support Cove Point Project,” gathered to push for the project, which they say will create thousands of jobs.

The Cove Point project is just one of dozens of liquefaction projects in the works in coastal areas across the country. Thanks to a fracking boom, the United States is now producing record amounts of natural gas, and energy companies see a potential windfall in overseas markets hungry for cheap fuel. Even as new export plants await federal permits, major energy companies have already signed closed-door deals to ship more than 12 million tons of liquefied natural gas (known as LNG) overseas annually, according to a recent investigation by Reuters.

“There are so many [LNG] proposals that it’s hard to keep track of all of them right now,” says Phil Aroneanu, managing director and co-founder of the climate action group 350.org. “There’s not much in the way of regulation on natural gas right now, but the industry knows it’s coming, so they’re trying to get all the infrastructure built and grandfathered in before regulations are put in place.”

350.org has worked for years to stake out the Keystone XL pipeline as a defining issue in the battle against climate change, but with fracking quickly emerging as a new flashpoint, the national group is doubling down this year on efforts to help local groups stop LNG export terminals in Maryland and the Pacific Northwest. Meanwhile, unions in the beleaguered construction industry are hoping to ride the fracking boom by securing union jobs in the drilling and transport of natural gas, an industry that is largely non-union at present. This has set the stage for a reprisal of the same blue-green tussle that ensued over the Keystone XL pipeline, and created a scenario where even as a growing number of unions express concern about climate change, they consistently back the fossil-fuel industry's attempt to forestall clean-energy policy through construction of new fossil-fuel infrastructure.

Dominion Resources says that the Cove Point project will create 14,000 long-term jobs in addition to 3,000 short-term construction jobs, and has signed onto an agreement with the AFL-CIO’s Building and Construction Trades Department (BCTD) stipulating that a majority of the work on the proposed Cove Point terminal will go to union members. Construction unions secured a similar pledge for a proposed $6 billion LNG project in Warrenton, Ore. Environmental organizers are skeptical. “Natural gas companies always paint a very rosy picture of the economic benefits that their projects will have, and yet they always fail to deliver,” says Jorge Aguilar of Food and Water Watch, which has been organizing against the Cove Point expansion. A November 2013 analysis by the Multi-State Shale Research Collaborative, a coalition of policy groups who oppose fracking, found that fewer than four jobs had been created for each new well drilled in the Marcellus Shale region between 2005 and 2012, even though industry-financed studies have claimed that fracking creates as many as 31 new jobs per well.

So why is labor along for the ride? According to Sean Sweeney, founder and co-director of the Cornell Global Labor Institute, one group of unions has become locked into a “transactional relationship” with the oil and gas industry, the result being that once-strange bedfellows are now permanent partners. In 2009, 15 unions joined the pro-fracking, pro-Keystone “Oil and Natural Gas Industry Labor-Management Committee,” a partnership with the industry lobbying group American Petroleum Institute (API). Last year, local energy and construction unions joined business groups to support fracking during tussles over regulation in the Illinois and Pennsylvania legislatures. And in New York state, pro-fracking unions such as the International Brotherhood of Electrical Workers (IBEW) spent $1.4 million on lobbying in favor of expanded fracking between 2007 and 2013, according to watchdog group Common Cause.

Asked whether this leaves unions and environmental groups on a permanent collision course, Joe Uehlein, director of the Labor Network for Sustainability (LNS), is adamant that in order to break this jobs vs. environment deadlock, the environmental movement needs “a jobs plan of its own.”

“We can’t just say, ‘Don’t build this.’ We have to be able to say, ‘Build this instead,’ ” he notes. In a November 2013 report, his group outlined a plan to repair existing water and natural gas infrastructure that it estimated would create more jobs than the Keystone XL pipeline. Uehlein believes that the same logic applies to fracking, and that labor groups in Maryland would be ultimately better off campaigning for infrastructure upgrades rather than throwing their weight behind the Cove Point project.

The problem, says Uehlein, is that “the shovel-ready projects are the ones backed by corporate money. The jobs in repairing our infrastructure, in investing in renewables, we need to organize for those. But the future for Maryland is in [labor and environmental] groups working together for more windpower, more solar and a higher renewable energy standard.”

Canada’s Unifor provides one promising example of what a unionism that advocates for both workers and the environment might look like. Formed last fall from the merger of the autoworkers and paperworkers unions, Unifor is now the largest private-sector union in Canada, and its founding charter spells out a commitment to broader progressive values. In a September address to Unifor’s founding convention, Canadian author Naomi Klein called on the new union to also tackle climate change. Although 20,000 of Unifor’s members work in the energy sector, the union has issued a call for a national moratorium on fracking and expressed support for First Nations communities who protest drilling on their land.

“We have a lot of concerns around the Gold Rush-type situation happening in fracking right now,” says Lana Payne, UNIFOR's Atlantic Region director. “When that happens, [worker] health and safety often aren't at the top of the list.”

Indeed, for U.S. energy-sector unions, one of the most compelling arguments against fracking may be the workplace hazards involved in the process, including exposure to silica dust, which when inhaled can cause silicosis, an incurable and often deadly lung disease. In June 2012, the National Institute for Occupational Safety and Health issued a hazard alert after a field study found that nearly 80 percent of air samples from fracking sites had higher-than-permissible rates of silica.

Given the risks to worker and community health, the Cornell Institute's Sweeney believes that labor must take a stronger stance on fracking and natural gas exports. “The clock is ticking, and the labor movement has to make a decision,” he says. “Is it going to play a progressive role and help rebuild the movement, or is it going to go along with corporations who are happy to drill and mine and suck everything out of the earth?