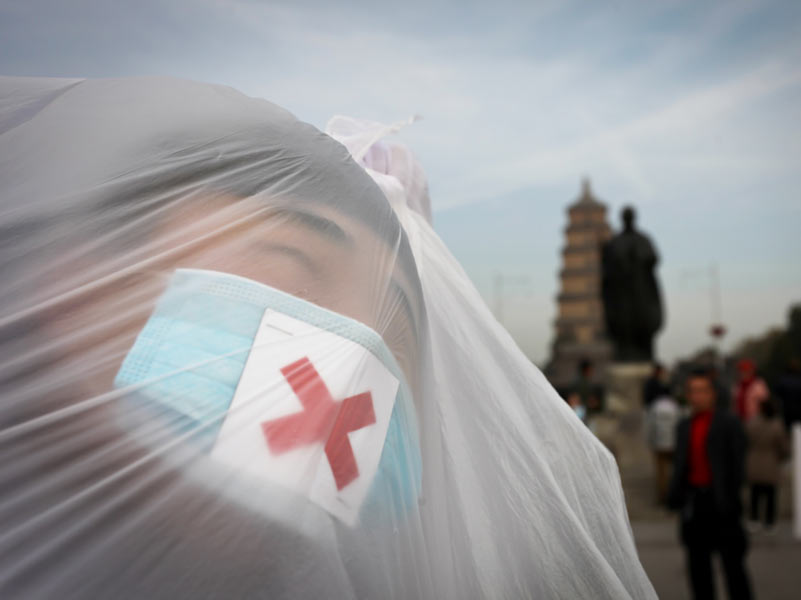 Environmentalists cut through the smog of state repression.

Even if the need to pacify an angry public can motivate the central government to clean up pollution, its concurrent interest in driving economic growth puts constant pressure to boost regional investment and GDP.

Last year was a banner one for apocalyptic environmental headlines out of China. Photos from the “Smogpocalypse” showed masked figures haunting pollution-choked Beijing streets. Blizzards of particulates grounded flights. One popular snapshot depicted a sunrise televised on a wide outdoor screen against a hazy backdrop, stirring speculation (later debunked) that daylight-starved residents had resorted to an artificial sky.

Within China, too, these images sparked outrage. Legions of youthful netizens used social media to blast out photos of themselves in respirator gear and panda face masks. This digital protest, subtly disruptive and cleverly anonymous, reflects the carefully contained but vital energy of China’s environmental movement.

You wouldn’t know it from the Western media’s sensational depictions of the country’s Malthusian environmental degradation, but in the past decade, China’s green movement has grown. It’s picked up support from everyday citizens, from middle-class parents worried about their children’s asthma to frustrated fishermen whose catches have been lost to riverbed contamination. As wealth levels have risen, so has public disgust with the by-products of explosive industrial development. Thousands of groups have rallied around environmental health, conservation and energy issues, and a fresh crop of activists—some affiliated with formal organizations, others simply concerned about continuing to breathe—are channeling that consciousness through social media and grassroots protest campaigns. In doing so, they are pushing the boundaries of permissible dissent and winning incremental victories. Since 2012, when the Ministry of Environmental Protection began an air-monitoring program amid public frustration with smog, the number of cities in China that publish real-time air-quality data has grown from 60 to at least 179. Thousands of factories are now also required to publicly disclose air and water pollution data.

Alongside the emergence of a digital movement to protest pollution, the past few years have also seen communities rise up against local industrial projects. In late 2011, residents of the Guangdong fishing town of Haimen rallied and blocked traffic for days to oppose plans to expand a coal plant, claiming that pollution was damaging public health and decimating fish stocks. Police responded at first with beatings and tear gas, but the authorities later yielded, agreeing to release detained protesters and temporarily suspending the plans. In May 2013, in the western city of Kunming, hundreds turned out to protest China National Petroleum’s plans to build a plant 40 kilometers from the city center that would emit the toxin paraxylene. Their faces covered by symbolic protective masks, they flashed “anti-PX” picket signs in photos that circulated widely on the web voices to environmental policy discussions long dominated by insular officials and state-controlled media. Yet both exert limited influence on how policy is constructed and carried out. In a country where citizens lack institutional channels to orchestrate change, it remains to be seen whether microblogging mobs or public demonstrations will add up to an environmental overhaul. Though increasingly sophisticated, the movement-at-large still negotiates with the government through threats of disorder rather than a shared goal of environmental justice.

The “not-in-my-backyard”-style protests that take aim at local projects tend to prompt short-term concessions rather than systemic change. For example, though the uprising in Haimen made waves in the media, the protests only delayed the expansion of the coal plant until the outcry subsided.

Yet there’s some evidence that China’s embarrassing international image as a country choked by air pollution might be prompting official action. The government launched a $277 billion initiative last September that would cap the building of new coalfired power plants in certain regions, particularly the central cities Beijing, Shanghai and Guangzhou.

But even this sweeping-sounding initiative merely shifts the problem elsewhere. Chinese environmental advocates and global groups such as Greenpeace International warn that absent a total industry restructuring, cleaning up high-profile cities won’t taper the country’s greenhouse gas emissions. Coal companies are simply shifting operations toward less populated, investment-hungry provinces in northern and western China. Ailun Yang of the environmental think tank World Resources Institute notes in a policy analysis that “more than 80 percent of the proposed projects [slated in 2012] are currently exempt from the ban and special standards.”

To go beyond NIMBY-ism, environmental groups must contend with China’s runaway industrial expansion and neoliberal growth, responsible for both the country’s rise to an economic superpower and its massive ecological devastation. That’s a tall order.

Even if the need to pacify an angry public can motivate the central government to clean up pollution, its concurrent interest in driving economic growth puts constant pressure on town and city officials to boost regional investment and GDP. Were Beijing to impose tighter environmental regulations, local governments might simply ignore them, according to Li Bingqin, professor of public policy at Australian National University. Local policymakers see central government mandates as “guidelines to be manipulated to serve their own interests,” Li writes in the journal Environment and Urbanization. As long as citizens are shut out of the local decision-making process, officials will coddle business rather than the ecosystem.

China’s more radical environmental groups face overt state repression. Since entering office in 2013, President Xi Jinping’s administration has tightened the government’s grip on dissent, ramping up online censorship and arresting political activists. Though the government’s primary concern is prodemocracy agitators, environmentalists are experiencing a chilling effect as well. According to Isabel Hilton, editor of the London- and Beijingbased environmental journalism hub ChinaDialogue.net, recent reports reveal that “in terms of the freedom of [non-governmental organizations] to operate, to challenge, to mobilize, [activists] have been more restricted than they were in the past.”

On top of intensified Internet surveillance, the latest draft revisions to the national environmental protection law suggest a potential judicial clampdown. Critics say that certain provisions could silence activists by blocking NGOs and citizens from suing polluters. This litigation process is one of the few legal avenues for victims of pollution to seek compensation for health damages and for advocates to push stronger regulation.

But the seemingly binary goals of generating jobs and limiting environmental harm are not irreconcilable—environmental crises could drive policy changes down a greener, more sustainable path, even if the motivations are purely economic.

China’s coal industry—which now leads the world in consumption and production, ahead of the United States—is starting to slump on its own due to the global recession. And though renewables make up a small fraction of China’s energy supply, the country is the world’s largest producer of solar power equipment and ranks third in solar capacity, according to the UN Environment Programme.

China’s green industries have the potential to add several million jobs in the coming years, such as turbine manufacturing and rail transit, according to the D.C.-based environmental research group WorldWatch Institute. And since China is a major carbon emitter, international groups like the Natural Resources Defense Council and Greenpeace are campaigning there to promote renewable energy sectors that could foster both a Chinese and global transition from fossil fuels.

The challenge is that “green growth” under an authoritarian regime can easily barrel ahead irresponsibly, without corporate accountability or public review. After China’s solar manufacturing exploded, for example, “overinvestment” in the sector reportedly disrupted the global market, driving down prices and undercutting other countries’ producers. At the same time, solar-panel factories have been criticized for causing local soil and water contamination. In other words, “clean” energy industries can still be really dirty.

Meanwhile, China’s citizens are learning the difference between truly sustainable environmental solutions and greenwashed corporate agendas. Last summer, in Heshan, a southern city in the Pearl River Delta, protesters staged a mass demonstration against a purportedly green power project— a $6 billion nuclear plant that local officials had billed as an “industrial park.” Some 1,000 protesters took to the streets, having organized through online messages inviting people to an “innocent stroll.” The protesters faced down riot police with anti-nuclear signs displaying the slogan, “We want children, not atoms.” Within days, the preliminary planning for the nuclear project was halted “in order to fully respect the opinion of the masses,” according to a government statement.

The innocent stroll hadn’t led to revolution, but it did raise pivotal questions for China’s environmentalists. High-profile protests of recent years have been reactive, focused on immediate environmental harms. But looking ahead, they will have to seek sustainable, policy-driven solutions, perhaps starting with demands for transparency and democratic environmental planning.

In the wake of the Heshan action, one local microblogger, in a comment reposted on the international news site Global Voices, captured the air of uncertainty: “The dispute has been settled, but who will know [when or where] the project might start again in the future? Please do not test the [limits] of the people of Jiangmen and Pearl River Delta. My home belongs to the Delta.”

How far will activists like those at Heshan go? As the public’s social awareness and expectations of responsive government grow, so will their concerns about environmental sustainability. It will surely become increasingly difficult for officials to appease protesters with temporary, piecemeal concessions. The question China’s green activists face today is how to translate rising unrest into systemic change. That will require fusing political citizenship that agitates for fair governance with ecological citizenship that agitates for environmental stewardship. More challenging still will be forcing Beijing to understand that these ideals are not mere political disruptions, but rather pillars of balanced development and a more just society.