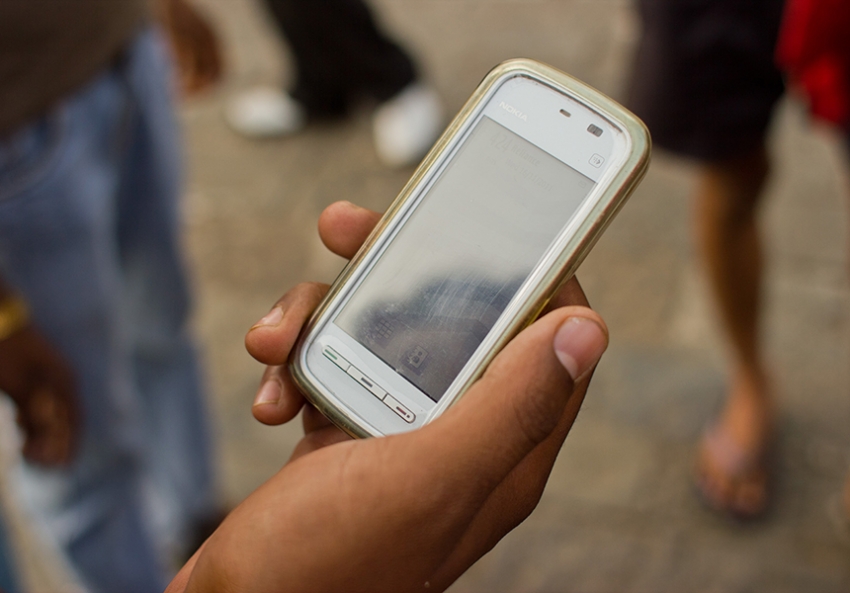 Low-income people of color often only have access to the Internet via mobile devices, meaning they will be the demographic hardest hit by the downfall of net neutrality. (Victor Grigas / Wikimedia / Creative Commons)

Why the Internet Will Soon Be Two-Tiered

Low-income people of color stand to lose the most from the erosion of net neutrality.

Informational freedom advocates say the decline of net neutrality—and AT&T’s policy in particular—could, in effect, create yet another sector of American society where information and access to platforms of influence are boutique commodities.

Net neutrality—the principle that all content on the Internet must be treated equally by service providers and the government—may not be long for this world. After anemic attempts at preserving net neutrality by the Federal Communications Commission, a recent court ruling has opened the door for mobile network providers to get what they have long sought: namely, the ability to discriminate when it comes to websites’ loading speed and availability.

Though FCC Chairman Tom Wheeler recently stated the commission plans to write new net neutrality guidelines that will hopefully survive legal challenges, it remains to be seen how any of these will hold up in court. In the meantime, Americans’ access to a free, unfettered Internet will almost certainly continue to be tested.

Over the past few years, a great deal of attention has been paid in the press to net neutrality’s potential collapse. Much of the analysis, however, has focused on its importance for maintaining anticompetitive business practices and the need to create a level playing field online for small businesses and Silicon Valley “disrupters.” What has received far less attention are the ways in which the destruction of net neutrality will add to America’s inequality crisis.

In his most recent State of the Union address, President Barack Obama promised to tackle the vast social and economic disparity among Americans. But one of the Obama administration’s early policy disappointments—his FCC’s flawed approach to net neutrality—may soon lead to that same inequality gap being manifested online in the form of a two-tier Internet.

A 2010 FCC decision did appear to enshrine net neutrality as a fundamental principle of how the Internet operates: The government agency enacted a federal mandate that no Internet service providers could block or slow users' connections to sites and apps.

But appearances can be misleading. That 2010 ruling allowed for major exceptions to net neutrality, particularly around mobile networks. And in January, at the D.C. Circuit for the U.S. Court of Appeals, Verizon exploited these loopholes to successfully challenge the legality of enforcing net neutrality for cell phone Internet. In theory, unless the FCC acts quickly, providers such as Verizon and other mobile carriers could conceivably decide to privilege the delivery of some sites over others—a devastating blow for people who rely on cell phones to get online.

When it comes to accessing the Internet, mobile-phone networks are of particular importance to marginalized communities, including people of color and those with lower incomes. A recent Pew survey found that a full 21 percent of cell phone owners in the United States mostly use their phones to access the Internet, as opposed to a desktop or a laptop. The elimination of net neutrality for cell phones could make conducting essential activities, such as applying for jobs or furthering one’s education, much harder if service providers chose to block access to those necessary sites.

The Pew study also found that “young adults, non-whites, and those with relatively low income and education levels are particularly likely to be cell-mostly Internet users”—and ­it’s people in those demographic groups who will therefore be stuck at the lowest tier of access. Advocacy groups also worry that ISPs will use their powers of prioritization to silence activists working toward social justice, particularly in communities of color.

One specific example of how this might play out is with AT&T’s soon-to-be-launched sponsored data plan. Currently, most customers must adhere to a data usage cap or risk paying overage fees. But under the “sponsored data plan,” rather than forcing an AT&T user to drain their monthly data allocation while they, say, scroll Facebook, the social media giant—or any company—could pay for that usage on their behalf to AT&T. In other words, as far as users are concerned, Internet access to certain sites would essentially be free.

In theory, this sounds great. More traffic for tech companies to their products and a lower phone bill for consumers. Win-win, right?

Perhaps, until one considers the fact that not all websites on the Internet are able to sponsor their data in this way. As a result, we will be creating an Internet in which users are motivated to peruse the sites of larger and wealthier companies compared to those with fewer resources.

According to Steven Renderos, national organizer for the Center for Media Justice, “AT&T's data plan would create the incentive for websites to pay for the data usage customers rack up on their website in order to steer the customer towards sites that won't use up their limited data plans.” As a result of this process, he says, the Internet will more closely resemble cable television, with independent voices and outlets pushed to the margins.

And that’s the best-case scenario. But what happens when a consumer isn’t able to pay for any data plan or can only afford a low cap? With AT&T’s “sponsored data,” this customer would still be able to use the Internet—but it could look very different from that of a user who has no such constraints.

This “commercial” Internet, which everyone would have access to, would be comprised solely of the companies that can afford to pay for all those users’ data. And based on the current practices of many web giants, the majority of those mega-corporations would likely be online retailers or sites that track (and monetize) users’ every interaction. The world of independent blogs, alternative media, job boards, and online courses would become an Internet luxury.

With cell phone Internet thus hampered by a lack of net neutrality, home broadband, with its flat-rate monthly bill, would be the only place to turn for an open Internet. The problem is that a home broadband connection is precisely what many in marginalized communities lack. According to Pew, 15 percent of black adults and 22 percent of Hispanic adults have smartphones but no home broadband Internet—compared to just 6 percent of white ones.

As a result, the universe of information and communities that many people are able to access or contribute to online would shrink. It would ensure, says Renderos, that “mobile Internet is purely a mechanism for consumption versus the creative platform the Internet represents to wired—cable, DSL, fiber—users.”

Informational freedom advocates say the decline of net neutrality—and AT&T’s policy in particular—could, in effect, create yet another sector of American society where information and access to platforms of influence are boutique commodities. The Internet would no longer be a place where a small voice has access to the same virtual megaphone as that of a large corporation or the government.

“It certainly is the ushering in of a ‘have and have-nots’ Internet,” says Renderos.

This process of creating a two-tier Internet will deepen the divisions of economic and racial inequality that drive American politics today. For all the talk of the Internet as an engine of democracy and growth, without a robust net neutrality principle, it will become nothing more than yet another pillar supporting a rigged economic game.

Jay Cassano is a technology reporter for Fast Company and previously worked as a foreign correspondent in Turkey for Inter Press Service. He has been published in The Nation, Al Jazeera, and elsewhere.

Michael Brooks is the host of INTERSECTION podcast on Aslan Media and a contributor and producer for the Majority Report. His writing has appeared in the Washington Post and Al Jazeera.