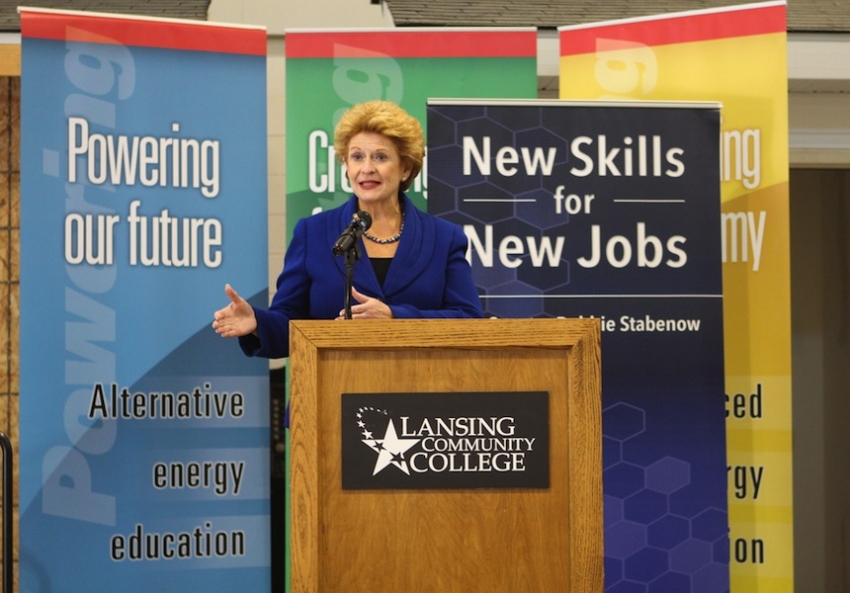 Senator Debbie Stabenow (D-Mich.) announces her New Skills for New Jobs Act, an initiative that aims to align college education with skills employers are seeking. But a new report suggests that this labor-oriented model may not be adequate to help students overcome socioeconomic disadvantages. (Senator Stabenow/Flickr/Creative Commons)

Institutions have to fix their socioeconomic divisions before they can truly help students in need.

In late February, President Obama announced a high-profile “public-private partnership” with charity foundations to target social programs toward young men of color—a demographic that has for years been both vilified and pathologized by negative statistics of unemployment and low achievement. Meanwhile, Obama's administration has promoted community college as an essential link in the higher education system for poor and disadvantaged students to enter solid middle-class jobs.

Yet one new study suggests that despite all his rhetoric about “lifting up” disadvantaged youth, Obama’s approach—a focus on college solely as a conduit to the labor market—reveals the incapacity of the current political establishment to tackle the pernicious institutional racism in the education system.

The study, authored by the Center for Community College Student Engagement at the University of Texas at Austin (CCCSE), examines the barriers many young men of color face at a crucial stage in their lives: when they are attending community college. Though community college is often seen—by Obama as well as others—as an economically accessible pathway out of poverty and into four-year college and a stable career, the report finds that it is at least as fraught with deep socioeconomic and racial divisions as institutions that offer more advanced degrees. And without confronting those divisions, researchers say, it will be hard for community colleges to function as a real turning point for students in need.

Drawing from various empirical studies as well as a survey of more than 700 community colleges in 48 states—along with some areas of Canada, Bermuda, Micronesia, and the Northern Marianas—CCCSE's analysis offers a diverse profile of students and institutions. And it shows that statistically, young men of color are the least likely of all demographic groups to complete their degree.

Relative to white students, a greater proportion of black and Latino students start their higher education in community college. According to surveys, men in those groups report higher levels of engagement in their education than their white peers, based on measures like the use of academic help resources and reported grade-point averages. However, after three years, just five percent of them complete their community college degree or certificate, compared to about a third of their white counterparts.

The trend extends to all levels of higher education: The report notes that “regardless of SAT and ACT scores, white students earn certificates as well as associate, bachelor’s, and graduate degrees at higher rates than equally qualified African Americans and Hispanics” and that even among low-income students, whites are nearly twice as likely to get a bachelor’s degree than their black and Latino peers. Overall, nearly seven in ten black men who enter college don’t finish within six years.

Rather than presenting such statistics without context—and potentially perpetuating a frequently invoked stereotype of young Black and Latino men being mired in a “culture” of underachievement—the CCCSE report also delves into the subtler contours of the effect of racial inequality on students’ long-term education prospects.

CCCSE director Kay McClenney tells In These Times that the young male students of color they studied “typically come from lower income neighborhoods, often come from schools that are not staffed with the best of our teachers … where there may be low to no expectations for their academic performance and so on. And so even though when they reach the community college, may run faster and engage more intensively, they are starting so far behind the starting line, that they're not catching up.” The study focused specifically on young men, she says, because they appear to face unique struggles at the college level.

Given the social baggage poor students of color have acquired by the time they enroll, their first year in community college—one place where they can get on track to a professional job or a university degree—is a possible point of intervention.

Yet the current higher education infrastructure is woefully inadequate when it comes to stopping the downward slide. In fact, community colleges themselves often perpetuate the cycle of institutionalized racism. When encountering people from groups that the public associates with negative stereotypes, the report states, an authority figure like a professor might instinctively lower their expectations. The report notes that in classroom settings, where faculty are disproportionately white compared to the student population, this can even occur “when there are no negative intentions or active prejudice.”

In turn, researchers have found that a student will often internalize these negative expectations, which then become a real impediment to achievement and drag down their accomplishments (at least according to standardized test scores). In focus group discussions, young men talked about negative societal expectations seeping into their identity as children. According to McClenney, boys recalled that starting in high school or even earlier, they were “given messages, explicit and implicit, that they're not going to make it, that the statistics are against them.” Some also reported that they received these subtle negative messages more than girls did.

Such generations’ worth of negative stereotypes make it hard for students to concentrate on their first day in a biology lecture or English composition class. Many students of color come from immigrant families or are the first in their families to go to college, and the cultural schism they encounter on campus—perhaps the first time they've been asked to, say, write a critical essay or discuss chemistry with middle-class suburban students—can be overwhelming. And community college campuses typically do little to combat the effect.

The CCCSE analysis suggests that community colleges can orient their developmental education programs to be both realistic and supportive of the students who are at risk of falling behind. But developing a constructive intervention program on a wide-ranging basis is a tricky challenge, especially when community colleges tend to be relatively autonomous, with highly varying curriculum and assessment standards for students within the same regional system. Moreover, remedial and developmental education programs for students deemed “underprepared” have had very mixed success in closing these persistent academic gaps.

The report cites some programs that have made strides with targeted programming for young men of color. For example, an initiative at Florida’s Valencia College immersed students from the start with counseling and other academic guidance, and linked their supplementary courses to the regular college-level classes instead of just siphoning students off into remedial coursework. In the end, the entire academic community benefited: “graduation rates increased for all male racial/ethnic groups, while the gaps separating groups were narrowed substantially.”

Culture also matters, but perhaps not in the way mainstream education reformers often think. Boosters for charter schools and standardized tests often talk, after all, about promoting a “culture of achievement” in schools and drilling students to become competitive high-achievers, with relatively little attention paid to addressing structural inequalities outside the classroom walls. Lately, reformers, including many mainstream Democrats, have also pushed the idea of making higher education more “efficient” by “aligning college with the job market.”

For struggling students in community college, though, the CCCSE found that effective interventions for young men of color often involved expanding campus life to include their neighborhoods, families and cultural identities. A program at Lansing Community College in Michigan, Latinos Unidos Con Energia Respeto y Orgullo (LUCERO), blends academic supports like career counseling and mentoring with  social programming that promotes a sense of shared experience on and off campus. This group dynamic helps students stay engaged in their academic work and envision themselves as part of a wider community. Other successful programs have intentionally incorporated students of color into the governance structure of the college so they are more invested in the school environment.

These types of socially conscious interventions could spur changes in institutional culture as well. McKenney says community college faculty and administrators need to recognize their complicity in a highly stratified social structure and foster open discussions on race and inequality on campus:

Our system, not just post-secondary education, but K-12, and criminal justice and child protective service and the like still produce disproportionate outcomes for people of color, and particularly for men of color. And to think that collegiate institutions are immune from those forces is an exercise in fantasy. And so colleges really have to come to term with how their students and particularly these men of color, have been affected by those systems and may continue to be affected by [them].

At the same time, just focusing on positive student development in community college won't change overarching societal inequalities. And the CCCSE, which is supported in part by mainstream foundations, does not broach broader structural imbalances in its report. This leaves open the question of how to fund the resources that disadvantaged students need. In fact, the deep underinvestment in state higher education budgets, particularly overcrowded community colleges, has been a major reason why community colleges have lacked the resources to provide even basic services and coursework, much less innovative interventions to address underlying economic disparities.

Despite the limited scope of Obama's initiatives to boost disadvantaged youth of color—which focus on philanthropic initiatives and not concrete federal policy changes or reprioritizing state investments in education—the focus on community colleges in the public-policy sphere has at least turned people’s attention to reimagining the institution's purpose. But beyond projects to boost test scores and graduation rates, what about justice? If the community college campus is where struggling young people are gravitating to empower themselves, how can the colleges equip them to not just overcome, but to level once and for all, the social barriers that have held them back?

As one student quoted in the report put it, “We need to figure out why people keep falling in the river. You don’t just keep jumping in and saving that one individual. You run upstream, and you figure out why they are falling in.”