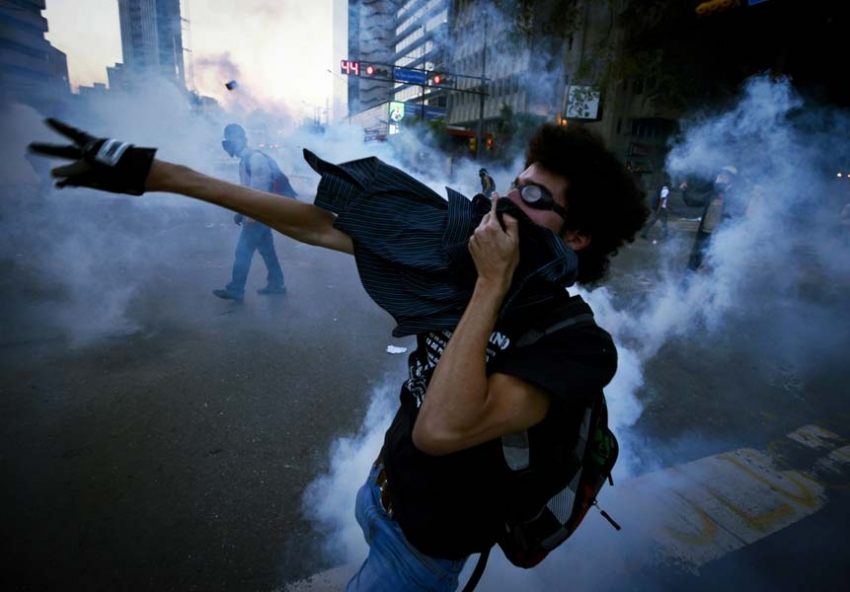 Ending the Pain in Venezuela

A call for civility between Venezuela’s warring factions.

Beginning in mid-February, the country was wracked by confrontations between the Chavista government and the opposition. Young people overturned cars, barricaded streets and destroyed public property in frustration. President Nicolás Maduro responded by sending in troops, who teargassed and beat demonstrators. More than a dozen people were eventually killed. Scores were arrested.

No resolution is in sight, and that’s because of one simple, inescapable fact: Neither side has a popular mandate.

If you support the Chavista government, you can’t be too happy about how things are going electorally. For 14 years, the late Hugo Chávez won presidential election after election by wide margins. But his appointed heir, Maduro, didn’t hit 51 percent in last year’s election—a numerical illustration of the terrible split in the country. And while Maduro’s allies beat the opposition in total votes in December’s municipal elections, they won only 49 percent of the vote.

However, if you support the opposition, you can’t be pleased about those last elections, either. After building up the municipal contests as a referendum on Maduro, the opposition merely held on to its urban bastions of support, while the government kept its rural voters—and in the end, anti-government candidates only managed 43 percent.

And even if you support Maduro’s administration, you’re probably a little nervous about the economy. Oil revenues—95 percent of Venezuela’s exports—have dropped from $77 billion in 2012 to $58 billion last year. That’s a steep slide, especially considering Venezuela has Chinese loans to pay off, discount deals to Cuba and other allies, and heavy subsidies to keep domestic prices low. Back in November 2013, Maduro got the National Assembly to let him govern by decree for a solid year on economic matters. It’ll be hard to shirk responsibility for the economy come this November when the decree expires.

But then, if you’re with the opposition, whether or not you like Henrique Capriles Radonski (the unity candidate who failed to beat Maduro in 2012), you have to be worried that as his stock diminishes, the two anti-government leaders on the rise—Leopoldo López and María Corina Machado—are tainted. López, the charismatic right-of-center poster boy who led the February demonstrations before being arrested on a host of rather flamboyant charges, participated in the 2002 coup attempt against Chávez, and Machado’s NGO has openly taken money from the U.S. Congress-funded National Endowment for Democracy, known for its undemocratic influence. That’s straight-up distressing.

Even for government supporters, however, it must be agony to see the Bolivarian National Guard attacking the Venezuelan people. It doesn’t matter what they believe, how many streets they’ve blocked or how many vehicles they’ve overturned— they’re Venezuelans. And you have to know in your heart that every single demonstrator can’t be a CIA puppet; there are real, honest-to-God problems in Venezuela (inflation, a currency that’s increasingly devalued, a high murder rate, lawlessness, a lack of basic goods).

But if you support the opposition, surely you’ve realized Maduro would rather die than resign. Calling for #LaSalida—Maduro’s ouster—without an actual plan like a referendum and without an understanding that even if by some miracle Maduro goes, he will be followed by a Maduro ally, is no plan at all.

At some point, a conversation has to happen—with mutual respect (a halt to the insults, to the sarcasm, to the provocations) and a willingness to listen (a halt to the violence, to the censorship, to the all-or-nothing mentality that’s plaguing all sides now).