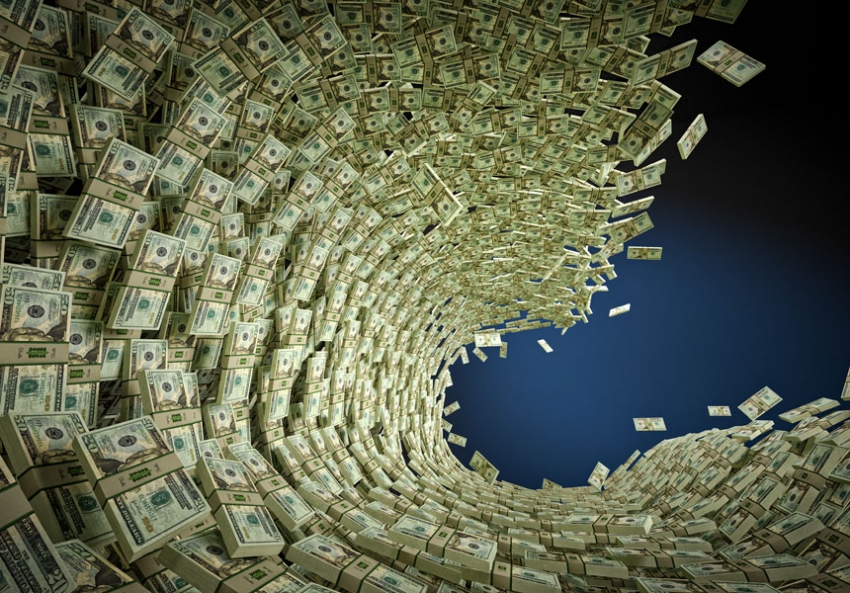 A flood of cash is filling the coffers of Corporate America and nobody else. (Photo by lightboxx/ Shutterstock)

In an age of disparity, corporate wealth is far from an indicator of economic health.

When I read in a financial newsletter that giant corporations are 'sitting on' $1,265,836,000,000, I don’t feel like breaking out the champagne. I see it as a funeral pyre for the American Middle Class.

I read a number of finance-industry newsletters. I want to share with you a recent excerpt from one of them. Here it is:

This is the amount of cash that S&P 500 companies (excluding banks and other financial institutions) are currently sitting on. As of the beginning of the third quarter, the largest U.S. companies collectively held $1.27 trillion. That’s about 13.5 percent more than this time last year. …

Where is this cash coming from? Well, borrowing accounts for some of it. But mostly, it’s that companies are simply generating cash faster than they are spending it.

Companies sitting on cash—the financial newsletter thinks that this is great news! Spectacular news! How nice—for them.

In fact, the corporate income tax has been performing a magical disappearing act for decades. In 1952, corporate income tax revenues totaled 6 percent of GDP. The average during our enormous post-war economic expansion, between 1945 and 1970, was more than 4 percent of GDP. Since then, in every year, it has been less than 3 percent. In 1983, Reagan’s tax breaks knocked corporate income tax revenue as a percentage of GDP all the way down to 1 percent. It returned to that pitifully low level in the first year of the Obama administration, and it has remained below 2 percent. No wonder the corporate cash pile keeps growing and growing and growing.

But what about the non-corporate entities in America? How are those bags of flesh and bones known as “human beings” faring?

Well, 11 million of us are unemployed and more than 7 million of us have part- time jobs, but can’t find full-time work. And in the past 10 years, the U.S. labor force participation rate has shrunk by 3 percent. Among those who are fortunate enough to find work, the average pay is a whopping $24 an hour. According to a University of Michigan report, around 1 in 5 households in America has a negative net worth—they owe more than they own. In addition 48 million Americans have no health coverage, and 48 million rely on food stamps to stave off hunger.

Don’t expect the next generation of red, white and blue meat-bags to do much better. One fifth of all American children live in households trying to survive on less than $2,000 a month. Many of these children go to bed hungry; is it any wonder that our schools are producing students whose math scores, by one measure, are among the worst in the world?

A Tale of Two Cities , the novel by Charles Dickens, begins with the famous words, “It was the best of times, it was the worst of times.” In America today, it is the best of times for multinational corporations and their CEOs. But for ordinary people, it’s pretty bad, and getting worse.

For non-corporeal entities, times are good. For flesh and bone, bad.

I submit to you that there is a connection between those two things, a connection generally known as “cause and effect.” There are several such connections, in fact.

First, inequality causes poverty through simple arithmetic. If the richest 1% is taking half of everything, then that just doesn’t leave very much for the other 99%. And inequality in America is not only the highest in our history, but also the highest in any industrialized country. According to the CIA World Factbook, our Gini coefficient— a statistical measure of income inequality—places us between Venezuela and Uruguay, with far more inequality than every major European or East Asian nation. Our inequality is surpassed largely by a bunch of African countries.

Second, inequality causes poverty through economic mismanagement. As that finance newsletter proudly states, huge corporations don’t spend their money; they just sock it away. And the same thing is true of rich people, and banks, and multi-national corporations. The 400 individuals on the Forbes 400 list alone have accumulated more than $2 trillion in wealth, the great majority of which remains in their pockets year after year. We are ending up with enormous pools of cash that have been drained from the real economy, and are not reinvested in it. We have a national economy with a maximum possible economic output of $16 trillion each year, but much of it ends up in deep pockets with no holes, just sitting there. This creates a massive and chronic shortage in “aggregate demand,” a problem that John Maynard Keynes accurately described 75 years ago. If we allow demand to fall short, then unemployment explodes. Hence we paper over the evaporation of all that money from aggregate demand with federal deficits, “quantitative easing” and enormous personal debt.

But it doesn’t matter, because the existence of all those people without jobs—what Marx called a “reserve army of the unemployed”—still fuels poverty by decimating wages. Desperate people bid down the price of labor simply to survive. Average wages, adjusted for inflation, haven’t increased since the 1970s. America is becoming a nation of cheap labor. And the notion that in such circumstances, burgeoning business profits somehow will magically increase wages and create jobs is delusional. They haven’t, and they won’t.

The misconception that the so-called job creators will deploy corporate profits to take risks, to reinvest, to expand and, ultimately, to employ more people is a right-wing pipe dream. They might be doing that in China; they sure aren’t doing that in America. Businesses see labor simply as a cost. Business tries to reduce that cost as much as possible, in order to boost profits as much as possible. Business is not in the business of creating jobs. Business is in the business of maximizing profit. Business hires labor only when it can make a profit from that labor. If any business could eliminate its labor force entirely, it would. And many actually do just that, through subcontracting, outsourcing, offshoring and other measures that reduce compensation or eradicate the labor force.

So please forgive me if, when I read in a financial newsletter that giant corporations are “sitting on” $1,265,836,000,000 “in cash,” I don’t feel like breaking out the champagne. I see it as a funeral pyre for the American Middle Class.

Those are the facts. The Sturm und Drang that you see on the evening news is a desperate effort to avoid those facts. And the deep, deep question in our political system today is this: Are we going to do anything about it?

U.S. Rep. Alan Grayson is a progressive Democrat from Orlando. He currently serves on the House Foreign Affairs Committee and the Science, Space and Technology Committee. He previously served as a member of the House Committee on Financial Services.