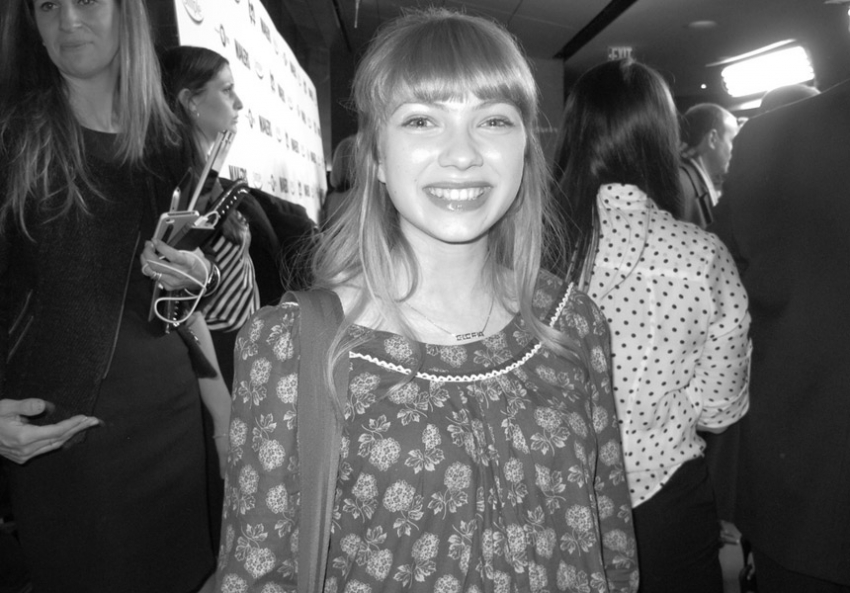 Rookie Magazine, founded in September 2011 by Tavi Gevinson (pictured here), is just one of many online resources young women can use to support each other and improve their lives. (Jauretsi / Flickr / Creative Commons)

Teenage girls on the Internet aren’t nearly as fragile as we think they are.

If social media leaves young women vulnerable to sexist harassment from strangers like never before, it also offers them a chance to connect with unprecedented ranks of allies and to execute measurable change by making their numbers visible.

Every few months or so, I take a moment to pause and reflect on one of the few things in my life that causes me profound and unshakable gratitude. Thank God, or whatever benevolent force there may be in this universe, I think to myself, that Twitter did not exist when I was in high school.

Of course, this introspection isn’t without cause. Every few months, there seems to arise a new chunk of evidence—or at least a new wave of think pieces—about how the Internet is ruining the lives of young women. The latest comes from Katy Waldman at Slate’s XX Factor blog, in a March 14 post partially titled “Social Media Makes Girls Hate Themselves.” In one new study, Waldman explains, plastic surgeons report an uptick in teenage female clients seeking surgery because they don’t like their appearance in online photos. In another, 960 college-aged women were surveyed for disordered eating patterns, then split into groups assigned to either look at Facebook or research ocelots. The social-media-skimmers’ incidences of destructive thinking around food increased. The ocelots, thankfully, were harmless.

In addition to the data Waldman presents in her piece, the media has produced plenty of other evidence to back up her assertion that social media is making young women more vulnerable to self-loathing. Similar studies and articles have been making waves for years, including one 2011 study that claimed the more time teenage women spent on Facebook, the more prone they were to developing a negative body image. That study inspired a CNN essay, in which a college peer counselor noted that whenever she spoke to a sobbing young woman, “Facebook was being mentioned in some way in just about every conversation.” In turn, this spawned a roundup of teen reflections on the web community Proud2BeMe, which included statements as terminally depressing as “people get positive attention in the world by losing weight,” or, simply, “the less clothes you have on, the more popular you are.”

And comparing your body to those of your social-media contacts is just the beginning of the damage. It doesn’t even take into account the acute trauma inflicted by witnessing—or, God forbid, being at the center of—the online firestorms of intense personal criticism and harassment that seem to be disproportionately targeted at young women. Consider the fate of 11-year-old Jessi Slaughter: When she posted a series of ill-advised YouTube videos in which she cursed and talked about “popping a Glock,” users on various seedy sites retaliated by publishing her address and phone number in addition to posting a “guide” for the best way to torment her. (One helpful tip: “Tell her to kill herself.”) Soon enough, Jessi's YouTube videos were less “profane bravado,” more “footage of a young girl crying her eyes out.” Teenage MySpace celebrity Kiki Kannibal had her home vandalized, and was physically sexually assaulted by “fans.” Multiple young women, including 17-year-old Rehtaeh Parsons and 12-year-old Rebecca Sedwick, have actually committed suicide following online bullying campaigns. Being a teenage girl was terrifying enough when you could only be persecuted by your classmates; God only knows what kind of paranoia and self-doubt we’re fostering in our young women by raising them in an environment where taking an unflattering photo or making a bad joke can result in international opprobrium and a flood of credible threats to their lives.

But the “social media is ruining girls’ lives” argument seems to lack a crucial degree of nuance. For one thing, social media’s deleterious effects are not confined to young women, or even to women, period. In a recent survey of 298 users, presumably including multiple genders, fully 50 percent said that social media made their lives and self-esteem worse, particularly “when they [compared] their own accomplishments to those of their online friends.” For that matter, 25 percent said they’d faced “work or relationship difficulties due to online confrontations.” Having a social media presence is roughly analogous to competing in a beauty pageant whilst dodging heavy gunfire: Everyone suffers from the pressure to create hyper-idealized portraits of themselves within a notoriously hostile and conflict-prone environment.

Yet rather than worrying about how Facebook is warping the fragile psyches of 45-year-old male finance professionals (poor little fellas), we focus on the young women. There seems to be more data and discussion about young women's vulnerability to online psychological damage than there is about any other group. We currently exist in a media environment, after all, wherein opining on young women’s selfies—bold expression of self-confidence, or lesson on valuing looks over accomplishment?—can turn into a massive public debate.

This does make a certain amount of sense: Young women are historically condescended to, fetishized, and vulnerable to gendered violence or predation. If social media is unhealthy, its unhealthiness will probably impact them more profoundly, simply because they face less support and more hostility from the offline world, too. But our concern about young women and social media seems to unilaterally hinge on an idea of these adolescents as particularly fragile and unable to fend for themselves—which, though it may be motivated by protectiveness and concern, is also an inheritance from a sexist culture. And it's an assumption, for that matter, that their actual Internet usage doesn’t seem to back up.

When we fret about young women being exposed to the Internet and its alien newfangled ways, we’re forgetting that for anyone younger than about 25, the Internet has basically always been around. In the face of social media's gradual erosion of everyone's self-esteem, young women may be more qualified to form survival strategies than anyone else, simply because they’re not adapting a pre-Facebook conception of the world to a post-Facebook experience. Media commentators are usually men older than 30. By contrast, the users they’re wringing their hands over are mostly female and mostly young. The Internet isn’t a strange new country for these girls; it’s their home turf. It’s the rest of us who are in the minority.

Thanks to this fluency, young women have also proven to be remarkably creative in terms of finding ways to use the Internet to support each other and improve their lives. The microblogging site Tumblr, for example, is a haven for them: Its users are 51% female, with some sources reporting that half its traffic comes from people younger than 25. It’s also a hotbed for intense, diverse, literate feminist critique. It’s the platform that made a massive crossover hit out of theory-intensive in-jokes like Pizza Feminism and Feminist Ryan Gosling; it’s also where a then-unknown 23-year-old woman launched Binders Full of Women within minutes of Romney’s sexist debate gaffe, getting so much traffic that she was accused of working for Barack Obama’s presidential campaign.

If social media leaves young women vulnerable to sexist harassment from strangers like never before, it also offers them a chance to connect with an unprecedented range of potential allies and to execute measurable change by making their numbers visible. Take Julia Bluhm, a teenager who launched a Change.org petition requesting that Seventeen magazine stop retouching its models, who then gathered more than 84,000 signatures and received a concession from the magazine itself. They also have access to pro-girl resources—such as Rookie Magazine, run and largely staffed by young women, or Scarleteen, a sex-positive site about sex and relationships—that those of us in an older demographic could never have dreamed of.

So, yes: I am frequently grateful that social media did not exist when I was in high school. It is true that our conception of youth as a protected space—a time to screw up, to try things on, to not quite know what you’re doing, to make bad fashion statements and worse life choices that you’ll find intensely embarrassing a few years down the line—is evaporating as everyone’s life becomes a public spectacle. I worry about what will happen to young women’s freedom to make mistakes and grow up as their awkward years are archived online, displayed to the often merciless eye of the viewing public. But I’m just doing what grown-ups are known to do: Being overly nostalgic and identifying “youth” with a version of reality that no longer exists. It has always been frightening and dangerous to be a young woman in a misogynist culture. And young women have always created means by which to survive. If they have new threats to cope with, in our digital age, they also have a whole new set of tools.