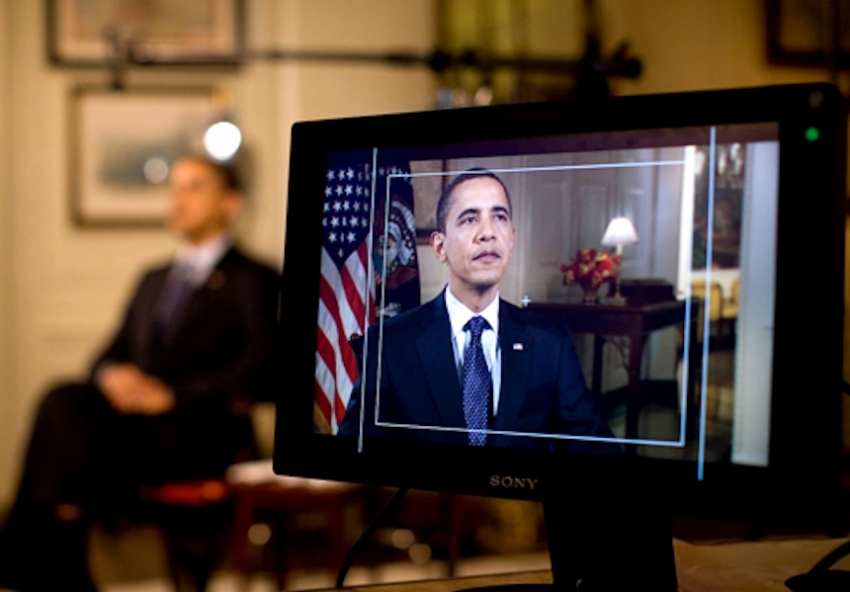 President Obama has repeatedly proposed to sell off one of the crowning achievements of the New Deal. (Photo by Pete Souza, official White House photographer/Wikimedia Commons.)

Obama endorses higher minimum wages and offers rhetorical support of unions and collective bargaining, which cost not a penny of federal funds, but balks at a well-financed public works project that employs workers at good wages but might affect the federal budget.

President Obama’s 2015 budget request last month revived his abortive 2014 budget proposal to privatize the Tennessee Valley Authority (TVA). What are we to make of a Democratic president repeatedly proposing to sell off the publicly financed and administered redevelopment program, widely seen as one of the great successes of the New Deal? This move tells us much about Obama.

But to understand what’s at stake, a look back at the TVA’s history is in order. Created in 1933 as a project to revitalize one of the nation’s most poverty-ridden and least developed economic regions, TVA worked economic and social magic. Sections of seven southern states drained by the Tennessee River and its tributaries—Alabama, Georgia, Kentucky, Mississippi, North Carolina, Tennessee and Virginia—obtained essential infrastructure for the first time, including cheap electricity, clean water, sewer systems, paved roads and flush toilets in place of rudimentary outhouses. TVA enabled the region’s residents to heat and illuminate their homes better, to enjoy clean water at the turn of a tap, to farm their land more securely and efficiently, and, in many cases, to find decent jobs in the industries attracted by the region’s low-cost electrical power and improved means of transport. TVA proved a great triumph of Franklin D. Roosevelt’s New Deal, one of the few programs enacted during the “hundred days” that stood the test of time. Few New Deal initiatives did as much to improve the lives of the one-third of the nation that FDR famously described as “ill-housed, ill-clad, and ill-nourished.” So successful was the TVA in developing the region’s economy that the Republican politicians who now dominate the region—and who usually dismiss government initiatives as “creeping socialism” or wasteful expenditures of public funds—have been among the sharpest critics of Obama’s overtures to privatize the TVA.

The TVA’s successes became so admired that successive presidents and numerous legislators suggested similar federal agencies to develop the Missouri and Columbia River valleys. President Lyndon B. Johnson even proposed a Mekong River Authority to unite the peoples of Southeast Asia in a common and peaceful endeavor. No political figure or officeholder in the region served by the TVA dared to suggest its privatization.

Not that the TVA was without faults. The dams it built to tame the region’s rivers and generate power displaced thousands of families from land and homes that had been theirs for generations. TVA had promised to create a participatory democracy of, by, and for the people of the region. Instead, it evolved into a governmental agency operated by professional managers and trained engineers who designed programs for the region’s inhabitants without their input. Whatever its faults, however, TVA served a population that private enterprise neglected, demonstrated that government could provide electricity more cheaply than private utilities and just as efficiently, that public authorities had the ability to control wild, flood-prone rivers, and, perhaps most importantly, that a government agency could lift the curse of poverty from millions of people.

Today most references to TVA link it to FDR and the New Deal. Yes, TVA was enacted as part of the first wave of New Deal reforms. What became TVA, however, was the pet project not of Roosevelt and a Democratic congressional majority but of a Republican senator from Nebraska. Sen. George Norris had been fighting for it since the end of World War I, when a Republican president and Republican congress decided to rid the federal government of the munitions-making facilities it had developed at Muscle Shoals, Ala. Norris and his fellow Republican insurgents and their Democratic allies saw the munitions factory as a model of how the government could invest in the region, and fought persistently during the 1920s to use federal power to serve the needs of the inhabitants of the Tennessee Valley. Hard as it may be to believe today, Norris and his band of Republican mavericks were “Tea Partiers” of a different variety, a faction of the Grand Old Party that believed in the use of federal power and the public purse to improve the lives of ordinary citizens, uplift the least among us, and serve the 99% not the 1%. FDR and a Democratic congressional majority brought Norris’s dream to fruition.

Over time, however, the administrators of TVA drifted from the agency’s original mission of creating a democratically administered public agency. They still provided cheap electrical power to the region and kept the river in check, but they also began to serve regional business interests more assiduously than ordinary citizens, to rely on coal as well as water to generate power, to wreak environmental damage—spewing carbon into the atmosphere and fouling rivers with coal ash and other waster products—and to contract with non-union mines for the delivery of cheap coal, hastening the decline of the United Mine Workers. Such failings likely played a part in Obama’s assumption that TVA might serve its region better were it privatized. The decision was likely influenced by the fact that the TVA, whose mission is not to create profit, spends more than it earns.

A more progressive Democratic president might have proposed instead that TVA remain a public agency but one that reverted to its original mission by involving residents more directly in decision-making. Such a reform might cost money and add to the federal deficit, but it would also restore the utopian vision of TVA’s founders. Obama’s proposals instead convince me that Paul Street’s two books about Obama—Barack Obama and the Future of American Politics, covering his presidential candidacy and The Empire’s New Clothes: Barack Obama in the Real World of Power, on his first-term as president—were prescient. Street (who, full disclosure, is my former student) described Obama as a candidate tied to Chicago’s financial community and in favor of neoliberal economic policies. To Street, these neoliberal tendencies were borne out in President Obama’s early reliance on the advice of such people as Timothy Geithner and other acolytes of Goldman Sachs to forge his administration’s early economic policies.

Obama’s six years in the White House also remind me of Jimmy Carter’s presidency. Like Carter, Obama proves quite willing to provide cost-free (in a budgetary sense) carrots to vital Democratic constituencies on such issues as gay rights and women’s equality. He endorses higher minimum wages and offers rhetorical support of unions and collective bargaining, which cost not a penny of federal funds, but balks at a well-financed public works project that employs workers at good wages but might affect the federal budget. He used his political capital to create a costly new health program for citizens, yet often defended it in terms of the Affordable Care Act’s positive impact on the federal budget. Month after month, year after year, as the labor market remains slack and long-term unemployment worsens, Obama insists that cutting the federal deficit remains more vital than putting people back to work. His proposal that TVA be privatized fits well into a neoliberal framework and satisfies Democratic Party circles in the financial world. As the nation’s first black president, Obama may represent a greater triumph for the dormant Democratic Leadership Council—which moved the party from New Deal politics to neoliberalism—than its original standard bearer, Bill Clinton, the first figurative black chief executive.