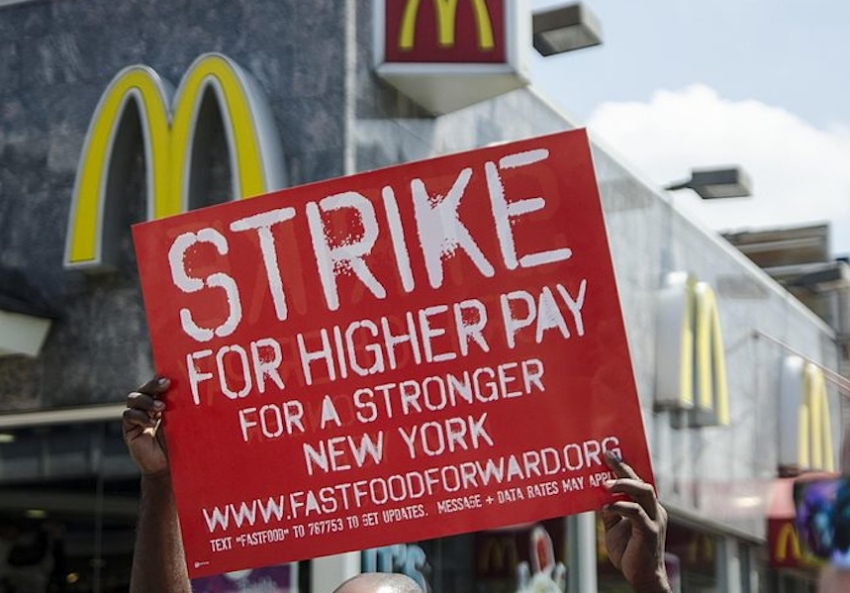 It comes down to a deep disrespect for the workers who make the country run.

Republicans are on the wrong side on this. Seventy-one percent of Americans would vote to raise the federal minimum wage to $9 an hour if given the chance. And it’s happening. As Republicans in the House block President Obama’s proposal to increase the minimum to $10.10 an hour, states and cities are doing it themselves.

Republicans in America suffer a crippling anxiety. It’s the terrible fear of corporations paying poor workers too much.

The GOP is so afraid that the nation’s lowest wage earners will get a raise that Republican politicians across the country are working overtime to outlaw wages above $7.25 an hour for these workers.

They’re passing legislation forbidding towns and counties from raising the minimum wage in their jurisdictions. Republicans insist: no pay bump for those raking in $15,080 a year! On the other side, however, there’s no amount of pay, perks, private jets, premium health plans and golden parachutes that Republican politicians believe could possibly be too much for a CEO.

That Oracle CEO Larry Ellison took home $78,440,657 last year is completely reasonable in the minds of Republicans. That it would take a minimum wage earner 5,201 years to earn what Larry took out of his company for one 365-day period is, according to Republican-think, a morally correct calculation.

That is why Republicans are working so hard to prevent Walmart and McDonald’s workers from earning more money while, at the same time, doing nothing but congratulating Time Warner Cable CEO Rob Marcus for grabbing $79.9 million for six weeks of work.

Republican Mary Fallin, governor of Oklahoma, is among them. She signed a law last week forbidding towns in her state from increasing the minimum wage. Fallin, whose state lays claim to the third highest proportion of minimum wage earners in the country, a percentage that rose from 2011 to 2012, justified denying these workers a few extra pennies an hour by saying that would raise prices.

She and her GOP cohorts haven’t fussed at all, however, about the cable bill increases likely to result from Marcus’ proposed merger of Time Warner Cable and Comcast, the corporate marriage which would result in that $79.9 million dowry payment to him.

Republican state lawmaker Chris Kapenga of Wisconsin responded like Fallin to a proposal by the Milwaukee County Board to raise the minimum wage for county workers and contractors. Kapenga’s legislation would prohibit local governments from doing that—even though two other Wisconsin counties already had. Kapenga’s proposal, which would slice the paychecks of hundreds of Wisconsin workers, has not passed. The Democratic-sponsored proposal to raise the rate in Milwaukee to $11.32, the amount necessary for a full-time worker to stave off poverty for a family of four, did pass.

Republicans are on the wrong side on this. Seventy-one percent of Americans would vote to raise the federal minimum wage to $9 an hour if given the chance, Gallup found last year. And it’s happening. As Republicans in the House block President Obama’s proposal to increase the minimum to $10.10 an hour, states and cities are doing it themselves.

A dozen states and four cities increased their minimum wage rates beginning Jan. 1. Since then, five states and the District of Columbia approved raises. When all of these take effect, half of the states will mandate wages higher than the federal minimum. And, in November, eight more states are expected to offer voters referendums on raising their rates.

Still, Republicans inveigh against advances for the poorest. They say increasing the minimum wage would hurt businesses. They don’t care how much an unreasonably low minimum wage hurts workers. And at the same time, they believe James A. Skinner is worth every penny of the $28 million McDonald’s paid him in 2012.

They don’t believe that there are a dozen Wharton School MBAs who could take his place tomorrow and, frankly, sell hamburgers just as well for say, $280,000 rather than $28 million. They don’t see how his excessive pay might affect dividends to shareholders or the cost of fries. They’re blind to the fact that the majority of McDonald’s fans are willing to pay a few more cents for a Happy Meal if it means a higher wage for the struggling young mother serving the fast food.

Republicans don’t believe in paying a living wage to workers they disrespect, like the home health aides providing loving 24-hour care to the frail grandmas of GOP politicians across this country, like the housekeepers who clean GOP presidential hopefuls’ hotel rooms as they campaign across the nation, like the McDonald’s workers denied paid sick days who make extraordinary efforts not to cough on the fries that super-sized Republicans stuff in their faces.

The GOP believes CEOs deserve to pocket in one year what it would take the average worker 331 years of labor to earn—a ratio calculated by the AFL-CIO Executive Paywatch team this year. CEOs are just so important, so special, so irreplaceable, according to the GOP.

They’re so much better than the heart surgeon who spends all day every day meticulously saving people’s lives. They’re 331 times as important as the firemen who rush into a burning home to save a woman’s life.  They’re 331 time more valuable than the policemen and paramedics who ran toward the sound of an explosion a year ago in Boston to rescue bomb victims. To Republicans, those CEOs are 331 times more precious than the teacher who nurtures the shy child, encourages the faltering student or refuses to abandon the recalcitrant pupil.

Republicans’ fear of paying too much is terrible. Not because of GOP angst. No, because it causes underpaid workers to suffer. Because it means Republicans are so enthralled with the 1 percent who write supersized campaign checks that they devalue the contributions of everyday workers to the welfare of America.  Because it means Republicans will continue to blockade efforts to resolve the growing income inequality that is rupturing the economy and the social cohesion of this nation.