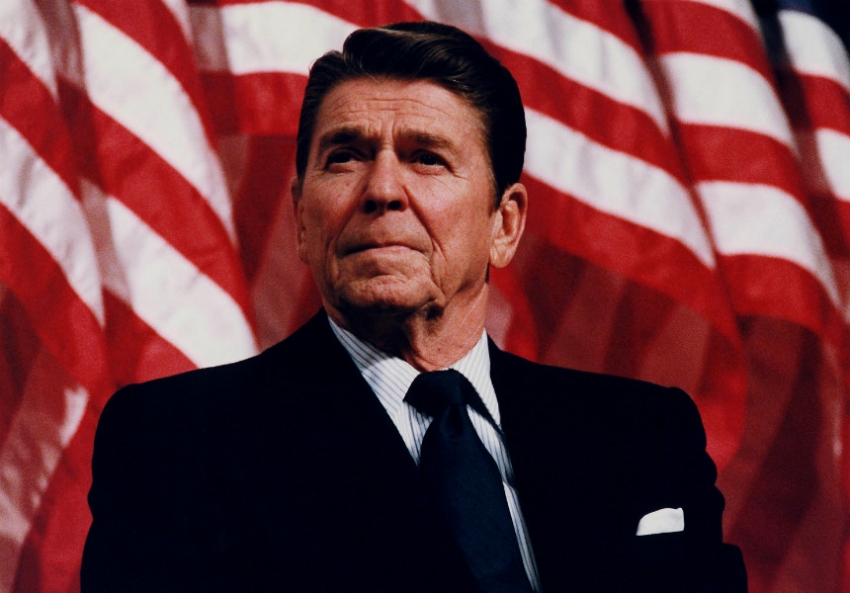 The effectiveness of Reagan’s presidency is no more than a right-wing myth.

Reagan, alongside Bush the younger, was arguably the most destructive of all U.S. presidents, for he bankrupted America both financially and morally.

The path to the Republican Party presidential nomination travels through Ronald Reagan’s ghost. From Iowa to South Carolina, GOP primaries are often reduced to a competition for the number of times a candidate can invoke his name. If Jesus hadn’t died at such a youthful age, Reagan’s image would have been what right-wing Americans imagined when they thought of an elderly Messiah. For a conservative to offer anything less than pious servitude to his memory is to violate the fourth of the Ten Commandments: Thou shall not take the name of the Lord in vain, which is exactly the sin committed by one of the 2016 GOP packleaders, Sen. Rand Paul.

The magazine Mother Jones compiled an array of video clips showing the Kentucky senator casting the spiritual leader of today’s conservative movement as anything but the fiscal disciplinarian right-wing revisionists like to remember him for. In a variety of speeches given between 2008 and 2010, Paul repeatedly stated that Democratic President Jimmy Carter had a better record on fiscal discipline than Reagan. Heresy!

In a speech given to student Republicans at Western Kentucky University, Paul said you can trace the Republican Party’s hypocrisy on spending and deficits back to Reagan:

Some say, well that's fine, but there were good old days. We did at one time … When we had Reagan, we were fiscal conservatives. Well, unfortunately, even that wasn't true. When Reagan was elected in 1980, the first bill they passed was called the Gramm-Latta bill of 1981, and Republicans pegged it as this great step forward. Well, Jimmy Carter's last budget was about $34 or $36 billion in debt. Well, it turns out, Reagan's first budget turned out to be $110 billion dollars in debt. And each successive year, the deficit rose throughout Reagan's two terms.

In another speech, Paul observes that “the deficit exploded because domestic spending rose faster under Reagan, so did military, but domestic spending rose faster under Reagan than under Jimmy Carter.” He goes on to warn Republicans that “we have to admit our failings because we're not going to get new people unless we become believable as a party again.”

This, among other remarks, is a breathtaking pronouncement from the presumed leader of today’s conservative movement. It’s hard to overstate how severe this self-inflicting blow is to both his political ambitions and the legitimacy of movement conservative’s ideology. It’s a blow because Paul’s recollection of the Reagan presidency is consistent with reality.

Republicans are fond of labeling Carter the worst president of the 20th century, but that does not square with facts. Reagan’s approval rate was only 43 percent six months after leaving office. Carter’s approval was above 60 percent. Polls don’t mean everything but they do take a snapshot of a moment in time, and history has a way of remembering presidents fondly long after they’ve left office. In other words, we forget how bad the bad presidents truly were. Reagan, alongside Bush the younger, was arguably the most destructive of all U.S. presidents, for he bankrupted America both financially and morally.

Republicans revere the memory of Reagan. For the Right, he is their Kennedy. In any poll taken of Republican voters, he’s popularly regarded as the greatest U.S. president alongside Lincoln. But the effectiveness of his presidency is a right-wing media-generated myth that remembers his poetry rather than his prose. We remember, “Mr. Gorbachev, tear down this wall,” “The shining city on the hill,” and “Freedom is never more than one generation from extinction.” We forget the economic destruction his policies inflicted on the middle class and the nation’s poor.

Pablo Mayhew, a columnist for Raw Story, wrote, “The Republicans are terribly fond of revisionism, which permits them to commit heinous atrocities while they are in office on the hunch that no one in America will remember what they did a decade later … and still fewer will even care. Tricky Dick benefited from this—and so did Ronald Reagan.”

In 1981, Reagan passed his first budget—a budget that included a $38 billion ($90 billion in today’s dollars) tax cut to the wealthiest Americans. Reagan initially slashed the top income-tax rate from 70 percent to 50 percent. To make way for this massive tax break for the wealthiest few, his budget included spending cuts to programs that benefit the lower-middle-class: Social Security, Medicare, unemployment benefits and infrastructure spending.

But guess what? In 1982, the economy did the exact opposite of what “voodoo economics” had promised to do. The economy slipped into a slight recession, and Reagan was forced to admit that the balanced budget he promised would not happen. Duh!

By the following year, Reagan raised taxes dramatically and other increases followed. In fact, the 1982 tax hike was the largest peacetime tax increase on the middle class in American history. That same year he also raised the gasoline tax. In 1983, Reagan hiked taxes again. Despite his reputation as a tax cutter, Reagan raised taxes three times, and tripled the deficit during his eight years in office. If Reagan were transported to 2016, he’d never survive a Republican primary challenge against Rand Paul, Ted Cruz, or Sarah Palin.

During the Reagan years, the debt ballooned to nearly $3 trillion, roughly three times as much as the first 80 years of the 20th century had done altogether. Unemployment soared after Reagan’s 1981 tax cuts, while income inequality exploded. More significantly, Reagan’s tax increases primarily hit the middle class, while he shielded the wealthy. The main reason he’s remembered as a tax-cutter is because of what he did to tax rates for the super-rich: He slashed the top rate from 70 percent to 28 percent, and income inequality has soared ever since, so that today, the top 1 percent of Americans controls a quarter of the nation’s wealth, as opposed to 8 percent in the year Reagan was inaugurated president.

Haney López, the author of Dog Whistle Politics, said in an interview with Bill Moyers, “Over the 1980s, the Reagan tax cuts transferred a trillion dollars to America’s top one percent. Yes, voters got the tax cuts they thought were aimed at cutting off undeserving minorities, but, in fact, it was a politics that was showering money on the very richest Americans.”

Trashing the War on Poverty, President Reagan set about destroying the social compact that build the postwar American dream. Salon editor-in-chief Joan Walsh writes, “It’s difficult to overstate how much Reagan-era propaganda hurt the country. It distorted our understanding of how to help low-income people, as well as our optimism they could be helped, and it corroded the social contract that had prevailed since the New Deal.”

We now have a possible 2016 Republican nominee to thank for reminding America of the destructive mythology that forms the base of the Republican Party’s economic philosophy, and a reminder that President Carter wasn’t all that bad. Certainly not when compared against Republican presidents of the modern era.

CJ Werleman is the author of "Crucifying America," and "God Hates You. Hate Him Back." Follow him on Twitter: @cjwerleman