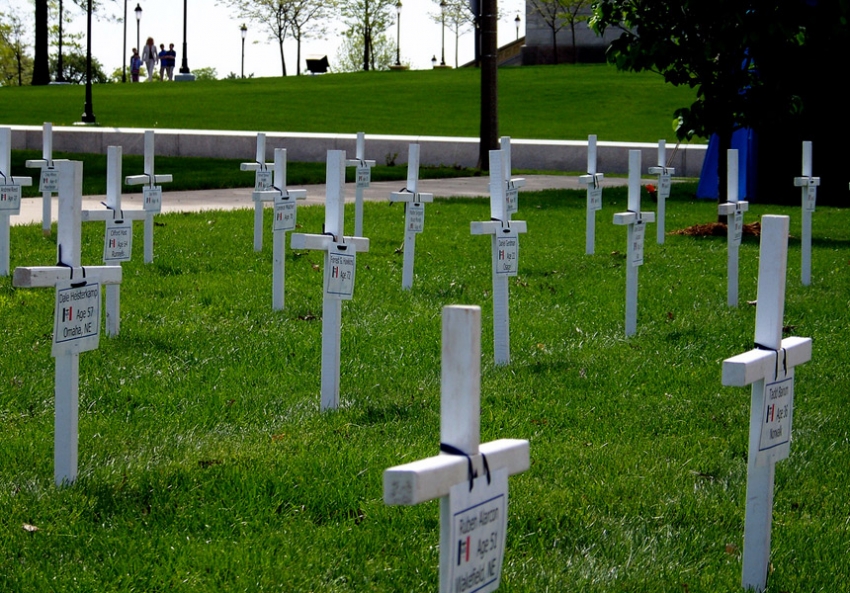 Dying for the Job

When employers put efficiency and profit over safety, it’s their workers who suffer.

On February 12, Edward Lewis Neal told his wife goodbye and drove to the Cooper Tire plant in Texarkana, Ark., where his co-workers called him Preacher because of his ministry at the Springdale Church of God and Christ.

When an ambulance took Preacher from Cooper Tire that day, he left behind most of the flesh of his left hand and, as a result, the ability to clasp his God-given hands in prayer.

The rubber-milling machine that took Preacher’s hand lacked a body bar safety device. Four days later, on February 16 at the Bridgestone-Firestone plant in Des Moines, Iowa, 30-year-old maintenance worker Dan Keeney lost his left arm to an auger that was not covered. Two days after that, on February 18 back at Cooper Tire in Texarkana, a rubber milling machine with a body bar safety device that had been disabled for years crushed both hands of 42-year-old D.E. Morris Charles Hunter.

Those manufacturing workers are maimed. But they survived. Too many do not. On Monday, my union, the United Steelworkers (USW), tolled a bell for each of the 33 Steelworkers killed on the job since last Workers’ Memorial Day 12 months ago, including John Meyer, who was 51 when he was fatally injured in July at the Bridgestone-Firestone tire plant in LaVergne, Tenn.

Before Cooper hired Preacher in 1993, he had tried for a decade to get a job at the tire plant. What he sought was a steady job with good pay and benefits negotiated by the USW. When Preacher finally got in, he pledged to work hard and diligently in exchange for that compensation. He never agreed, however, to forfeit a hand for it.

Sometimes, corporations place production and profit above human safety. As a result, workers lose lives and limbs. Cooper recently announced it will spend $970,000 to improve safety. That’s good. But it comes too late for the two Cooper workers who are now amputees. A corporation that values workers’ lives engages in proactive safety, and thus preserves the hands applauding it.

Preacher realized the machine he operated for the past couple of years at Cooper was dangerous. It is a mill that grinds, heats and remolds rubber. He fed rubber into its two drums rolling against each other, one with a smooth surface, the other grooved.

He knew he had to be vigilant because the rubber mill had grabbed gloves off of his hands. That, he said, was scary.

“It doesn’t take much, even if you are being as careful as you can; it doesn’t take much for you to get caught in the rubber,” Preacher recounted. “Even though you’d be paying attention, sometimes it would just happen. It might catch the glove and pull the glove off. It happened before you knew it. If it catches that glove far enough, it catches you.”

That’s what happened to him on February 12. When he put rubber on the mill and tried to get it to attach, he said, “It caught me before I knew it.”

With his right hand, he pulled an emergency cable, which stopped the machine. By then, though, the mill had splayed his left hand.

There’s a safety device called a body bar that’s designed to prevent a mill operator from getting close enough to the machine to lose a hand. It’s placed in front of the machine so that if the worker leans in too far, his body presses the bar, automatically switching off the mill before it can snatch a hand or arm or life.

Sometimes body bars are annoying because they restrict operator movement and stop mills unnecessarily. There was no body bar at the mill where Preacher worked.

There was one at the rubber mill that crushed the hands of D.E. Morris Charles Hunter six days later. But it had been cut and disengaged years ago. If corporate managers fail to use safety devices because they’re inconvenient, “Then they have no heart, no soul. They are like the machines,” said Mr. Hunter, who continues to suffer pain and nightmares.

The rubber mill caught Mr. Hunter’s right hand, and as he tried to free it with his left, both hands were trapped. He had no way to pull an emergency cord to stop the machine. “I believe my Lord and Savior saved me,” said Mr. Hunter, “I believe He got me out of that machine.”

A functioning body bar might have prevented the tragedy. Instead, Mr. Hunter lost both hands.

Joyce Neal said when she got the call that Preacher had been hurt at the plant, “I was sure my husband was gone.” But, she said, “The Lord kept me calm to drive up there to the hospital.”

She said some in his congregation asked for a reason something so terrible could occur. She recalled her husband telling them: “When the Lord lets me know why it happened, I will let you all know.”

Preacher suffers some phantom pain. And occasionally he forgets the hand’s gone and reaches for something. But he still gets up every morning and sees his wife off to work. And he got a prosthesis last week.

“I would still like to have my hand,” he said, “But I can’t bring it back. With the help of the Lord, I will make the adjustment and move on. There are some things that I used to do that I can’t do anymore, like lace up tennis shoes. I used to be able to get dressed in 15 to 20 minutes. Now it takes me an hour almost.” But, he said, he is looking forward to classes this week on using his prosthesis and hoping to learn an easier way to button than struggling with one hand.

“It could have been worse,” he said. “I am still here.” Though grievously injured, Preacher knows he was luckier than Benjamin Butler, who at 60, just a year older than Preacher, was killed at the Cooper plant in 2007.

Preacher is glad Cooper is spending money to improve safety now. But, he said, if corporations faithfully treated safety as a solemn obligation, they could prevent tragedies. That is what the Steelworkers want: consistent, continuous, preemptive and preventative safety. At all workplaces.

Boone, who began work at Cooper when he was 18 and plans to retire in a year and seven months, hopes to make it out alive and intact. That is the right of every worker, he said, and every corporation bears responsibility to endeavor to ensure it. “I believe,” Boone said, “when a person comes to work with two hands, they should leave with two hands.”