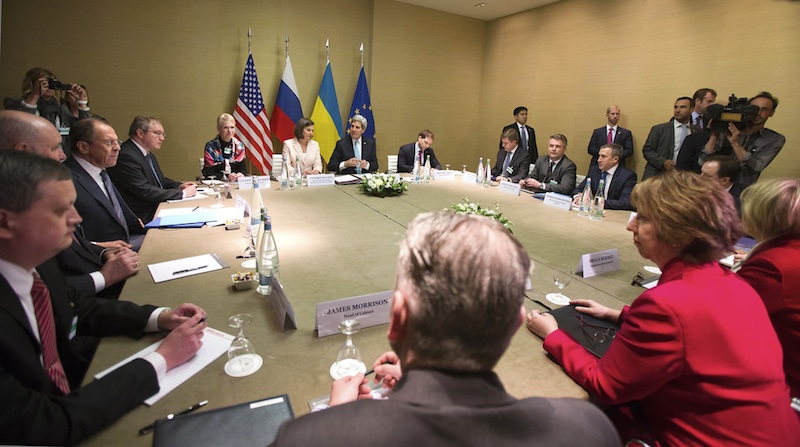 The Politics of Red Lines

The world ... regards the United States as a 'pariah state' and 'the greatest threat to world peace,' with no competitor even close in the polls. But what does the world know?

The current Ukraine crisis is serious and threatening, so much so that some commentators even compare it to the Cuban missile crisis of 1962.

Columnist Thanassis Cambanis summarizes the core issue succinctly in The Boston Globe: “[President Vladimir V.] Putin's annexation of the Crimea is a break in the order that America and its allies have come to rely on since the end of the Cold War—namely, one in which major powers only intervene militarily when they have an international consensus on their side, or failing that, when they're not crossing a rival power's red lines.”

This era's most extreme international crime, the United States-United Kingdom invasion of Iraq, was therefore not a break in world order—because, after failing to gain international support, the aggressors didn't cross Russian or Chinese red lines.

In contrast, Putin's takeover of the Crimea and his ambitions in Ukraine cross American red lines.

Therefore “Obama is focused on isolating Putin's Russia by cutting off its economic and political ties to the outside world, limiting its expansionist ambitions in its own neighborhood and effectively making it a pariah state,” Peter Baker reports in The New York Times.

The point generalizes. Other countries are sometimes allowed to have red lines—at their borders (where the United States' red lines are also located). But not Iraq, for example. Or Iran, which the U.S. continually threatens with attack (“no options are off the table”).

Such threats violate not only the United Nations Charter but also the General Assembly resolution condemning Russia that the United States just signed. The resolution opened by stressing the U.N. Charter ban on “the threat or use of force” in international affairs.

In this case too, the United States' red lines were at Russia's borders, and that was accepted on all sides.

The U.S. invasion of Indochina, like the invasion of Iraq, crossed no red lines, nor have many other U.S. depredations worldwide. To repeat the crucial point: Adversaries are sometimes permitted to have red lines, but at their borders, where America's red lines are also located. If an adversary has “expansionist ambitions in its own neighborhood,” crossing U.S. red lines, the world faces a crisis.

In the current issue of the Harvard-MIT journal International Security, Oxford University professor Yuen Foong Khong explains that there is a “long (and bipartisan) tradition in American strategic thinking: Successive administrations have emphasized that a vital interest of the United States is to prevent a hostile hegemon from dominating any of the major regions of the world.”

Furthermore, it is generally agreed that the United States must “maintain its predominance,” because “it is U.S. hegemony that has upheld regional peace and stability”—the latter a term of art referring to subordination to U.S. demands.

As it happens, the world thinks differently and regards the United States as a “pariah state” and “the greatest threat to world peace,” with no competitor even close in the polls. But what does the world know?

Khong's article concerns the crisis in Asia, caused by the rise of China, which is moving toward “economic primacy in Asia” and, like Russia, has “expansionist ambitions in its own neighborhood,” thus crossing American red lines.

President Obama's recent Asia trip was to affirm the “long (and bipartisan) tradition,” in diplomatic language.

The near-universal Western condemnation of Putin includes citing the “emotional address” in which he complained bitterly that the U.S. and its allies had “cheated us again and again, made decisions behind our back, presenting us with completed facts with the expansion of NATO in the East, with the deployment of military infrastructure at our borders. They always told us the same thing: 'Well, this doesn't involve you.' “

Putin's complaints are factually accurate. When President Gorbachev accepted the unification of Germany as part of NATO—an astonishing concession in the light of history—there was a quid pro quo. Washington agreed that NATO would not move “one inch eastward,” referring to East Germany.

The promise was immediately broken, and when Gorbachev complained, he was instructed that it was only a verbal promise, so without force.

President Clinton proceeded to expand NATO much farther to the east, to Russia's borders. Today there are calls to extend NATO even to Ukraine, deep into the historic Russian “neighborhood.” But it “doesn't involve” the Russians, because its responsibility to “uphold peace and stability” requires that American red lines are at Russia's borders.

Russia's annexation of Crimea was an illegal act, in violation of international law and specific treaties. It's not easy to find anything comparable in recent years—the Iraq invasion is a vastly greater crime.

But one comparable example comes to mind: U.S. control of Guantanamo Bay in southeastern Cuba. Guantanamo was wrested from Cuba at gunpoint in 1903 and not relinquished despite Cuba's demands ever since it attained independence in 1959.

To be sure, Russia has a far stronger case. Even apart from strong internal support for the annexation, Crimea is historically Russian; it has Russia's only warm-water port, the home of Russia's fleet; and has enormous strategic significance. The United States has no claim at all to Guantanamo, other than its monopoly of force.

One reason why the United States refuses to return Guantanamo to Cuba, presumably, is that this is a major harbor and American control of the region severely hampers Cuban development. That has been a major U.S. policy goal for 50 years, including large-scale terror and economic warfare.

The United States claims that it is shocked by Cuban human rights violations, overlooking the fact that the worst such violations are in Guantanamo; that valid charges against Cuba do not begin to compare with regular practices among Washington's Latin American clients; and that Cuba has been under severe, unremitting U.S. attack since its independence.

But none of this crosses anyone's red lines or causes a crisis. It falls into the category of the U.S. invasions of Indochina and Iraq, the regular overthrow of parliamentary regimes and installation of vicious dictatorships, and our hideous record of other exercises of “upholding peace and stability.”