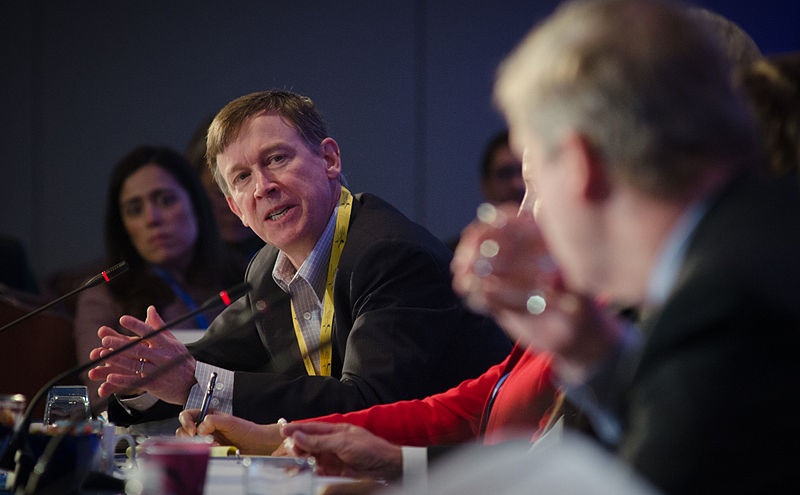 As Colorado weighs fracking regulation, much of the debate has focused on related ballot measures' effects on the careers of Gov. Hickenlooper (left) and his colleagues. (Lance Cheung / Flickr / Creative Commons)

It’s Not All About November

With all their political gamesmanship, lawmakers forget that real human lives are often on the line.

Birth defects and toxic pollution—this is serious and macabre stuff. You might therefore think that politicians would refrain from portraying such issues as important only for how they might affect the next election.

It is hardly controversial to say that one of the big turnoffs about American politics is its disconnect with even the most grim human consequences. No matter how serious the issue, the political class seems pathologically determined to present everything as a fun-and-games, red-versus-blue battle whose only important consequences have to do with the next election. As politicians, operatives and reporters focus primarily on the horse-race discussion of ever-more-grave issues, the life-and-death human ramifications for millions of people are effectively written out of our democratic discourse.

There are plenty of examples of this odious dynamic, but perhaps this era's textbook case comes from a recent article in Politico magazine about natural gas exploration in Colorado—and more specifically, the extractive process known as fracking.

The context for the article is key: It appeared only weeks after the release of a Colorado School of Public Health study showing a potential link between birth defects and proximity to Colorado fracking sites. That study followed others showing possible links between fracking in Colorado and health hazards such as water and air pollution.

Birth defects and toxic pollution—this is serious and macabre stuff. You might therefore think that politicians would refrain from portraying such issues as important only for how they might affect the next election. You might also think that even the most hardened politicos would be sure to at least pay lip service to the idea that actual lives—not just professional politicians' careers—are at stake.

But, of course, you would be wrong.

Over the course of Politico's 2,500-word article, there are only scant mentions of health implications. Instead, the piece teems with quotes from various Colorado pols about a ballot measure to let communities regulate fracking. Most of those quotes, though, aren't about whether that ballot measure will help protect ordinary people from being poisoned. They are about political prevarication and whether the ballot measure will help or hurt the electoral chances of Colorado Gov. John Hickenlooper (D) and U.S. Senator Mark Udall (D-Colo.).

In one exchange, for instance, Hickenlooper casts the issue as just another bloodless matter of tactics and economics. “Striking the right balance between local control and private property rights is the next big challenge,” he said.

In another section, Hickenlooper's chief of staff casts the ballot measure not as addressing an extraction practice possibly imperiling young children, but one primarily imperiling politicians. “It’s like setting off a grenade in a closet—you never know if someone’s going to get killed,” he said—the “killed” being the politicians' election chances, not the masses of ordinary Coloradans possibly being harmed.

But the most revealing quote of all came from Republican Josh Penry, a failed gubernatorial candidate now working in the fossil fuel industry. Despite all the news of birth defects and health problems, he caustically depicted the entire issue as merely of concern to professional officeholders, gleefully claiming the ballot measure is “a slow motion train wreck for Mark Udall and every other Democrat up and down the ballot.”

I could go on, but I won't. This display of arrogance and self-absorption from Colorado's political class is but a microcosmic example. Indeed, no matter where you are reading this column, there are examples of real-life catastrophes with real-life ramifications being treated by political elites as just more “grenades” in their self-serving political wars.

In those wars, social emergencies are treated as partisan battlefields, and politicians are the field generals using human beings as cannon fodder. Worst of all, life-and-death crises are now viewed exclusively as political weapons rather than as pressing problems that need to be solved.