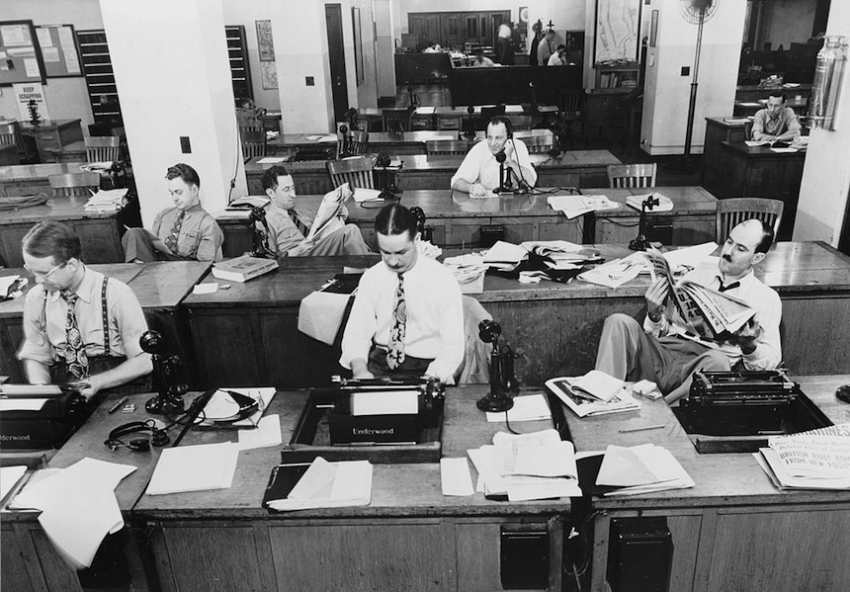 Much has changed in journalism since these New York Times reporters and editors worked on their stories in 1942. (Library of Congress / Wikimedia Commons)

Too often these days, journalists are afraid to challenge those in power.

The risks and costs associated with adversarial journalism have reduced 'the job' to that of a loyal state- and corporate-aligned journalist.

When I went into journalism, one of the first things I was told as a freshman is that journalism is different from stenography. It is supposed to be—or at least has been—about using rights granted under the First Amendment to be a check on government and corporate power.

Yet, the hedge in that last sentence is deliberate—and appropriate. That's because a new survey from the Indiana University suggests things are fast changing in the news industry—and not for the better.

The latest in 42 years worth of surveys of journalists, this one polled more than 1,000 reporters in the latter half of 2013. That timeframe is significant—it was right when revelations about the NSA’s mass surveillance were being published.

You might think such an historic time period in the annals of journalism would only strengthen reporters’ belief in the necessity of responsibly—but fearlessly—publishing information, even if the powers that be do not authorize such publication. Instead, it seems the exact opposite has happened.

As IU researchers note, “the percentage of U.S. journalists endorsing the occasional use of ‘confidential business or government documents without authorization,’ dropped significantly from 81.8 percent in 1992 to 57.7 percent in 2013.”

To really understand the implications of this shift, think back to almost every famous investigative scoop. Then ask yourself: What would have happened to those stories had they only come to one of those 4 in 10 reporters who oppose the use of “confidential business or government documents without authorization”?

The answer, most likely, is that those stories would never have been published, and history might have unfolded in an entirely different way. Maybe “The Jungle” would never have been written, and then the most basic food safety standards would never have become law. Maybe Richard Nixon would have served two full terms. And maybe we would still know very little about just how much our own government is surveilling us.

Noting all this isn’t to dismiss the trepidation that comes with doing real investigative journalism. After all, when you do that kind of work, you inevitably run the risk of legal threats and intimidation. You are also all but guaranteed to face the scorn of state-aligned or corporate-aligned journalists—i.e. those reporters who predicate their work on echoing, amplifying and pleasing those in power.

But all of those costs are an unavoidable part of the job, at least if you think “the job” is reporting information, without fear or favor, in the public interest.

That definition, though, may not be so sacrosanct anymore. “The job” is now defined differently depending on where you may be in the news ecosystem. And in much of that ecosystem, the risks and costs associated with adversarial journalism have reduced “the job” to that of a loyal state-and corporate-aligned journalist. This is why so many Washington reporters publicly slammed the NSA disclosures. It also explains why financial journalists so often defend Wall Street.

Simply put, the path that avoids regular confrontation with power is often far easier, less risky and more lucrative in the news business. Thus, it has become the preferred path du jour, to the point where almost half of the news business does not support reporting news that the government and corporations don’t want reported. And who knows? Maybe the next IU survey 10 years from now shows a full-on majority of journalists saying news outlets shouldn’t publish without the express consent of the corporations and governments.

That would no doubt make the CEOs and politicians quite happy, but it would be a tragedy for the rest of us.