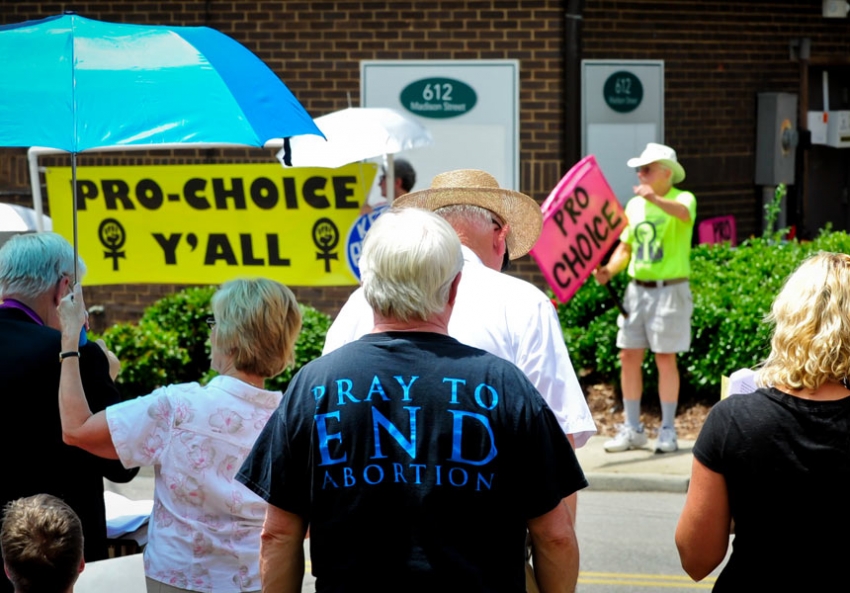 On July 1, anti-abortion and pro-choice advocates face off in front of the shuttered Huntsville abortion clinic. (Al.com/Landov)

Amidst uproar over a new law threatening three clinics, a fourth was quietly shut down.

As of June 30, the city of Huntsville was without an abortion provider, leaving pregnant people with no place to seek an abortion between Tuscaloosa, Alabama, and Memphis, Tennessee—a stretch of some 230 miles.

Early this summer, the eyes of the nation’s abortion-rights supporters and opponents were locked on Montgomery, Alabama. The ACLU of Alabama and clinic owners were attempting to persuade a federal judge that a new requirement that abortion clinics have admitting privileges at local hospitals was a naked attempt to shut down most of the clinics in the state. We won’t learn until the end of July whether the judge will uphold the lower court’s block on that rule. If it is allowed to go into effect, only two of Alabama’s five abortion clinics will remain operational.

Or maybe just one.

While most of the attention has been focused on the three clinics that are unable to obtain (medically unnecessary) admitting privileges at nearby hospitals, there is another portion of the state’s new Targeted Regulation of Abortion Providers (TRAP) law that wasn’t challenged in court: a set of new, expensive and medically meaningless building standards for clinics. These, which went into effect on July 1, include regulations on the set-up of stairwells, even if only administrative offices are above the first floor.

Most clinics could adhere to the new building requirements but couldn’t get admitting privileges. The Alabama Women’s Center for Reproductive Alternatives in Huntsville had the opposite problem. The clinic’s physicians have ties to the local Crestwood Hospital, and hospital administrators dismissed outright a bid by local anti-abortion group Christian Coalition of Alabama to pressure the hospital into severing them.

But the building and zoning requirements were impossible to meet in their current building. For one thing, if they widened halls to meet the specifications, then exam rooms would be too small. For another, simply bringing the building up to standard would cost an estimated $200,000, according to clinic administrator Dalton Johnson. Instead, the owners purchased a new building that needs minimal updates to meet the code. They shuttered the doors of their old building on June 27, turned in their license on June 30, and are preparing to move their practice and apply for a new license from the Alabama Department of Health—at least, that is, if abortion opponents will let them.

Local anti-abortion groups are trying to pressure the state Department of Public Health into refusing the clinic a new license, and simultaneously to convince the City Council to rezone the clinic’s new home so that it can’t operate.

Tensions between the clinic and the local abortion opponents have been high for years. In 2012, a clinic escort filed assault charges after a protester sprayed “holy water” on her. Protesters later filed separate charges claiming a different escort had assaulted them while trying to get a patient through the gauntlet and into the clinic.

While animosity lingers between the pro- and anti-abortion-rights groups, actual interaction has dwindled since the city allotted separate spaces to the two sides, with the clinic supporters winning a permit to congregate on the sidewalk in front of the clinic while protesters must remain further down the street, keeping physical contact to a minimum.

There are no such restrictions in front of the probable site for the new clinic, and abortion protesters are taking advantage of that fact. Led by the Christian Coalition of Alabama’s Rev. James Henderson, abortion opponents have been protesting the still-unofficial site, which is located near a middle school, ever since news of the purchase broke. The protesters justify their efforts by saying the neighborhood needs to be prepared for what will happen if the clinic is allowed to open.

Clinic supporters have been undaunted by Henderson and his allies’ attempts to persuade the state to refuse the clinic a license and the city to rezone the area. They have worked with local police to create a painted line on the sidewalks delineating how close protesters can get to the new building itself. And Huntsville police officers have already issued written warnings to a few regular protesters about the consequences of trespassing.

Huntsville clinic escorts say that battling Henderson at the new site is no different from battling him at the old building. “From the time we first started volunteering at the clinic, we’ve fought against James Henderson and the groups who would try to close it down,” says Huntsville activist Anathalee Sandlin. “Every time we’ve encountered a problem we’ve met it head-on, either by meeting with the authorities or countering negative press, and prevailed. I don’t see that this time will be any different.”

Advocates are doing more than just working with the police in preparation for the new opening; they’re working with the media and the community as well. Where Henderson has sought to have abortion opponents contact the health department or local City Council members, the newly formed Alabama Reproductive Rights Advocates (ARRA) has begun its own public relations campaign on behalf of the Huntsville clinic, reaching out to local media with letters and statements battling the idea that abortion is a form of “black genocide”—as the Christian Coalition is claiming—or that their move will disrupt local schools, who would never even realize they were there if abortion opponents didn’t insist on picketing the clinic with graphic, bloody signage.

Their story has gone national, getting mentions from blogs, news sites and the Rev. Al Sharpton on his MSNBC show, PoliticsNation. They’ve even gathered signatures of supporters who want to see the clinic reopened, with nearly 600 signatures gathered in just 24 hours, which the group intends to take to the mayor’s office to bolster their case.

“The Alabama Legislature may have thought they were going to wear us down by attempting to close our clinics, but they only made us stronger,” says Mia Raven, ARRA’s director of legislative affairs. “Out of their machinations we formed ARRA, and we are more dedicated than ever to give every Alabama woman a voice for choice.”

As of June 30, the city of Huntsville was without an abortion provider, leaving pregnant people with no place to seek an abortion between Tuscaloosa, Alabama, and Memphis, Tennessee—a stretch of some 230 miles. But if all goes well, within a few weeks the blueprints on the new clinic will be approved, the certificate of occupancy obtained and the new license issued, and legal, safe abortion will be an option once again.

Robin Marty is an activist, speaker and freelance reporter covering abortion access. She is the author of the forthcoming Handbook for a Post-Roe America (Seven Stories Press, January 2019) and Crow After Roe: How Women's Health Is the New "Separate But Equal" and How to Change That. Robin’s articles have appeared at Bitch Magazine, Rolling Stone, Ms. Magazine, Truth Out, AlterNet, BlogHer, RH Reality Check and Care2.org, and she has spoken at trainings and conferences for NOW, NARAL, the National Conference for Media Reform and Netroots Nation.