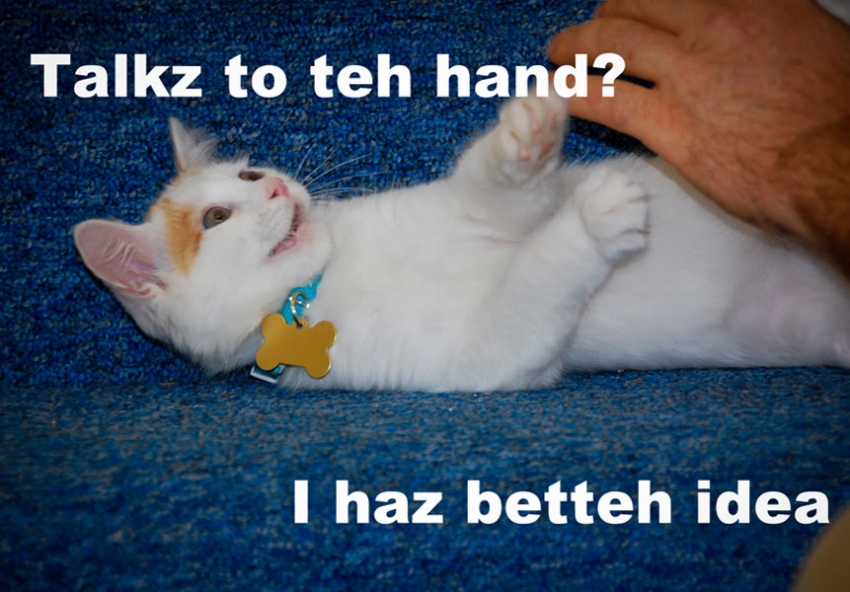 LOL: Threaten access to the Internet's favorite memes and the kitten won't be laughing long.

All Aboard for Net Neutrality

Why the Internet should be regulated like the railroads.

'It’s de facto segregation. It feels like really shiny PR language to me,' says Deloney. 'It’s no different than saying we have two different drinking fountains, and one just happens to be for white use only.'

The future of net neutrality—the idea that Internet Service Providers (ISPs) should treat all content equally—has never been so uncertain. In the absence of new federal action, telecom behemoths like Verizon and Comcast could soon ask deep-pocketed websites to pony up for speedier delivery of their content, leaving everyone else in the dust. Smaller sites could suffer from frustratingly slow loading speeds.

Technically, there’s nothing on the books to stop this. In January, a federal appeals court threw out major portions of an FCC order to prohibit providers from discriminating against content, ruling that the agency lacks that authority. That forced the FCC back to the drawing board: In May, it issued a notice of proposed rulemaking on “how best to protect and promote an open Internet.” Much to the delight of Big Telecom, the FCC’s current proposal allows for a pay-to-play system,paving the way for Internet fast lanes and slow lanes. A four-month public comment period expires on September 10; the agency is expected to issue rules later that month. As the future of the Internet hangs in the balance, activists are uniting behind a common demand. They say the FCC needs to classify broadband—high-speed, non-dial-up Internet—as a “common carrier,” the same way the agency treats telephone communication. (Landline providers, for instance, cannot offer faster phone service to those willing to pay more or block parts of conversations simply because they don’t like them.) The common carrier designation would give the FCC a stronger hand in combating discriminatory practices.

It would also help the FCC fend off legal challenges to its authority. “Common carrier status would put the FCC back on rock-solid footing,” says Matt Wood, policy director at Free Press, which has galvanized online activists around net neutrality.

And in the long run, say advocates, common carrier could lay the foundation for a more progressive Internet landscape.

The case for common carrier

Before 1887, rail oligarchs routinely offered friendly shipping rates to bigwig partners like Standard Oil while charging exorbitant prices to less powerful customers like independent farmers. But in response to growing public outcry, Congress created the Interstate Commerce Commission. The agency declared railroads to be a “common carrier” and, on that basis, cracked down on industry-wide price discrimination. To many net neutrality advocates, Big Telecom’s ambitions mirror those of yesteryear’s monopolists and demand the same type of firm intervention.

The FCC justified its two previous open Internet orders according to Section 706 of the 1996 Telecommunications Act. But that method doesn’t have the best track record. Courts have struck down major parts of both orders on the grounds that they unfairly imposed common carrier-like standards on ISPs without actually classifying broadband as a common carrier. Susan Crawford, a professor at Yeshiva University’s Cardozo School of Law, has called the FCC’s delicate stance a “house of cards.”

Instead of dancing around the issue once again, advocates say the FCC should simply embrace the common carrier designation that’s outlined in Title II of the 1934 Communications Act.

With that change, users would “have certain rights, even though it’s a private party providing you with service. They’re not supposed to interfere with your use of that service. They don’t get to decide where you go, what you say,” says Wood. “If Verizon Wireless said, ‘We’re going to block your phone calls to a certain number because you could always switch to AT&T or Sprint if you don’t like it,’ people would think that’s crazy. They’d say, ‘That’s not how phones are supposed to work.’ ”

The reclassification wouldn’t just protect the open Internet against corporate-backed legal challenges. It would also reinforce the idea of the Internet as a public good.

“[A shift to Title II regulation] gives people a different framework,” says Amalia Deloney, associate director of the Center for Media Justice (CMJ), a group that advocates media reforms designed to combat racism and poverty. “It makes it easier for people to understand what they know to be true, which is that the Internet is not a luxury; it’s a necessity.”

A move to common carrier could open up the door for more reforms in the future—say, the expansion of publicly managed broadband service on the city or state levels. That’s one step closer to treating the Internet like the public utility that it already is to many.

“You wouldn’t be having conversations about denying whole neighborhoods access to electricity or running water. That just wouldn’t be tolerable,” Deloney says. “We need to think about broadband in the same context.”

CMJ activists worry that, given marginalized communities’ reliance on digital rabble-rousing, a tiered Internet will lead to services tilted in favor of the already privileged.

“It’s de facto segregation. It feels like really shiny PR language to me,” says Deloney. “It’s no different than saying we have two different drinking fountains, and one just happens to be for white use only.”

LOLcats to the rescue

The crux of the debate—should the FCC regulate ISPs according to Section 706 of the 1996 Telecommunications Act or Title II of the 1934 Communications Act?—can seem exasperatingly dry. But the complexity of the issue, if not the outright tediousness of federal regulatory policy, hasn’t managed to prevent a groundswell of activism.

So far, 130,000 people have submitted comments to the FCC—most of them calling on the agency to implement strong net neutrality protections. More than 100,000 people have signed a White House petition that calls on the president to direct the FCC to classify ISPs as common carriers. The debate has managed to seep into pop culture. In June, late-night talk show host John Oliver’s plea for online “trolls” to flood the FCC’s comment box with pro-net neutrality propaganda caused the agency’s site to shut down for a few hours.

David Segal, executive director of the online advocacy group Demand Progress, says it’s easy to get web denizens fired up when their favorite content—whether it’s Facebook, YouTube or popular Internet memes such as “LOLcats”—is under attack.

While these methods may seem shallow, Segal says, “it’s a potentially radicalizing moment that you can use to flip on a switch in people and give them a more politicized view of the world. And hopefully some number of people who enter activism because of an issue like this can be educated and come to understand the underlying structures that create moments like these and become more broad-based activists.”

Will the FCC listen?

Some net neutrality advocates worry that the FCC will disregard the outcry.

FCC Chairman Tom Wheeler is a former telecom executive with no shortage of lobbying experience; he spent five years as the president and CEO of the National Cable Television Association, and 12 years as the head of the Cellular Telecommunications and Internet Association, serving until 2004. His former colleagues from Big Telecom have poured millions into this fight, lobbying regulators and members of Congress alike. (Comcast spent $18.8 million on lobbying activities last year, second only to Northrop Grumman, a global security company.) So while net neutrality advocates are hopeful the FCC crafts its new rules in response to public opinion, many doubt the agency will do so.

“We hope that the FCC does the right thing,” says Deloney. “If they don’t, it will be because they turned their backs on the overwhelming evidence this country has provided.”