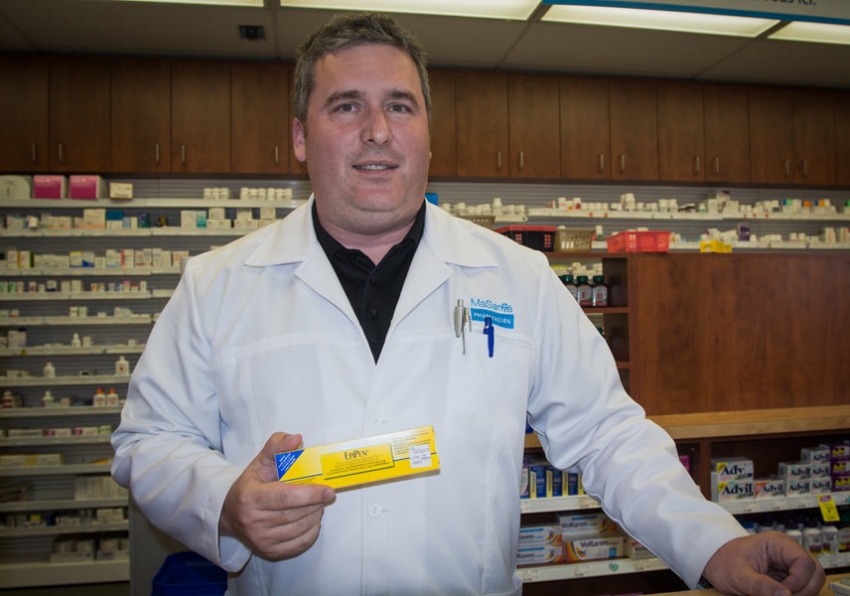 Pharmacist Mario Milot, of Sutton, Quebec, sells EpiPens for a fraction of what they cost in the States.

Road trip! Or, two middle-aged women go on a Hunter S. Thompson-esque drug-buying spree across an international border. And score.

EpiPens used to be cheap—just $35.59 wholesale in 1986. Harvie now pays $333 for a two-pack—the only option (which, given an 18-month-from-manufacture shelf life, ensures waste and risks reliance on an expired device).

Well, maybe the trip is more phlegmatic Fred Thompson than gonzo Hunter S. And maybe we scarf grilled veggies and espresso instead of cocaine and booze (although rum will enter the picture), but we do cop drugs.

The adventure began with a rant: “The last time I bought an EpiPen, it cost $60, and that was too much. Now it’s $380. You’re a reporter. Look into this.” My marching orders came from Mary, a friend whose drugs aren’t covered by insurance. Allergic to bees, she could die of anaphylactic shock if stung. Millions of kids and adults are similarly vulnerable—peanuts, stings, various meds can swell shut their airways. Their lives may depend on a pen-shaped, plastic delivery device for self-injecting a quickacting dose of epinephrine.

“If you balk at the price, you’ll be muttering, ‘I wish I’d bought it,’ as you breathe your last,” growls Mary. “The extortionate price is a drop in the bucket of what’s wrong with healthcare.”

Actually, it pretty much sums up the whole rotten bucket. First synthesized in 1904, epinephrine, aka adrenaline, is now a dirtcheap generic. If your doctor prescribed it, says Vermont pharmacist Rich Harvie, you could buy a pre-loaded syringe of epinephrine for under $20. But the more foolproof delivery device—the pen in EpiPen—was patented in 1977, meaning that Mylan, the U.S. marketer, and Pfizer, the manufacturer, have a license to gouge. An EpiPen’s price, says Harvie, “is ridiculous, just awful.” And since it requires a prescription in the United States, a doctor’s visit can boost the cost.

EpiPens used to be cheap—just $35.59 wholesale in 1986. Harvie now pays $333 for a two-pack—the only option (which, given an 18-month-from-manufacture shelf life, risks waste and reliance on an expired device).

What makes life-and-death EpiPens a poster child for Big Pharma greed is that the industry’s usual excuses for exorbitant pricing don’t apply. R&D costs? The delivery system was developed on the taxpayers’ dime by military/NASA engineer Sheldon Kaplan (who never got a penny in royalties) to inject atropine to counter battlefield nerve gas. Minor modifications suited it to epinephrine. Educational/marketing costs? Every doctor already knows about EpiPens. A limited customer base? With allergies on the rise and millions of EpiPens sold globally, economy of scale is built in, and a repeat market is guaranteed by quick expiration and dire need. EpiPen earned Mylan a tidy $640 million in 2012, the New York Times reported.

It is not only brand-name and patented drugs that escalate U.S. healthcare costs. A variety of U.S. generics—whether from coincidence or collusion—cost consumers similarly high prices. “I’ve seen all the generic [drug] companies raise prices the same 500 percent overnight,” says Harvie.

I tried repeatedly to talk to Pfizer and Mylan to ask why their device costs $360 to $435 retail, but no one would actually speak to me, and all I could extract were emails regurgitating PR gruel.

So back to our excellent adventure. We entered Canada from Vermont via a tiny border crossing and headed to Sutton, Quebec. Hunter S. would have sneered at our bistro lunch and stroll past très charmant tourist shops to Pharmacie Mario Milot & Mathieu Bélisle. “I’d like to buy an EpiPen,” I told the pharmacist. “Have you a prescription, madam?” M. Milot asked. “But I was told it was over-the-counter.” “Yes, but without [an insurance-backed] prescription, it will be so extremely expensive: US $94.”

To celebrate my pyrrhic victory, I bought a bottle of U.S.-embargoed Cuban rum, stuck it under the drugs and smoked duck, and passed through U.S. customs. I thought of the nice Canadian pharmacist’s sadness at my having to fork out $94—until I told him how much more EpiPens cost only 10 miles south. “But why?” he asked. Good question, monsieur.

I’ll go out on a limb and say greed, or, as a pharma-shill stoned enough on samples to be honest would admit: “Whatever the market will bear,” or “Because we can, suckers.” And if people are forced to rely on expired EpiPens, or do without? Well, that’s the way the U.S. healthcare system—and the peanut-allergic kid—crumbles.