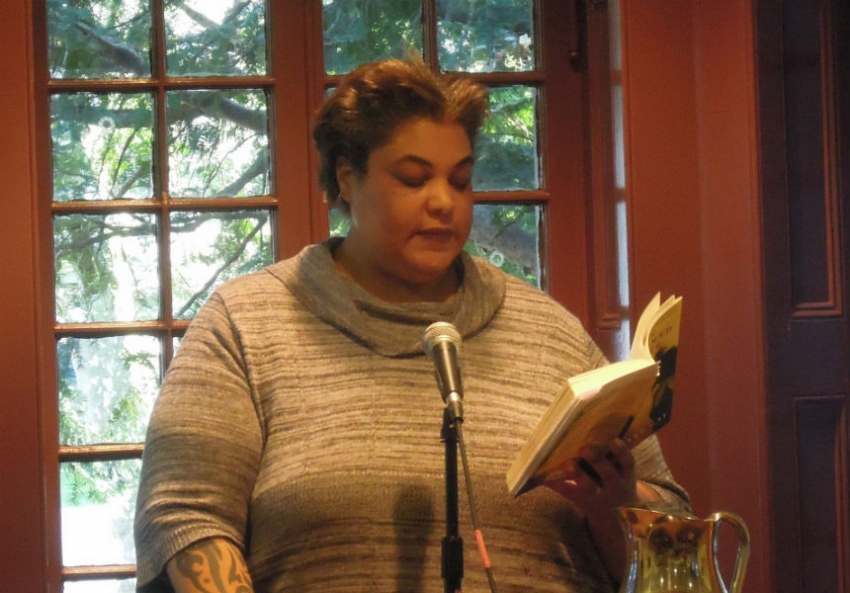 Though Roxane Gay, pictured here at a book reading in April, writes routinely from her own experiences, she never allows her persona to dominate her essays. (Kelly Writers House / Flickr / Creative Commons)

Lessons From a ‘Bad Feminist’

It is a strangely true fact that in 2014, it is easier than ever to identify as a feminist. And yet, I doubt even one of us is completely happy with the state of feminism in 2014.

First, the “easy” part. Educating oneself about feminism pre-Internet was no simple task. To access the information, a would-be feminist had to be located near the action, meaning that you had to hope against hope that your city had a thriving feminist community, or else have the privilege of attending a college with a good women’s studies program. As a teenager in small-town Ohio in the '90s, my feminist education was mostly gleaned from rock lyrics (many of them from women like PJ Harvey, who denied being feminist when interviewers asked her about it) and secondhand paperbacks I found at a food co-op. Barnes & Noble had a miniscule “women’s studies” section, and major magazines like TIME sometimes ran stories about feminism—usually to announce that Ally McBeal had killed it or the like.

Fast-forward to 2014, and feminists—and feminism—are everywhere. Beyoncé, the most popular music artist on the planet, posed as Rosie the Riveter on Instagram and samples Chimamanda Ngozi Adichie’s definition of feminism on her latest album. Top-grossing children’s movies like Frozen or Maleficent tell stories about how the love of a sister is worth more than that of a loser boyfriend; Katniss Everdeen is the action heroine of a generation. To find pro-feminist media coverage, you only need an Internet connection and the ability to Google: Larger independent feminist blogs like Feministing and Feministe do the work of dredging up otherwise-obscure news stories and providing analysis. And there are also mainstream feminist-friendly publications like Rookie, Jezebel, and XOJane, as well as sub-sections like Slate’s Double X. (Whether or not you agree with or like everything these outlets publish, they exist; opportunities to read about feminism in a mainstream publication are no longer confined to “waiting for TIME to publish its twice-a-decade obituary of feminism.”) There’s a constant buzz of coverage, analysis, protest and debate on Tumblr and Twitter. Finding that once-rare feminist community is as easy as registering for a free social media account.

Yet, for all that, the path to gender equality still doesn’t seem clear. The Supreme Court continues to make ridiculous, Paleolithic decisions on women’s health. Rape culture is still alive, well and wrecking lives. For every “Flawless” or Frozen, there are ten overtly misogynistic singles like “Blurred Lines” and movies in which women barely show up on screen, let alone talk to each other. According to just about everyone, the feminist media boom is flawed: Many, many women of color have pointed out that the feminists most likely to crack the mainstream are the ones with the most pre-existing privilege. Others worry that the nature of the Internet takes nuance out of the equation; that, in the words of the New York Times, it “demands self-congratulatory clique-building and fresh outrage every hour on the hour.” We have more than ever, but we don’t have enough.

All of which is a reason to be grateful for the work of author Roxane Gay. Her new essay collection Bad Feminist collects much of her political writing over the past 18 years. Since much of this work has been very popular, and some of it has become a mainstay of the progressive conversation—like “The Illusion of Safety/The Safety of Illusion,” a Rumpus essay about Gay’s skepticism of trigger warnings (brief warnings that a discussion or piece of writing contains disturbing content)—chunks of the book will probably feel familiar to Gay’s fans. Yet taken all together, it provides a very welcome tour of the depth, complexity and humanity of her political thought.

The title of the collection comes from Gay’s skepticism about the expectations placed on public feminists. “When these figureheads say what we want to hear, we put them up on the Feminist Pedestal,” she says. “And when they do something we don’t like, we knock them right off and then we say there’s something wrong with feminism because our feminist leaders have failed us.” Gay, reasonably enough, would prefer never to occupy that pedestal: “People who are placed on pedestals are expected to pose, perfectly. Then they get knocked off when they fuck it up. I regularly fuck it up.” Yet the “failures” she admits to—dating conservatives, liking the color pink, listening to music with misogynist lyrics—aren’t so much damning as they are evidence she’s alive in the world.

And it’s the fact that she is willing to be so alive in her essays that makes them work. Gay writes routinely from her own experiences and identities as a woman of color, as the daughter of Haitian immigrants, as a rape survivor, as a woman who is not skinny, as a professor in the Midwest. Her persona doesn’t dominate the essays, instead locating them in a particular history. As a result, Gay roots her theory in the questions of how an oppressive world can limit or scar people, and how those people are forced to navigate that limiting world.

It’s the patience and nuance Gay applies to those questions that makes her work so very valuable. Her prose is typically careful, deliberate; at times, to a new reader, it can even feel a bit overly cool and restrained. She has a penchant for constructing runs of sentences that revolve around re-iterations of one root phrase, as when she writes about the Jerry Sandusky rape case:

But Gay’s repetition amounts to an act of public meditation, running through a phrase until it yields every truth it has. By returning, over and over, to “I don’t want to believe,” Gay uncovers the specific pain and shock of the case, in all its permutations.

Gay is never doctrinaire, never interested in the easy answer to any question and never interested in contrarianism for contrarianism’s sake. She instead remains engaged and compassionate throughout her work, untangling ideas slowly and meticulously, to find answers that are individual, specific and true, no matter what she’s writing about. “The Illusion of Safety” has become a classic for a good reason: The debate over trigger warnings had become (and still is) impossibly polarized. Those who support them frequently argue that not using them is an insensitive, callous form of bullying people with trauma. Those who opposed them argued that using or demanding trigger warnings is infantilizing, useless, a form of showing off one’s own advanced sensibilities at other people’s expense. Gay’s essay threads that needle perfectly, rejecting the utility of trigger warnings without once questioning the reality of triggers. The piece never minimizes or discounts the trauma of others, in part because Gay roots the discussion in her experience with post-traumatic stress. It’s challenging and unapologetic in its conclusions, yet never trashes or mocks anyone else’s take. To write a piece with that level of nuance, without callously alienating anyone, is a near-impossible feat, and it’s stunning to watch Gay pull it off.

And Gay pulls it off again and again in Bad Feminist. She is able to take on material  that is painful or rage-worthy—the racism of The Help, the New York Times’ slut-shaming of an eleven-year-old gang rape victim—while maintaining that same clear, brilliant, compassionate voice. The danger of writing about oppression, about the way the world brutalizes people, is that eventually the sheer amount of pain the writer is forced to consider on a daily basis will swamp her defenses; it is easy to become bitter, it is easy to become desperate, it is easy to become cruel. It is even easy, in the end, to become apathetic when it becomes apparent that no amount of fighting will ever be enough.

By contrast, Gay makes her anger and sorrow palpable—as in her scathing condemnation of Tyler Perry’s choice to punish a woman character’s sexuality with HIV, or her frustration with Caitlin Moran’s How To Be A Woman, which Gay says proves “people will turn a blind eye to casual racism for the sake of funny feminism.” But in “Dear Young Ladies Who Love Chris Brown So Much They Would Let Him Beat Them,” she doesn’t succumb to the temptation of grandstanding about how our society has normalized abuse. She reaches out to the young women for whom it’s been normalized, saying that “I am sorry our culture has treated women so poorly for so long that suffering abuse to receive celebrity attention seems like a fair and reasonable trade. We have failed you, utterly.”

It’s easy to find feminist media, even feminists, these days. But what’s rare—what will probably always be rare because it comes down to talent, an unevenly distributed resource—is to find work that is capable of remaining simultaneously clear-eyed and open-hearted, of knitting together different intersections and experiences of oppression, of remaining endlessly diligent about considering all the nuances of any given issue, while keeping the discussion perpetually tied to human experience and human needs. Roxane Gay’s writing is as complex as the world we live in, as the state of feminism in 2014, but she provides a clarity and illumination that is endlessly useful in helping her readers navigate a confused, confusing, imperfect world.