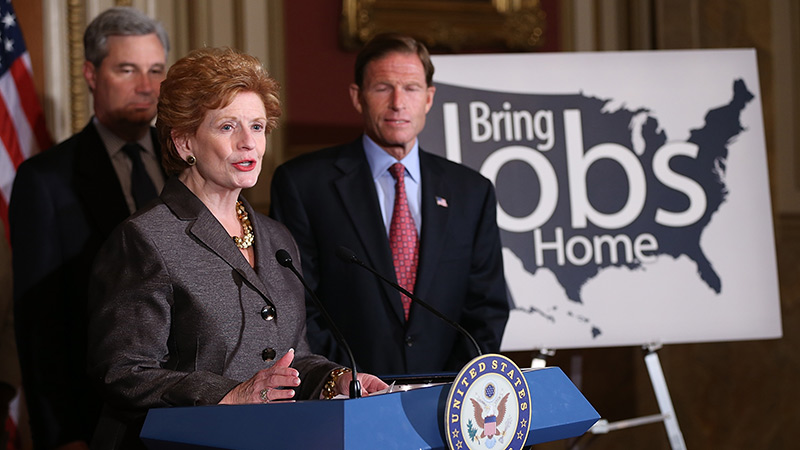 Sen. Debbie Stabenow (D-Mich.) helped lead the push for the Bring Jobs Home Act, a bill that would end tax breaks for companies that move jobs away from the United States, before it was shut down by the GOP. (Win McNamee / Getty)

It’s Time To Send the GOP a Message

Republicans have proved once again that they’re out of touch with what Americans want.

House Republicans last week overwhelmingly endorsed suing President Barack Obama for delaying part of the Affordable Care Act, a law Republicans hate and condemn and voted 50 times to repeal. So, really, the president did exactly what the GOP claims it wants. But they’re suing anyway.

On the other side of the Capitol, Senate Republicans last week prevented repair of a law that 99.99 percent of Americans hate and condemn and would vote 50 times to repeal, given the chance. The GOP blocked a bill that would have ended tax breaks bestowed on corporations for offshoring factories and jobs.

Only one Senate Republican voted for the Bring Jobs Home Act—the bill that would have replaced corporate reprobate rebates with rewards for firms that move factories back to America. Americans of all political persuasions object to paying higher taxes to offset the cost of coddling corporate defectors. The GOP’s filibustering of this bill is dereliction of duty. So let’s sue. And look at it this way, even if this is a lost cause—and it is—the more time Republicans must spend in court, the less time they have to obstruct the will of the people.

It made perfect sense. Why should American workers subsidize corporations for closing American factories, killing American jobs, destroying American communities and moving overseas? For 2.9 million Americans, that is not a hypothetical annoyance. Over the past decade, that’s how many American jobs U.S. corporations cut as they created 2.4 million overseas.

Republican presidential candidate Mitt Romney embodied the Senate GOP position. The issue smacked him in the face when workers at a Freeport, Illinois, factory pleaded with him to intervene on their behalf to stop their employer, Sensata, from sending their factory and their jobs to China.

The workers turned to Romney because the private equity firm he founded, Bain Capital, owned Sensata. It bought the Illinois facility in 2010 and immediately told the 170 workers there that it planned to close the factory and move the auto sensor-manufacturing equipment to China by the end of 2012.

As Romney campaigned in 2012, Sensata ferried Chinese nationals to Freeport and ordered the Illinois workers to train them on equipment that the company was preparing to transport to a new plant constructed for it by the Chinese government in the Jiangsu province.

To make the desertion even easier for Sensata, the American government would allow the corporation to write off some of the cost of the move for tax purposes. It’s a little bon voyage present paid for by American taxpayers who suffer when corporations move offshore.

That’s the very practice candidate Obama said he wanted to stop and that Senate Democrats, led by Debbie Stabenow of Michigan, John Walsh of Montana and Majority Leader Harry Reid of Nevada tried to end with the Bring Jobs Home Act.

Romney refused to intervene with his private equity firm to help the Illinois workers. And, similarly, Republicans in the Senate, except for Susan Collins of Maine, filibustered the Bring Jobs Home Act. A comfortable majority of 54 U.S. Senators supported it, but a minority of 42 Republicans stood in the way. They should be sued for forcing U.S. workers to help bankroll corporate abandonment of America.

Some Republican Senators stomped their feet and demanded continued subsidies for offshoring of jobs unless the entire tax code was overhauled, a feat that seems, well, somewhat unlikely from this record-breaking, do-nothing, Republican-thwarted Congress.

That’s not chump change, but for comparison purposes, the state of Tennessee gave Volkswagen $165.8 million this year to expand its Chattanooga assembly plant. In 2008, Tennessee gave VW $577 million to build the factory in the state. That’s more than $742 million from one state to one company over six years, or, to put it another way, $123 million a year. That’s nearly six times the annual national cost of the Bring Jobs Home Act.

Still, Tennessee Sen. Bob Corker, who was so instrumental in rounding up and handing over all of that Tennessee tax money to VW, voted against the Bring Jobs Home Act.

So, sue him, right? Because there’s something deeply wrong with forcing Tennessee taxpayers to spend hundreds of millions to bring jobs to their state, and, at the same time, subsidize corporations moving jobs out of the state and the country.

This is a defining vote. It shows Democrats supporting American jobs, American industry, American workers and American communities. It shows Republicans indulging corporations, no matter what they do, no matter how destructive their decisions are to the country.

Send the GOP a message. A lawsuit would be one gesture. But big-time election losses would work better.