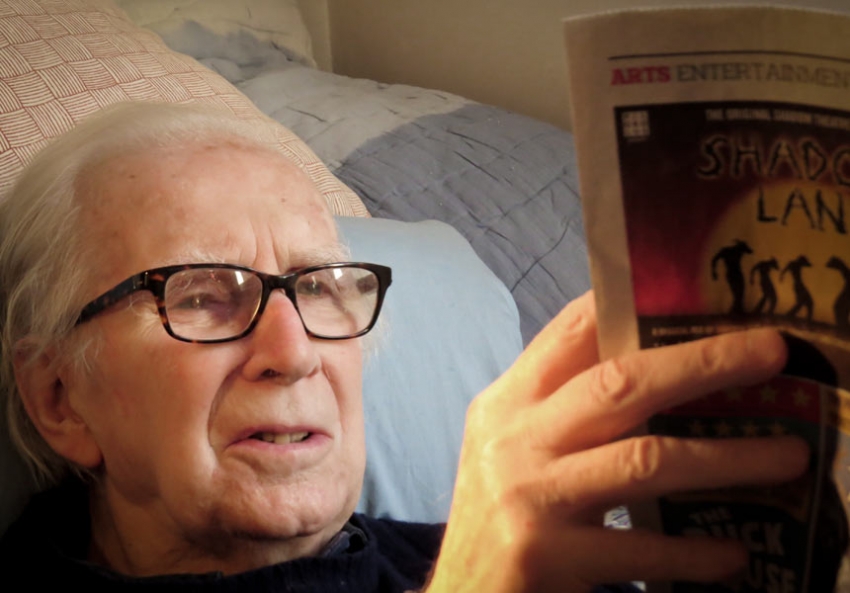 The author's husband, Karl Miller, founded the London Review of Books in 1979. (Photo courtesy of the Miller family)

A Sense of Life Ending

A long, slow end can be a treasure.

In principle Karl has been sent home to die, but he doesn’t seem interested in doing so at the moment and is even a little better than he was.

Karl, my witty, beautiful husband of nearly 60 years, has been ill for a long time. Diagnosed with one kind of cancer in 2006 and another (unconnected) in 2009, our local specialist hospital gave up on him this March and sent him home to what is called “palliative care in the community,” which in this case means me and our children. So, no chemotherapy and no more radiotherapy or surgery; just lots of free morphine. He sleeps a good deal, has vivid dreams where he and assorted friends swap poems and songs, which he writes down and edits for us when he wakes up. He describes his latest as “definitely the worst poem ever written.” Threaded through both his sleeping and waking dreams is a constant anxiety about a lost book or article he’s failed to write or to finish or to deliver on time.

While I walk to swimming in the morning, one son draws him curled up on his bed like a snail with thin, pale, elegant legs emerging from its shell. When he wakes up, the other son makes coffee and reads poems with him. They’re currently choosing poems by Samuel Johnson and Thom Gunn from a recent anthology of poetry about London. And Karl recites bits of “Tam o’ Shanter” and “To a Mouse” by Robert Burns. Sometimes he sings. Our daughter arrives with a delicious lunch or supper, talks to him and is a comfort to us both.

In principle Karl has been sent home to die, but he doesn’t seem interested in doing so at the moment and is even a little better than he was. He quite often comes downstairs for meals these days, and he eats well. We’ve hired a wheelchair for outings, and he gives each of us marks out of 10 for smooth steering and avoiding bumps on the pavement.

All this is coming to seem like normality. I try to remember a time when he had two full-time jobs and got home at 8 in the evening, and then later when he retired from work before I did and read and wrote in his study and had lunch with friends in restaurants and went to the London Library to collect six books with their labels like shields on the front. But those times are blotted out for me now by this new life. The floor round his bed is silted up with books and magazines he finds difficult, even painful, to read. We bought a TV set so that he could watch the World Cup on his bed with a grandson.

And there are visitors: old flames, old poets, old reviewers, old colleagues, old friends, young friends and relations. Karl is pleased to see them, though he worries that he’s no longer likely to amuse them. Many of them keep on coming, so I think he does. On the whole I prefer the men, who have no desire to rival or improve my nursing skills, offer tempting recipes or criticise arrangements. One woman worried that Karl was not getting enough in the way of intellectual stimulation, and thought it fortunate that he had sons and plenty of male friends.

He and I don’t talk about dying or death, perhaps because I don’t want him to tell me that he’d rather be dead, as he has told some of his friends. I don’t always tell him what doctors have told me, and I may not show him this account of our current lives. That is probably dishonest and cowardly of me, but he’s not all that interested in the progress of his illness and is usually happy to down a clutch of pills or a spoonful of morphine without asking what he’s consuming or why. Cancer often travels mysteriously and invisibly, and Karl has always been more exercised by his crippling arthritic pains, which are now pretty well morphine-assuaged. I sometimes feel that his deafness has affected our lives together more than all his other troubles. I deal crossly with demands to “speak up” and then “don’t shout” and respond rather woodenly to Karl’s endlessly inventive mishearings of what I actually say to him.

I think we are all treasuring this long, strange end of a life and our part in it, and we cheer up when there are small improvements, miniature pleasures, memorably funny moments. We’ve all slipped into new roles and had time to adapt to them. I suspect we’re much luckier than people whom death takes by surprise. But I wonder whether all this isn’t an indulgence for us, but unbearable for Karl. If it is, he’s even more stoical than he seems.