A Sense of Life Ending

A long, slow end can be a treasure. 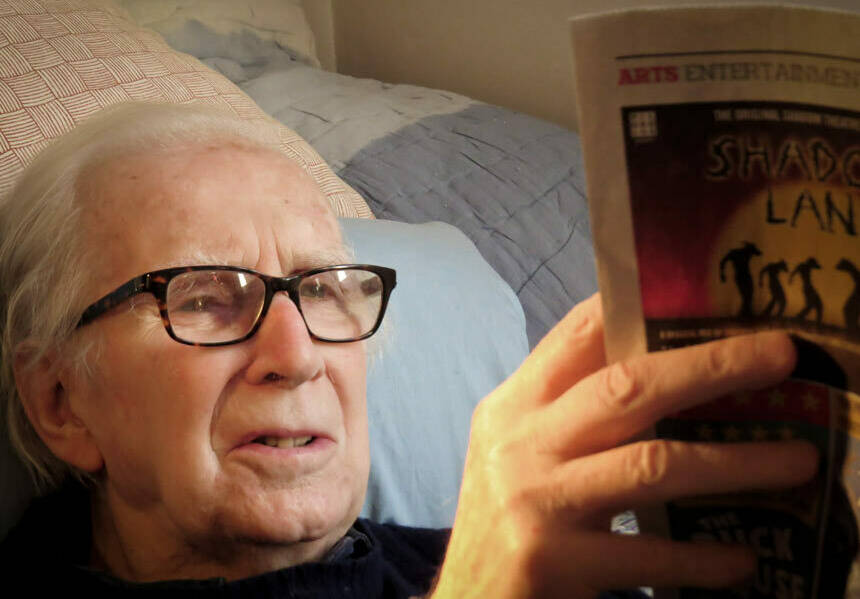 The author's husband, Karl Miller, founded the London Review of Books in 1979. (Photo courtesy of the Miller family)

Karl, my wit­ty, beau­ti­ful hus­band of near­ly 60 years, has been ill for a long time. Diag­nosed with one kind of can­cer in 2006 and anoth­er (uncon­nect­ed) in 2009, our local spe­cial­ist hos­pi­tal gave up on him this March and sent him home to what is called ​“pal­lia­tive care in the com­mu­ni­ty,” which in this case means me and our chil­dren. So, no chemother­a­py and no more radio­ther­a­py or surgery; just lots of free mor­phine. He sleeps a good deal, has vivid dreams where he and assort­ed friends swap poems and songs, which he writes down and edits for us when he wakes up. He describes his lat­est as ​“def­i­nite­ly the worst poem ever writ­ten.” Thread­ed through both his sleep­ing and wak­ing dreams is a con­stant anx­i­ety about a lost book or arti­cle he’s failed to write or to fin­ish or to deliv­er on time.

In principle Karl has been sent home to die, but he doesn’t seem interested in doing so at the moment and is even a little better than he was.

While I walk to swim­ming in the morn­ing, one son draws him curled up on his bed like a snail with thin, pale, ele­gant legs emerg­ing from its shell. When he wakes up, the oth­er son makes cof­fee and reads poems with him. They’re cur­rent­ly choos­ing poems by Samuel John­son and Thom Gunn from a recent anthol­o­gy of poet­ry about Lon­don. And Karl recites bits of ​“Tam o’ Shanter” and ​“To a Mouse” by Robert Burns. Some­times he sings. Our daugh­ter arrives with a deli­cious lunch or sup­per, talks to him and is a com­fort to us both.

In prin­ci­ple Karl has been sent home to die, but he doesn’t seem inter­est­ed in doing so at the moment and is even a lit­tle bet­ter than he was. He quite often comes down­stairs for meals these days, and he eats well. We’ve hired a wheel­chair for out­ings, and he gives each of us marks out of 10 for smooth steer­ing and avoid­ing bumps on the pavement.

All this is com­ing to seem like nor­mal­i­ty. I try to remem­ber a time when he had two full-time jobs and got home at 8 in the evening, and then lat­er when he retired from work before I did and read and wrote in his study and had lunch with friends in restau­rants and went to the Lon­don Library to col­lect six books with their labels like shields on the front. But those times are blot­ted out for me now by this new life. The floor round his bed is silt­ed up with books and mag­a­zines he finds dif­fi­cult, even painful, to read. We bought a TV set so that he could watch the World Cup on his bed with a grandson.

And there are vis­i­tors: old flames, old poets, old review­ers, old col­leagues, old friends, young friends and rela­tions. Karl is pleased to see them, though he wor­ries that he’s no longer like­ly to amuse them. Many of them keep on com­ing, so I think he does. On the whole I pre­fer the men, who have no desire to rival or improve my nurs­ing skills, offer tempt­ing recipes or crit­i­cise arrange­ments. One woman wor­ried that Karl was not get­ting enough in the way of intel­lec­tu­al stim­u­la­tion, and thought it for­tu­nate that he had sons and plen­ty of male friends.

He and I don’t talk about dying or death, per­haps because I don’t want him to tell me that he’d rather be dead, as he has told some of his friends. I don’t always tell him what doc­tors have told me, and I may not show him this account of our cur­rent lives. That is prob­a­bly dis­hon­est and cow­ard­ly of me, but he’s not all that inter­est­ed in the progress of his ill­ness and is usu­al­ly hap­py to down a clutch of pills or a spoon­ful of mor­phine with­out ask­ing what he’s con­sum­ing or why. Can­cer often trav­els mys­te­ri­ous­ly and invis­i­bly, and Karl has always been more exer­cised by his crip­pling arthrit­ic pains, which are now pret­ty well mor­phine-assuaged. I some­times feel that his deaf­ness has affect­ed our lives togeth­er more than all his oth­er trou­bles. I deal cross­ly with demands to ​“speak up” and then ​“don’t shout” and respond rather wood­en­ly to Karl’s end­less­ly inven­tive mis­hear­ings of what I actu­al­ly say to him.

I think we are all trea­sur­ing this long, strange end of a life and our part in it, and we cheer up when there are small improve­ments, minia­ture plea­sures, mem­o­rably fun­ny moments. We’ve all slipped into new roles and had time to adapt to them. I sus­pect we’re much luck­i­er than peo­ple whom death takes by sur­prise. But I won­der whether all this isn’t an indul­gence for us, but unbear­able for Karl. If it is, he’s even more sto­ical than he seems.

Jane Miller lives in Lon­don, and is the author, most recent­ly, of In My Own Time: Thoughts and After­thoughts (2016), a col­lec­tion of her In These Times columns and interviews.
Have thoughts or reactions to this or any other piece that you'd like to share? Send us a note with the Letter to the Editor form.
More articles by Jane Miller
Culture
Want Better Sex? Try Socialism.
In "Why Women Have Better Sex Under Socialism," Kristen R. Ghodsee argues that economic independence for women not only helps all of society—it improves heterosexual relationships too.
Feature
Jeremy Corbyn Spent Passover With a Group of Socialist Jews. Here’s Why I’m Not Insulted.
How dare the world decide for us who's a proper Jew.
Culture
Barbara Ehrenreich Calls BS on the Immortality Industry
In her new book, Natural Causes, the author reminds us that we can't cheat death -- although we can die trying.
Similar articles
Culture
Your White Neighbor’s “Black Lives Matter” Yard Sign Is Not Enough
Being anti-racist means making places safe for Black people to inhabit. Without that, BLM yard signs are just performative allyship.
Shayla Lawson
Culture
How Capitalism Turned Women Into Witches
Sylvia Federici’s new book explains how violence against women was a necessary precondition for capitalism.
Sady Doyle
Culture
A Brief Case for Cancelling All Student Loan Debt
It isn’t just the right thing to do—it’s smart economics.
In These Times Editors
Subscribe to our free newsletter
Fearless journalism that speaks truth to power
Limited Time: