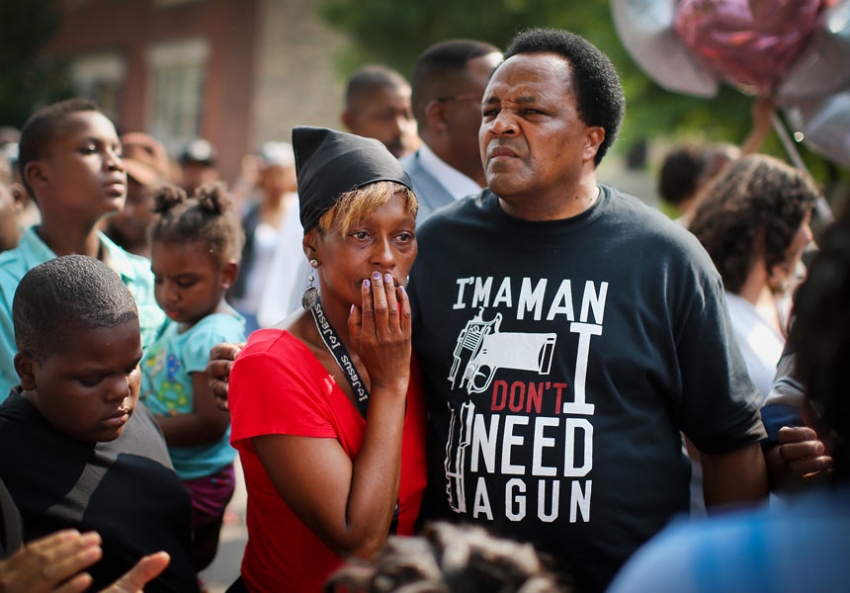 During a memorial service on July 20 in Chicago, Audry Miller mourns granddaughter Shamiya Adams, 11, who was killed by a stray bullet. (Photo by Scott Olson/Getty Images)

Chicago did suffer 516 murders in 2012, the highest number of any city in the country. But when adjusted for population, Chicago’s murder rate is lower than those of Detroit, New Orleans, St. Louis, Baltimore, Newark, Oakland and Cleveland.

Chicago’s astounding weekend body counts make headlines around the globe: On the July 4 weekend, 82 people were shot, 14 of them killed. “Killed on the Fourth of July: 14 dead as Chicago descends into bloody chaos” was how the UK’s Daily Mail put it. Domestic depictions were only slightly more subtle.

The media are awash with recommendations and formulae on how best to banish violent crime from this apparently besieged city. As the host of a radio show that concentrates on issues that affect black Chicago—the demographic most afflicted by the problem—I often wind up in a vortex of contending opinions, implored to consider solutions ranging from instituting martial law to imposing socialism on the city.

To help sharpen my focus, I checked in with Jamal Foster, a young black man I consulted three years ago, when he was 17, for a story on Chicago’s flash mobs. I wanted his opinion on criminal violence in Chicago, or “Chiraq,” as he and his friends call the city.

Jamal, now 20, lives in Fuller Park, a community that ranks high in the city’s crime statistics and has the second-highest poverty rate. He has a part-time job working as a handyman with his uncle at a tire-repair shop. Jamal says he still dabbles in the kind of petty crime often taken for granted in neighborhoods like his, but he’s managed to avoid the incarceration trap that has ensnared so many of his peers. Only two of his many friends from elementary school are still alive and one of them is incarcerated. He says, “I probably ain’t gon’ be around too long myself.”

His sense of fatalism, unfortunately, is justified. One in three black men is likely to be imprisoned in their lifetime. Black men are the primary victims of homicide (as well as the perpetrators). According to the Chicago Tribune, African Americans have made up more than 70 percent of the city’s homicide victims every year except one for the last two decades. Ninety percent of Chicago’s homicide victims are men.

Chronic poverty has so limited their options that many of Jamal’s peers see little reason to aspire even to a quotidian life, much less the American Dream. The contours of their social context are marked by their celebrations; in many parts of West and East Garfield Park, North Lawndale, Englewood and Austin, prison release and post-funeral parties are the most festive occasions.

Like many young black Chicagoans I talk to, Jamal dismisses the notion that disputes over drug turf or gang wars are the major causes of the violence.

“This mayhem ain’t really no gang thing. Ain’t no real gangs left,” he explains. “All this Chiraq shit is just niggas getting mad about being dissed or gettin’ at other niggas for retaliation.”

Jamal says that usually the beefs that escalate into serious violence are sparked by interpersonal insults or are retaliation for previous violence. The stress of living with an insistent lack of resources serves as the powder keg. He explains that the absence of a gang structure actually exacerbates the violence by giving too much significance to personal beefs and allowing too much freelance retaliation.

In the media, Chicago is depicted as the nation’s “murder capital.” But that title pushes the truth. The city did suffer 516 murders in 2012, the highest number of any city in the country. But when adjusted for population, Chicago’s murder rate is lower than those of Detroit, New Orleans, St. Louis, Baltimore, Newark, Oakland and Cleveland.

Jamal is utilitarian in his assessment of Chicago’s distorted media image. “Most of my peoples like this Chiraq rep,” he notes. The music he rocks celebrates the city’s outlaw status. Hip-hop artists from Chicago are gaining national exposure because of the city’s infamy—an entire sub-genre of hip-hop, “drill” music, is based on the grim tales of life in Chiraq’s killing zones.

Media infamy may be a perverse reason for community pride, but life in Chicago’s abandoned communities has long been a lesson in perversity; generations lacking resources, desperately making the best of the worst. Jamal and his peers were shaped by this stress. Communities that allay this desperation provide better molds for youth, but less eye-catching headlines than those that feature “Chiraq.”