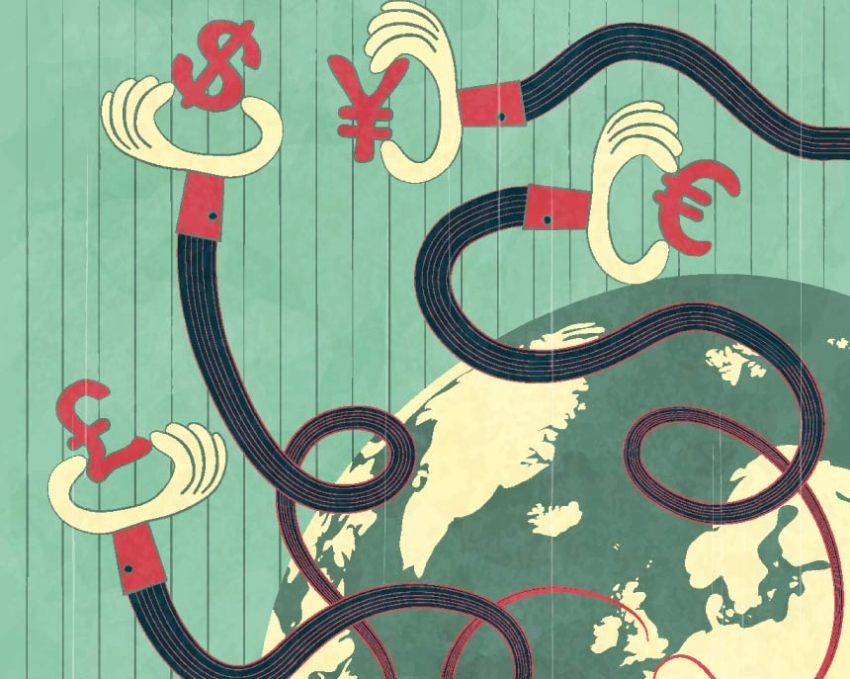 What Happens in Geneva…

'It is astounding that at a time when we are still reeling from the devastating consequences of reckless financial deregulation, our governments are negotiating further deregulation of the financial sector, solely in the interests of large financial corporations.'

Most progressives are, by now, familiar with the Trans-Pacific Partnership (TPP), the proposed trade deal that would link the United States with Pacific Rim powerhouses like Australia and Japan. Wonkier corners of the left are equally conversant in the intrigue of the Transatlantic Trade and Investment Partnership (TTIP), a pact that would couple the United States and the European Union. Like-minded critics would do well by memorizing yet another trade acronym: TISA, or the Trade in Services Agreement. Judging by the stakes and the ultra-secrecy of the negotiations, it could easily be the worst of the bunch.

Here's what we know: Fifty countries, including the United States, the EU nations, Australia, Canada, Hong Kong, Japan, Switzerland, Taiwan, and Turkey, have been in TISA talks since 2012. The resulting agreement will set the terms for almost 70 percent of global trade in “services”: everything from banking and construction to telecom and tourism.

The public got its first glimpse of the treaty on June 19, when WikiLeaks published a draft of the agreement's chapter on financial services. It wasn't pretty. The text included proposals to extend new “market access” guarantees to all participating states and fresh limits on the ability of nations to “discriminate” against foreign financial firms. The section hasn't been finalized, but the leak confirmed what TISA skeptics feared the United States and EU are leading the charge to block countries from imposing domestic regulations on the multi-trillion-dollar industry.

“It is astounding that at a time when we are still reeling from the devastating consequences of reckless financial deregulation, our governments are negotiating further deregulation of the financial sector, solely in the interests of large financial corporations,” says Daniel Bertossa, senior policy and advocacy officer at Public Services International (PSI), a global public-sector union federation based in France.

As of yet, that leaked chapter is the only piece of the agreement to go public. In contrast to the TPP or TTIP, U.S. officials have not disclosed the dates or locations of talks ahead of time. (The secretive banking hub of Geneva has hosted all seven rounds.)

“You only have to wonder what’s in there, if they’re so afraid of citizens and civil society and workers to actually see what they’re negotiating,” says Melinda St. Louis, international campaigns director with Public Citizen’s Global Trade Watch, a watchdog group.

On top of that, unlike TTP and TTIP negotiators, TISA negotiators have avoided hosting any public “stakeholder engagement” events—open forums during negotiations for interested parties to comment on the deal. “They’re not even trying,” says St. Louis.

“They’re not even putting window dressing on this.”

“The secrecy,” says Bertossa of PSI, “is, in many ways, an attempt to avoid public scrutiny that would inevitably be against some of these provisions.”

That may well be true. In the case of the TPP, along with public awareness has come opposition. As grassroots groups have hit the streets, rallied online and barraged legislators with petitions, a bipartisan voting bloc in Congress has managed—at least, for now—to put the brakes on the Obama administration’s attempt to “fast track” the bill.

There’s arguably even more at stake in TISA than in the TPP or TTIP.

TISA was born from the ashes of the World Trade Organization (WTO)’s “Doha Development Round,” multilateral trade negotiations that have essentially stalled, despite much fanfare over their 2001 launch. During these talks, the United States, EU and their allies have repeatedly failed to earn strong liberalization commitments in the service sector from the BRICS (Brazil, Russia, India, China, South Africa) and other developing countries. Eventually, a frustrated pack of countries calling themselves the “Really Good Friends of Services”—dominated by the United States and EU— decided to launch their own talks in 2012, outside the WTO framework.

In the highly diplomatic realm of international trade negotiations, this gesture was tantamount to flipping off the Global South.

“The United States and EU decided to basically create a coalition of the willing,” explains St. Louis, “saying, ‘If we can’t get our extreme services deregulation agenda through the WTO framework because of this opposition we’re coming up against … then we’re going to go on our own. Who’s with us?’ ”

TISA’s long game, some worry, is to nudge the full WTO into adopting whatever ultra-corporate agreement emerges.

It’s hard to guess what will appear in the final deal, thanks to the extreme secrecy. But public interest and labor groups have been able to glean some details. One major concern is the inclusion of so-called “standstill” and “ratchet” obligations: clauses that aim to lock in existing levels of service-sector liberalization among participating nations. In practical terms, these provisions discourage steps to enhance public-sector—and thus, democratic— participation in the economy. For example, if Panama were to commit its water services to TISA, and a Panamanian city then took control of a water service provider owned by a U.S. company, the United States could challenge Panama before an international tribunal for violating TISA. Unlike TPP or TTIP, TISA reportedly will not provide access to international tribunals where corporations themselves can directly sue governments (known as investor-state dispute settlement (ISDS) courts). But that’s not as comforting as it might sound—companies that are peeved by a foreign state making profit-threatening moves in their sector simply have to pressure their own governments to take action on their behalf.

An individual foreign service provider that feels that it’s inappropriately had a contract canceled or been locked out of a bid, even without ISDS, could go to its own government and seek redress and have that government pursue dialogue and consultations and eventually state-to-state dispute settlement,” says Celeste Drake, a trade and globalization policy specialist at the AFL-CIO. “That opportunity in itself could have the effect of keeping more services in the private sector.”

As the ultra-secret talks roll on in Geneva, activists are slowly starting to raise awareness. Public Services International has done much of the work. But PSI and allies face a not-so-subtle resource problem: NGOs, watchdogs and trade policy experts from organized labor are already stretched thin monitoring the TPP and the TTIP.

The alarm, really, has yet to be sounded.

“I don’t think that this opposition has reached the average person on the street,” says Yorgos Altintzis, policy officer at the International Trade Union Confederation. “The vast majority of our society has no idea.”