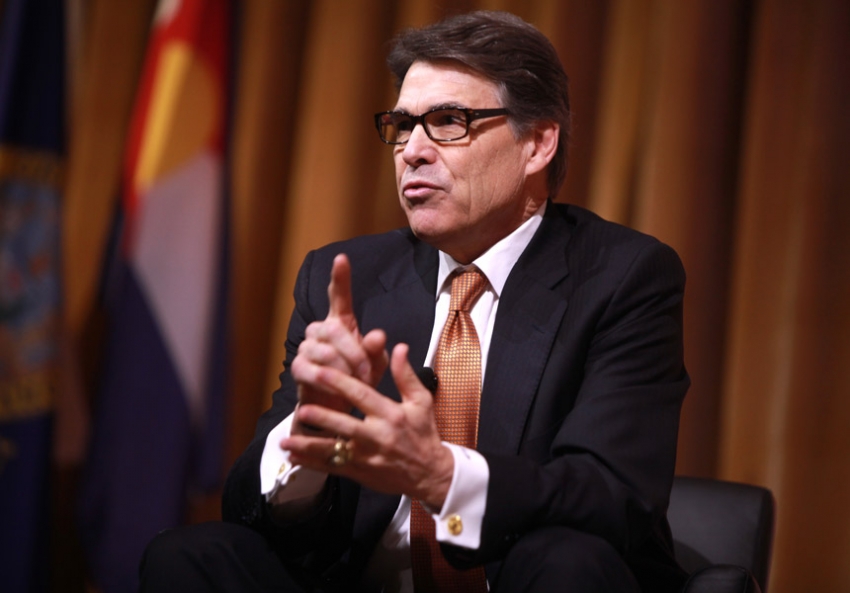 As the governor of Texas, Rick Perry is currently banned from raising campaign money from Wall Street executives managing his state's pension funds. But if the GOP has its way, that won't be the case for long. (Kate Spalla / Flickr / Creative Commons)

Whose Presidential Campaign Will Your Pension Finance?

Republicans are arguing that Wall Street should have the right to influence politicians’ investment decisions.

Securities and Exchange Commission (SEC) regulators originally passed the rule to make sure retirees' money wasn't being handed out based on politicians' desire to pay back their campaign donors.

Wall Street is one of the biggest sources of funding for presidential campaigns, and many of the Republican Party's potential 2016 contenders are governors, from Chris Christie of New Jersey and Rick Perry of Texas to Bobby Jindal of Louisiana and Scott Walker of Wisconsin. And so, last week, the GOP filed a federal lawsuit aimed at overturning the pay-to-play law that bars those governors from raising campaign money from Wall Street executives who manage their states' pension funds.

In the case, New York and Tennessee's Republican parties are represented by two former Bush administration officials, one of whose firms just won the Supreme Court case invalidating campaign contribution limits on large donors. In their complaint, the parties argue that people managing state pension money have a First Amendment right to make large donations to state officials who award those lucrative money management contracts.

With the $3 trillion public pension system controlled by elected officials now generating billions of dollars worth of annual management fees for Wall Street, Securities and Exchange Commission (SEC) regulators originally passed the rule to make sure retirees' money wasn't being handed out based on politicians' desire to pay back their campaign donors.

In the complaint aiming to overturn that rule, the GOP plaintiffs argue that the SEC does not have the campaign finance expertise to properly enforce the rule. The complaint further argues that the rule itself creates an “impermissible choice” between “exercising a First Amendment right and retaining the ability to engage in professional activities.” The existing rule could limit governors' ability to raise money from Wall Street in any presidential race.

In an interview with Bloomberg Businessweek, a spokesman for one of the Republican plaintiffs suggested that in order to compete for campaign resources, his party's elected officials need to be able to raise money from the Wall Street managers who receive contracts from those officials.

“We see (the current SEC rule) as something that has been a great detriment to our ability to help out candidates,” said Jason Weingarten of the Republican Party of New York—the state whose pay-to-play pension scandal in 2010 originally prompted the SEC rule.

The suit comes only a few weeks after the SEC issued its first fines under the rule—against a firm whose executives made campaign donations to Pennsylvania Gov. Tom Corbett, a Republican, and Philadelphia Mayor Michael Nutter, a Democrat. The company in question was managing Pennsylvania and Philadelphia pension money. In a statement on that case, the SEC promised more enforcement of the pay-to-play rule in the future.

“We will use all available enforcement tools to ensure that public pension funds are protected from any potential corrupting influences,” said Andrew Ceresney, director of the SEC Enforcement Division. “As we have done with broker-dealers, we will hold investment advisers strictly liable for pay-to-play violations.”

The GOP lawsuit aims to stop that promise from becoming a reality. In predicating that suit on a First Amendment argument, those Republicans are forwarding a disturbing legal theory: Essentially, they are arguing that Wall Street has a constitutional right to influence politicians and the investment decisions those politicians make on behalf of pensioners.

If that theory is upheld by the courts, it will no doubt help Republican presidential candidates raise lots of financial-industry cash—but it could also mean that public pension contracts will now be for sale to the highest bidder.