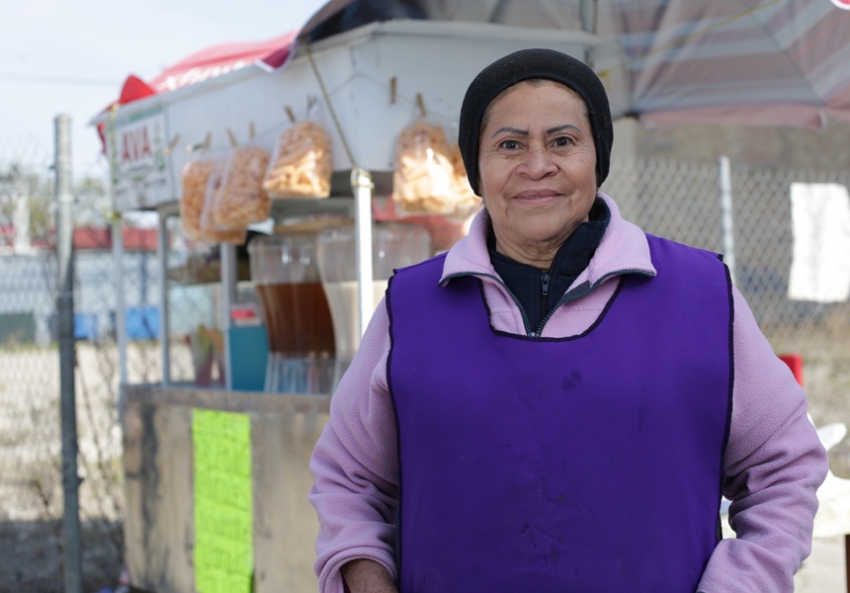 A vendor at work on the streets of Chicago. (Courtesy of the Street Vendors Alliance)

Street vendors must skirt the law to make a living.

One day last year, as she was handing tamales to a customer, a police officer grabbed them, threw them back at her and threatened to arrest her if she continued to sell on 26th street.

Each afternoon in Chicago’s Little Village neighborhood, 70-year-old Cuala resumes her quiet game of cat-and-mouse with police. After spending a few hours openly hawking cool drinks or hot chocolates from a cart, the street vendor (who declined to give her last name because of legal concerns) stocks an unmarked cooler with tamales, making furtive lunch sales to customers in the know. The stealth tactic reduces her profits, but lessens the chance that she will be arrested and ticketed: While the sale of drinks and packaged desserts is legal, street vendors like Cuala are prohibited from selling prepared foods in Chicago.

Though carts offering tamales, elotes, cut fruit and other treats are a common sight on Chicago streets, the Windy City is one of the few major metropolises that won’t grant such vendors business licenses, citing the difficulty of regulation and potential health concerns. As a result, street vendors, many of whom are poor immigrants, are subject to harassment from police, arrest and punishing fines of up to $1,000.

Some, like Cuala, resort to subterfuge; others vend only in the early morning, when police officers known for targeting vendors aren’t on the beat; others dash off the street whenever a police car approaches.

Whatever the strategy, the result is the same: Vendors, many of whom have already been shut out of the formal economy because of their age, childcare responsibilities, language barriers or immigration status, are forced to remain in the shadows. Street vendors and their advocates say that the ongoing threat of arrest represents a major barrier to growing vending businesses enough to make a decent living. It also takes a psychological toll on vendors.

Cuala once worked temporary jobs, but can no longer get hired: “They don’t want anybody old,” she says. She began selling tamales seven years ago. But one day last year, as she was handing tamales to a customer, a police officer grabbed them, threw them back at her and threatened to arrest her if she continued to sell on 26th street, the bustling thoroughfare that runs through Little Village.

Since then, Cuala has been in “constant fear” when police pass by and sells her tamales more surreptitiously. But her new strategy can yield as little as $80 each day, she says, whereas when she sold in the open, she made up to $200. The result, she says, is that it’s now impossible to save money, and she and two adult nephews whom she lives with must get by “day by day.”

All this could change soon. Arguing that street vending is an inextricable part of the fabric of city life, a coalition of vendors, labor activists and community groups are advocating a City Council ordinance that would legalize vending.

The law would allow vendors to register their businesses and operate in the open. In return, they would be required to cook in a city-inspected kitchen, rather than in their homes or on the street. Street vendors were initially included in the ordinance that legalized food trucks in Chicago two years ago, but were dropped from the final version. The move that disappointed advocates who hoped to see vendors granted the same rights as their food-truck brethren, who often have greater access to start-up capital and cater to a wealthier clientele.

But the street vendor coalition eventually authored its own ordinance, which was introduced by 26th ward Alderman Roberto Maldonado in May. The City Council’s license and consumer protection committee is now studying it, and advocates hope to coordinate a major push for passage this fall.

However, the proposal could face opposition from the restaurant industry, warns Beth Kregor, director of the University of Chicago Law School’s Institute for Justice Clinic on Entrepreneurship, which helped draft the ordinance. There’s a history, she explains, of antagonism towards street vending from brick-and-mortar businesses that believe that it will eat into their profits or that the presence of vendors will decrease the “desirability” of city streets. Such business interests often hold considerable sway with local politicians.

But Kregor is hopeful that City Council members will recognize the proposed ordinance as “a great way to allow people in our city who have great ideas and great recipes—but a small budget—to earn a living.”

Street vendors can also increase the availability of fresh food in low-income neighborhoods, she says. “It’s kind of perverse in this city that we worry about peoples’ access to healthy foods, and then we ban people … from selling soup on a cart in neighborhoods where there aren’t grocery stores.”

Activists in Los Angeles, the only other major city that outlaws street vending, are currently in the midst of a similar fight for an ordinance that would legalize vending and allow vendors to come out of the shadows.

But the experiences of vendors in cities such as New York show that legalization is just the beginning of the fight.

According to the Street Vendor Project (SVP), an New York-based membership and advocacy organization, vendors still face a host of issues, including confusing regulations that lead to onerous tickets and fines, ongoing police harassment and attempts to pass ordinances excluding vendors from operating in certain wealthy neighborhoods.

One example of police harassment is the ticketing of children who are helping to tend their families’ carts. “I got my first ticket [for vending without a license] when I was 11 years old,” recalls Clementina, a member of the New York City street vendor organization Vamos Unidos, in a video distributed by the organization. “One of our youth even got arrested for taking care of their parents’ business.”

SVP and other community organizations in New York also say that immigrant vendors are still profiled and singled out for tickets and fines. For this reason, many organizers see the fight for fair treatment of street vendors as part and parcel of broader ones for police accountability and immigrant justice. Many vendors are also undocumented, and thereby find themselves criminalized twice over. Though Chicago and Los Angeles are both ostensibly “sanctuary cities” where local policy discourages police from calling in immigration authorities, vendors say that certain police regularly threaten to do so, nonetheless.

In Chicago, as well, legalization alone is unlikely to remove all barriers preventing immigrant and low-income vendors from making a decent living. In particular, the ordinance’s stipulation that vendors must cook in certified kitchens could prove an onerous requirement for many poor vendors, given the paucity and expense of such kitchens.

The Street Vendors’ Association (Asociacion de Vendedores Ambulantes, or AVA) hopes to partner with churches and other community organizations to make more kitchens available to the some 1,500 vendors across the city. Eventually, explains AVA Vice President Vicky Lugo, the association wants to buy or gain access to kitchens for vendors to run cooperatively. One such cooperative is in the works in Little Village, where an AVA member has purchased a closed-down restaurant.

Cuala, who recently became a member of AVA, hopes that passage of the street vendor ordinance would allow her to grow her business and begin saving money again. Most importantly, however, she hopes that she and other vendors will finally be able to sell on the streets “without fear.”

In These Times coverage of street vendors is part of Street Food: Meet the People Who Make It, a partnership with Feet in 2 Worlds and Oakland Local. This story was made possible in part by The Media Consortium and the Voqal Fund.