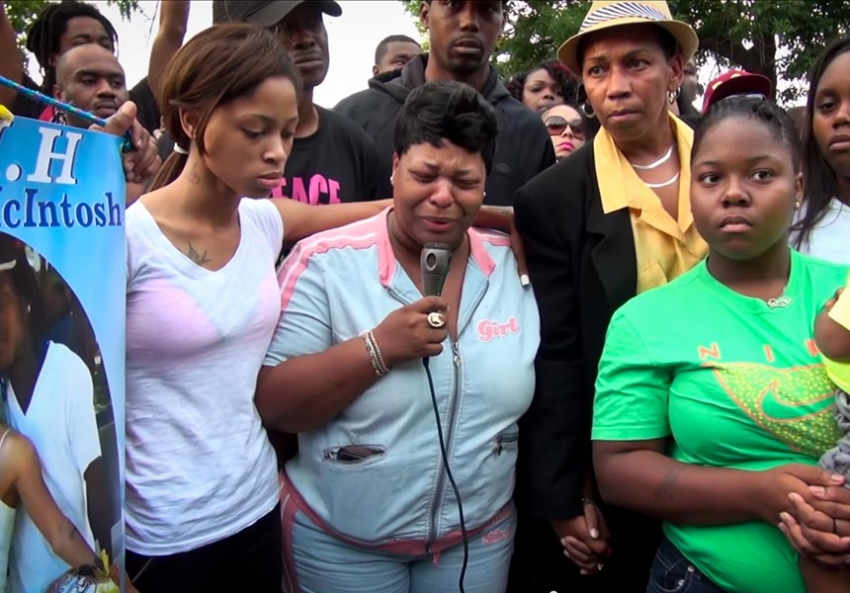 An August 27 rally for Roshad McIntosh, who was gunned down by Chicago police. (Nader Awad/Via Youtube)

Youth stand up to police violence.

'[Ferguson] is a wakeup call,' said Chapman. 'Our country is quickly morphing into a police state—unless we do something about it.'

The spontaneous uprising in Ferguson over the killing of 18-year-old Michael Brown has cast the national spotlight on racially charged police violence, a slower-burning but increasingly potent movement has been building in Chicago. Young activists and veteran organizers are working to demand accountability and justice for communities that routinely endure violence and harassment at the hands of the city’s police force.

In late August and early September, hundreds of people marched in a series of protests on the West Side against the fatal police shooting of 19-year-old Roshad McIntosh. As in Ferguson, community members are demanding the department release the name of the officer who shot McIntosh. Police say McIntosh pointed a gun at officers; community members have said he was unarmed and on his knees when he was killed.

Chicago has a long history of struggles between communities and police, from union members who fought with police in the 1800s to the Black Panthers in the 1960s to the 1990s-2000s movement against police torture—namely the alleged systematic use of electric shocks, beatings and other brutality to obtain confessions under former Police Commander Jon Burge. Burge is now in prison, serving a four-and-a-half-year sentence for perjury and obstruction. But police brutality, misconduct and shootings continue to make headlines and roil communities in Chicago.

In late August, for example, prosecutors brought charges against a West Side police commander accused of shoving a gun down a man’s throat, holding a Taser to his groin and threatening to kill him during an incident in 2013. A lawsuit filed this spring involved officers videotaped beating and threatening a handcuffed, diminutive woman who managed a tanning salon being raided over prostitution allegations.

A Chicago Reporter analysis found that black people are 10 times more likely than white people to be shot by police in the city. This year, over the Fourth of July weekend alone, at least five people were shot by police, two of them fatally, in separate incidents.

Such situations have fueled a growing movement around police behavior in Chicago that began even before the uprising in Ferguson. In May, the city hosted activists from New York City, Austin, Louisville, Los Angeles, San Francisco and other cities for the National Forum on Police Crimes, organizing to fight police violence, racial profiling, the incarceration epidemic and related issues. The keynote speaker was Angela Davis—the scholar, activist and writer who in 1970 landed on the FBI’s Ten Most Wanted List for her alleged involvement in the killing of a judge during a shootout in northern California, only to be acquitted later of all charges.

Speaking with In These Times, Davis framed police repression as a consequence of worldwide shifts toward neoliberal and austerity policies, of which Chicago has been a poster child. “The emergence of global capitalism in the ’80s and its subsequent destruction of social services and the welfare state have created the most fertile kind of ground for police violence,” Davis said. “In light of the dismantling of these services, it is police and the prison system that are left to address these populations affected by deindustrialization [and the] removal of jobs to other parts of the world.”

The forum was hosted by the Chicago Alliance Against Racist and Political Repression (CAARPR), an affiliate of the National Alliance Against Racist and Political Repression, which was founded 41 years ago as part of the movement to free Davis and other political prisoners. One of those political prisoners, Frank Chapman, served as the executive director of the national alliance for a decade and relocated to Chicago in 2011 to organize a reinvigorated national campaign.

Chapman tied the lack of amenities and resources on the South and West Sides to the conditions that lead to police harassment and violent confrontations.  “Young people need recreation, they need jobs,” Chapman told In These Times. “We as a society have a responsibility—we’re not measuring up. Our solution to the social unrest is police repression.”

While long-time organizers like Chapman provide a link to the past, youth are largely taking the lead in the Chicago movement against police violence. Several youth-driven groups are pushing for more police accountability, including Project NIA, We Charge Genocide and the L.Y.R.I.C. SQUAD (Let Your Rhymes Inspire Creativity).

On August 2, We Charge Genocide—an all-volunteer organization that takes its name from a 1951 petition to the United Nations documenting policeviolence—hosted a forum in downtown Chicago for youth to testify about incidents where they felt they were racially profiled or mistreated by police. One after another, young Black and Latino men and women took to the microphone to describe situations where they were pulled over, searched, questioned, harassed, arrested and even beaten.

One young man described being beaten by an officer after he attempted to evade police. After “lighting up a blunt” while in a car with his girlfriend, he saw a squad car turn on its lights and siren to pull him over. Knowing he had an outstanding warrant, he jumped out of the car and ran, he said, but he turned himself in to an officer half an hour later. That’s when, he said, an officer gave him a beating so bad that he ended up needing 22 stitches in his face.

“I still can’t talk right to this day. I can’t eat certain things, I had a nasal fracture. They had to stitch my tongue back together,” he said.

Even police encounters with less dramatic outcomes cause trauma. One young woman recalled the fear she felt when she and some friends were pulled over while driving on the University of Chicago campus. The officer claimed he smelled marijuana, and searched the car. “I felt helpless, my heart just pounding,” said the young woman. The search uncovered nothing illegal, but “afterwards everyone was quiet. The whole mood had changed,” she said. “So many times people in our community deal with that on a daily basis.”

We Charge Genocide and other groups are training youth to record instances of police misconduct and share them on Twitter under the hashtag #chicopwatch.

On August 13, an ensemble of young, mostly Black and Latino actors captivated the crowd packed tightly into Chicago’s Free Street Theater with their dramatic slow-motion performance about the death of Deonta Dewight Mackey, a 16-year-old fatally shot by police at a Chicago gas station last February after he tried to rob an off-duty officer at gunpoint. The actors were the Young Fugitives, a performance ensemble directed by Ricardo Gamboa that gained much attention last year for its production “Cold Summer,” about Chicago violence and the closing of public schools.

The group’s performance about Mackey’s death is in the workshopping stages and will debut in January, a few weeks before the anniversary of the incident.

While different groups raise awareness in different ways, a main focus for CAARPR is pushing to institute an elected civilian police review board with the power to launch investigations and spark prosecutions. The group has collected about 10,000 signatures on a petition calling for a city ordinance that would create the board, and on August 27, CAARPR submitted a letter to both the U.S. Attorney in Chicago and U.S. Attorney General Eric Holder detailing specific incidents of alleged police abuse. Nearly 50 people went to the U.S. Attorney’s Office to deliver the letter, including victims of police torture and family members of people killed by police.

The U.S. Attorney’s Office seems to be feeling the pressure. In late August, a Chicago lawyer who specializes in representing police officers reportedly sent a memo to the president of Chicago’s police union alerting him that “it has come to my attention that the FBI and  U.S. Attorney’s Office are investigating certain police-involved shootings, specifically ones in which an offender’s gun was not recovered.”

Thanks to a lawsuit by journalist Jamie Kalven, Chicagoans can now get more information about police misconduct. In March, an Illinois appellate court ruled in Kalven’s lawsuit that complaints against police officers may be obtained under the Freedom of Information Act (FOIA). Kalven and his allies have filed and received responses for an initial round of FOIA requests, and they are urging others to do the same, calling it a powerful way to demand accountability from the department.

Chapman said that when it comes to relations between police and communities of color, “many people have been in a coma.” But he believes that the events in Ferguson have lit a fire under the burgeoning movement in Chicago and other cities.

“[Ferguson] is a wakeup call,” said Chapman. “Our country is quickly morphing into a police state—unless we do something about it.”