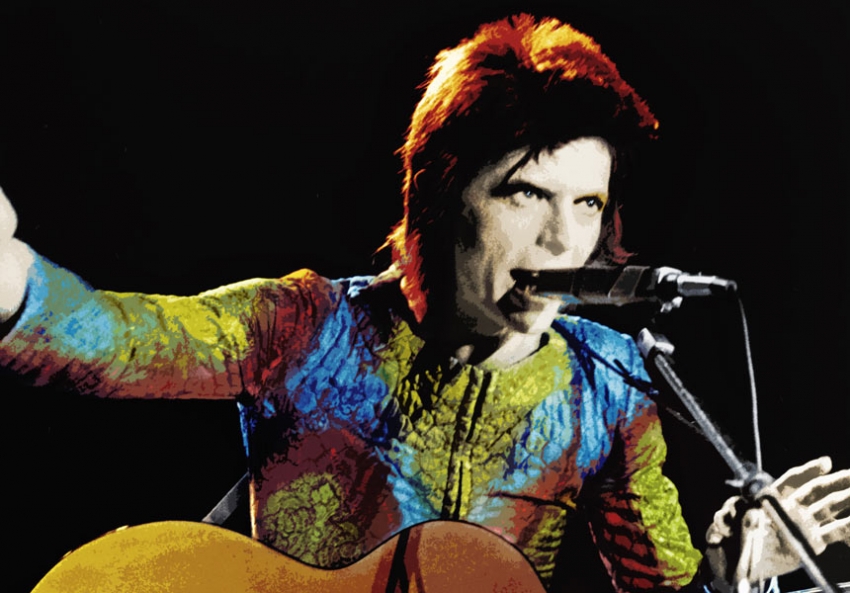 Critchley finds something important in Bowie’s costumes and alien characters: permission to do something other than grow up in suburbia and get a 9-to-5 job.

Philosopher Simon Critchley starts off his new book, Bowie, by introducing us to David Bowie the way he discovered him: July 6, 1972, on the BBC’s “Top of the Pops,” in a catsuit with spiked orange hair and makeup, singing a song about a man come down from the stars. Critchley was 12. Later, his mother bought the single they had heard, “Starman,” and when he played it the first time, “the sheer bodily excitement of that noise was almost too much to bear.”

Bowie, now 67, has put out 26 studio albums, jumpstarted (and killed) genres, and shaped the course of rock ‘n’ roll. His first album came out in 1967; his latest, after a 10-year hiatus, was released in 2013. It is impossible to say how many artists he’s influenced. When rock was dominated by masculine swagger in the 1970s, Bowie shattered a generation’s ideas about gender and sexuality, first by performing in long hair and dresses, then in character as the alien messenger Ziggy Stardust, in glitter stage makeup and that famous orange hair—not to mention a signature move onstage where he’d simulate fellatio on bandmate Mick Ronson’s guitar.

Critchley finds something important in Bowie’s costumes and alien characters: permission to do something other than grow up in suburbia and get a 9-to-5 job. “There is a world of people,” Critchley writes, “for whom Bowie was the being who permitted a powerful emotional connection and freed them to become some other kind of self, something freer, more queer, more honest, more open, and more exciting.”

Many critics (Lester Bangs, for instance) have made the mistake of reading Bowie as all image—a chameleon with no substance. But Critchley, who teaches philosophy at the New School of Social Research in New York and has written books on subjectivity and “the ethics of deconstruction,” is explicitly opposed to the idea of rock “authenticity.” Even the structure of Bowie—an eclectic little pocket-sized volume of short essays, illustrated with sketches by Eric Hanson, and interwoven with stories from Critchley’s life and with meditations on art, music, identity, and life itself—argues against narrative unity or a stable identity. “Art’s filthy lesson is inauthenticity all the way down, a series of repetitions and reenactments: fakes that strip away the illusion of reality in which we live and confront us with the reality of illusion,” Critchley writes.

Embracing that “reality of illusion” allows us to find freedom and pleasure in trying on different identities and casting them off when they no longer fit. “Just as Bowie seemingly reinvented himself without limits,” Critchley writes, “he allowed us to believe that our own capacity for changes was limitless.”

Arguably, this capacity for change goes beyond just the individual, though reading Bowie’s lyrics for an explicit political message is likely to frustrate the literal-minded leftist. The artist has long favored the poetic over the polemic, and Critchley is right in observing that Bowie’s lyrics are “at their strongest when they are most oblique.” In “Life on Mars?”, a haunting track from the 1971 record Hunky Dory, Bowie sings, “It’s on America’s tortured brow/That Mickey Mouse has grown up a cow/Now the workers have struck for fame/’Cause Lennon’s on sale again.” We might read this as a commentary on fame or a critique of American consumerism or, if so inclined, evidence of Bowie’s hidden labor politics. What we can’t do is say for sure what it means, yet its collection of arresting imagery hints at something big beneath the surface.

In Bowie, Critchley, similarly, is less interested in making an explicit argument than in writing something beautiful. And yet Critchley’s reading of Bowie's work does argue for finding radicalism there. “Just for an instant, for the duration of a song, a seemingly silly, simple, puerile pop song, we can decreate all that is creaturely (or Critchley) about us,” Critchley writes, “and imagine some other way of existing, something utopian.”

In part, it is Bowie’s fascination with dystopias that helps bridge the personal and political, taking us from glitter makeup to utopian imaginings. His post-apocalyptic landscapes capture the deeply human fears beneath the specific paranoias of different ages; Bowie instills a human longing, Critchley notes, into something big and terrifying, searching for love as the world crumbles. His dystopias still seem well-suited to our present moment, when it feels like everything is falling apart. “Five Years,” a song about the countdown to the end of the world, seems to echo the relentless tick of climate change; “Diamond Dogs,” with its description of shattered glass and broken buildings, summons up the deindustrialized cities where a job is a dream long dead.

But in imagining the end of everything, Bowie opens up a space to conceive of something radically different. If, as Fredric Jameson famously said, it is easier to imagine the end of the world than to imagine the end of capitalism, what can we imagine if we push past the end of the world? Bowie’s multiplicity of characters and worlds, his offering up of not just one alternative, but many, makes the few, circumscribed choices we’re offered seem woefully inadequate. In change, alienation and even destruction, we discover our infinite potential for creation.