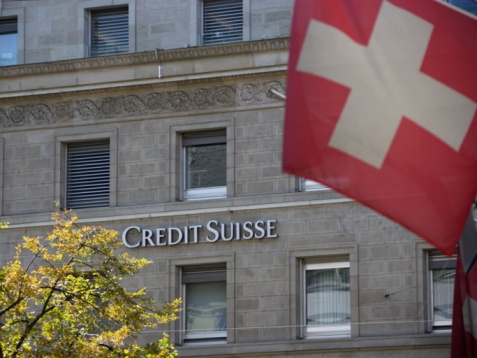 Is Obama Going Easy On Banks That Break the Law?

Credit Suisse employees have donated more than $376,000 to President Obama—is he repaying the favor?

A few months ago, in a press conference about the felony conviction of Credit Suisse, Attorney General Eric Holder said, “This case shows that no financial institution, no matter its size or global reach, is above the law.”

In its announcement outlining the waiver, the Department of Labor notes that Credit Suisse “operated an illegal cross-border banking business that knowingly and willfully aided and assisted thousands of U.S. clients in opening and maintaining undeclared accounts” and in “using sham entities” to hide money.

Under existing Department of Labor rules, the conviction could prevent Credit Suisse from being designated a Qualified Professional Asset Manager. That designation exempts firms from other federal laws, giving them the special status required to do business with many pension funds. The Obama administration is proposing to waive those anti-criminal sanctions against Credit Suisse, thereby allowing Credit Suisse to get the QPAM designation needed to continue its pension business.

The waiver proposal follows a larger pattern. In June, Bloomberg News reported that federal prosecutors have successfully pushed U.S. government agencies to allow Credit Suisse to avoid many regulatory sanctions that could have accompanied its criminal conviction.

“The New York Fed said last month that the bank can continue handling government securities as a so-called primary dealer,” reported the news service. “The SEC let the firm continue as an investment adviser while the agency considers a permanent waiver.”

Pensions and Investments magazine has reported that despite Department of Labor assurances of tough enforcement of its sanctions against convicted financial firms, the agency has “granted waivers for all 23 firms seeking individual waivers since 1997.”

Critics say that by using such maneuvers, the Obama administration is effectively cementing a “too big to punish” doctrine. That criticism intensified in 2012 and 2013, when top Justice Department officials defended the administration's reluctance to prosecute banks by publicly declaring that the government considers the potential economic impact of such prosecutions. Those declarations echoed an earlier memo by Attorney General Eric Holder, which stated that officials could take into account “collateral consequences” when deciding whether to prosecute major corporations.

The Federal Register announcement, for instance, notes that Credit Suisse has assets of nearly $1 trillion, and argues that if the anti-criminal provisions were enforced, the bank would lose its ability to offer investment products to pension funds. The announcement also argues that the Credit Suisse entities that specifically conduct pension business “are independent of” and “not influenced by Credit Suisse AG’s management and business activities.”

What the administration did not mention, of course, is that according to data compiled by the Sunlight Foundation, employees of Credit Suisse have given President Obama's campaigns more than $376,000. That's particularly relevant in light of an April study of SEC data from London Business School professor Maria M. Correia. That analysis showed that “politically connected firms are on average less likely to be involved in … enforcement action and face lower penalties if they are prosecuted.”

Whatever the reason for the proposed waiver, one thing is for sure: The move contradicts the claim that “no financial institution, no matter its size or global reach, is above the law.” Indeed, the Obama administration’s waiver proposal suggests exactly the opposite.