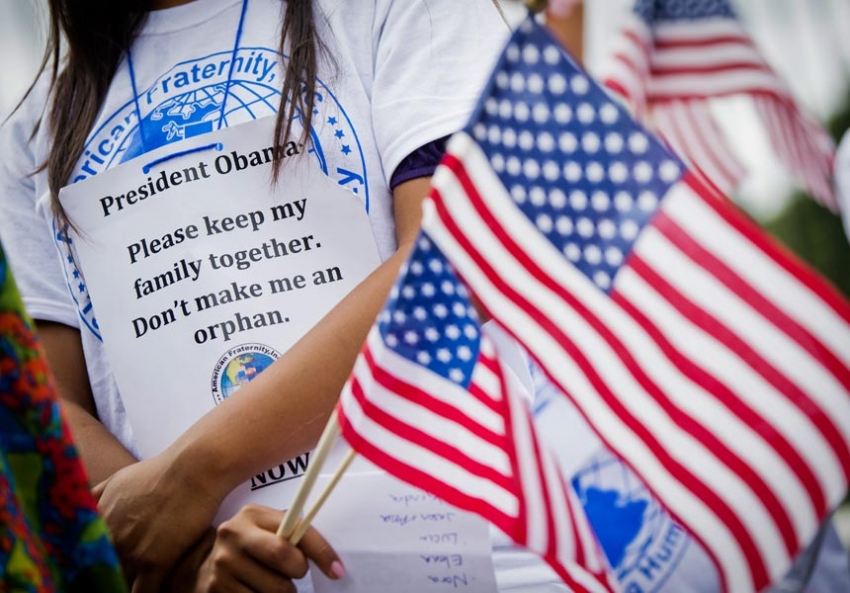 In front of the White House on September 8, a child whose father was deported protests Obama's delay. (Saul Loeb/AFP/Getty Images)

Immigration is important to Latinos, but so are issues such as education, healthcare, the economy, foreign policy and, yes, marriage equality and even fracking.

Here’s the secret about all that Latino anger over President Obama delaying promised immigration reform until after the midterms: It’s not going to make that much difference to Latino support for Democrats.

Have no doubt: It is infuriating that Obama has again sacrificed immigration reform. In the eleventh hour of his presidency, he still has barely moved a ball he put in play when he was a long-shot presidential candidate. There have been countless missed opportunities, especially that golden moment after his 2012 re-election when Mitt Romney’s “self-deportation” policy seemed to shame the GOP into rethinking their Latino playbook. But Obama has always had something more pressing to take care of—wars without end, the economic meltdown, the pivot to Asia.

His current priority is preserving the Democratic majority in the Senate, which is his only hope of getting anything done during the rest of his term (although the GOP House won’t pass squat, the Senate can at least confirm appointments). The thinking behind Obama’s timeout is that any kind of talk of immigration reform would energize anti-immigration groups, putting Democratic candidates on the defensive. It may be inhumane to leave millions of undocumented people at risk of deportation, but—considering that immigration foes tossed out former GOP honcho Eric Cantor because he seemed open to immigration reform—as naked partisan politics, it’s pretty smart.

Here’s the thing: Latinos just don’t matter much in these midterm elections. Look at the map. Of all the crucial Senate seats in play—which include Iowa, Kansas, Louisiana, Alaska, Georgia and Arkansas—only in Colorado do Latinos, who make up 14 percent of eligible voters, have a chance of making a difference in a close race. In every other one of those states, Latinos account for 6 percent or less of eligible voters. It would take an extreme scenario for Latinos to tip an election in these states: a race that came down to 1 or 2 percentage points and Latinos turning out en masse and voting as a unified bloc (which they rarely do). Even if Latinos were incensed and stayed home, nowhere but in Colorado is there a likely negative effect.

So for Democrats, there’s no real downside to Obama’s pre-election pause. By waiting until after November to make a big deal out of immigration, he avoids the Sunday morning TV scuffles now and gets to stand up and announce a new, ostensibly more humane policy later. That any action by executive order can be easily undone by the next president is not going to cause as much ire as Republicans’ constant opposition to any immigration relief.

The question is whether the blatant cynicism of these moves will sicken Latinos and keep them home during the midterms. Latino support for Obama, once as high as 82 percent, dropped to 52 percent in September after he announced the immigration delay—but it’s still above water and 10 points higher than the national average. A few Latinos may protest, but there’s no coordinated boycott movement—not even in Colorado, where every candidate has Latino voters in their sights.

Right now there’s plenty of venting on Twitter, but being pissed at the Democrats over this issue is not the same thing as abandoning them. Presente.org, a national Latino organization critical of Obama’s immigration policies, did ask Latinos to pledge not to vote for four Democratic senators who supported a failed measure that would have curtailed executive action on immigration. None of the four, however, are running in states where Latinos have much impact.

Immigration is important to Latinos, but so are issues such as education, healthcare, the economy, foreign policy and, yes, marriage equality and even fracking (a huge, urgent concern in Colorado, for example).

What makes immigration different is that it is more symbolically important to Latinos than any other issue. The way people feel about it is perceived to reflect attitudes about race and tolerance. Which means that while no mainstream party is doing a thing to truly reform immigration, as long as Republicans balk at everything immigration-related, the Democrats’ pledges of support and temporary measures will very likely be enough to get them over this latest contretemps with Latinos. Obama’s political math is correct enough—but that doesn’t excuse his bad moral calculus.