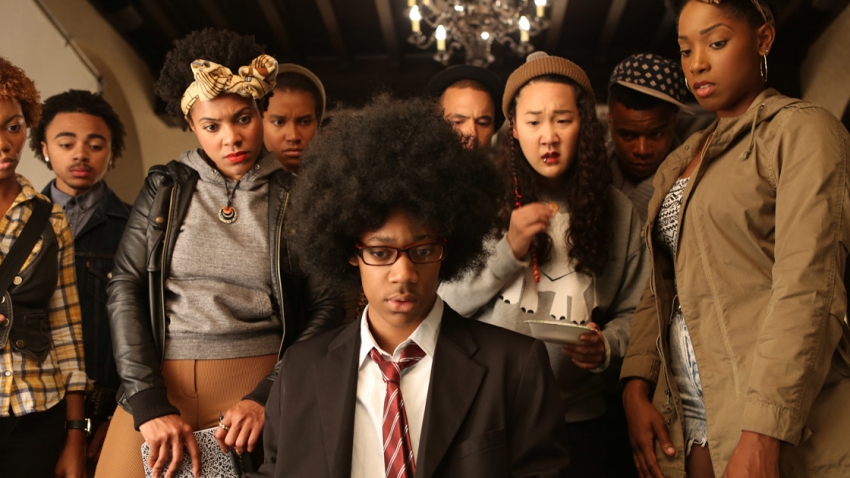 The film gives a view of the wide range of black identities, but can’t seem to tell a story beyond them about the nature of power in our “post-racial” society.

For all the nuance and layering Simien applies to his characters, they use a language that renders the world simply in black and white.

Dear White People is a well-produced directorial debut by Justin Simien, whose analysis of race and power is just as muddled and contradictory as the young and confused elite college students he portrays. But just because the film is internally incoherent doesn’t mean it’s not fun, funny or occasionally touching.

Set in the present day, the film follows the lives of five black people on the fictitious Ivy League college Winchester as they navigate race, love and ever-shifting personal identities. Broken into a series of blithely titled chapters, the film is billed as “a satire about being a black face in a white place.”

The film, however, is less a satire in the sense of using “wit to expose stupidity” as much as it is a mockumentary whose humor comes from its earnestness, in the vein of films like Best in Show. Perhaps this is because, as the title suggests, the work is narrowly pointed at white America. Or, more specifically, the type of liberal white America that prefaces racist statements with “I’m not racist, but…” and when challenged responds, “But my best friend is a black!” For those who already know that all black people aren’t the same (we have different names for a reason!), and that race, class and sexuality are complex parts of a greater whole, the film will have little critical edge. But for those who haven’t taken Race in America 101, the film may yet be productive.

Through a series of occasionally disjointed chapters, we are presented with a host of college archetypes: the charismatic jock played by the astonishingly beautiful Brandon Bell; the black militant played by Tessa Thompson, the pushover nerd played convincingly by Tyler Williams of Everybody Hates Chris fame, the society queen with a terrible secret (and an amazing wardrobe of pearl necklaces and backless dresses) played by Teyonah Parris, and the incorrigible dean played by Dennis Haysbert. Throughout, the film adds various layers to these one-dimensional caricatures by highlighting their “performance of blackness.”

For those who slept through critical race theory, it’s now taken for granted that there is no essential black experience. Rather, blackness is a social, political and economic construct that individuals engage with as society, the economy or our personal desires dictate. The film revels in multiplicity of identity, internal contradictions and the general sense of confusion and misidentification that characterize public discussions of race.

The viewer is constantly presented with an outward display of racial identity that is immediately undermined by an intimate moment. The jock, we learn, secretly watches sci-fi. The powerless nerd ultimately brings about the film’s climax by disrupting an “unleash your inner Negro” party and, predictably, the black militant is secretly in love with a doting if condescending older white man.

So what are we to make of the nuance and complexity Simien injects into his cast of familiar college archetypes? In more than one scene, he seems to tell us explicitly, “The role of film is to hold a mirror to society.” And on this count, Simien is most successful. The identity politics of the late 1960s and ‘70s that helped shatter the common sense understandings of biological race gave way to a more fluid conception of personal identity. And the recent victories in the campaigns for gay marriage, the growing popular acceptance of transgender people, and the expansion of gender identities on sites like Facebook suggest that ours is a society that is increasingly tolerant of difference. But focusing exclusively on issues of identity can fit neatly within a neoliberal framing which argues that “there is no such thing as society”—only individuals with their personal amalgamation of various identities.

This is reflected in sites like Angry Asian Man, Feministing and The Root, which seem to police the boundaries of rapidly evolving discourses on “privilege”, “triggers” and corporate tone-deafness. These platforms, like Dear White People, seem most interested in pointing fingers and analyzing individuals as the single (and most important) site for contestation and radical change. But demands to “check your privilege” or hire more black CEOs won’t provide meaningful solutions to the crisis of inequality.

Take, for example, a confrontation between Tessa Thompson—our budding Malcolm X—and the dean over her controversial college radio show. When told that her radio show is racist, she explains to him, as if in an Intro to Race class, that “Black people can't be racist because we don't have power.” The lines are delivered with the conviction of a crusader, and it’s clear that this is supposed to be a triumphant moment in the film. The white people addressed in the title are provided a definition of racism that is immediately contradicted by the scene itself: both the oppressive Dean and the radical troublemaker are black. Viewers are left pondering, “Can a black man oppress other people?”  One need only look at figures like Eric Holder, President Obama, CEO of McDonald's Don Thompson and the rest of the black power elite to recognize that the black bourgeoisie is entirely capable of oppression.

For all the nuance and layering Simien applies to his characters, they use a language that renders the world simply in black and white. A more satisfying analysis of race on college campuses would do more than reproduce well-known faux pas. A truly challenging film would interrogate the political economy that gave birth to the very category of race.

If the film’s role is to perfectly reproduce the messy realities of race on college campuses, then Simien has successfully “held a mirror to society.” But if you’re looking for a film that clarifies the nature of power and race in neoliberal society, Dear White People ain’t it.

Michael is the Executive Director of the Center for Progressive Strategy and Research where their research interests include race, employment and transnational labor solidarity. They currently sit on the board of The People’s Lobby Education Institute and have previously served on the boards of the Crossroads Fund and In These Times magazine. They are a proud member of Chicago's progressive queer community.