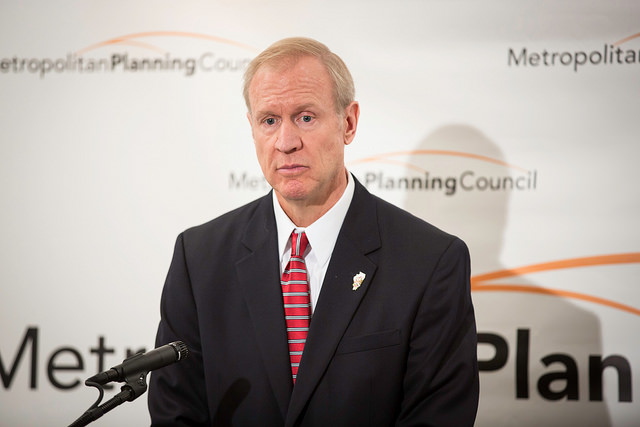 Bruce Rauner Will Run Illinois Like His Businesses. That Should Terrify Us. (Updated)

The Republican candidate for governor is a billionaire private equity mogul whose legacy in business leadership has been vicious and vindictive.

Even many voters who might like a tough-guy businessman as governor might balk at a candidate who engages in deception, evasion, threats, deliberate destruction of jobs, illegal treatment of customers and general business skullduggery.

Update: Bruce Rauner narrowly defeated Pat Quinn and will be the next governor of Illinois.

In a year when many gubernatorial and senate elections are looking like toss-ups as the final balloting day arrives, few seem closer than the fight for Illinois governor between incumbent Democrat Pat Quinn and Republican Bruce Rauner, a near-billionaire private equity fund executive who has never held office before.

It’s a race probably defined for most voters by which candidate they dislike more rather than by a passionate support for either contender.

Quinn is a veteran politician who casts himself as a populist. But after stepping in to replace Gov. Rod Blagojevich, convicted for misuse of his office for private gain, Quinn ended up alienating much of his potential populist base, especially public employees, whose pensions he cut (though the State Supreme court could overrule him, taking the state constitution’s protection of those benefits literally).

Rauner’s main base— other wealthy people—has helped him flood the state with ads, but even a new Carhartt coat and old van have not made a mean boss into an endearing buddy.

For those who are undecided, Quinn supporters go beyond the usual last-minute ads to offer a country-style “Ballad of the Plutocrat” and a two-minute summary of why not to vote for Rauner. The gist of the latter’s quick-paced narrative is that Rauner, despite his charade with an $18 watch, is a member, by his own admission, of the 0.01%, who pays $100,000 a year at one of his nine mansions just for parking and belongs to a $140,000 a year wine club. Yet Rauner has said he opposes raising the minimum wage, takes advantage of tax dodges in Cayman Islands and built a business that specialized in advising how to offshore jobs.

And that leads to the key problem with Rauner: in a sense, he is what he says he is. He is running as a businessman who will run the state like a business.

How would that look? Two of his role models are former Indiana Gov. Mitch Daniels and current Wisconsin Gov. Scott Walker, both of whom started out by trying—with considerable success—to destroy public employee unions.  Rauner has made it clear he wants to take on the public employee unions in Illinois. Many Republican executives would applaud that, but it is not what many independents or middle-of-the-road working people think of as a businessman-governor running an efficient, effective government.

But even many voters who might like a tough-guy businessman as governor might balk at a candidate who engages in deception, evasion, threats, deliberate destruction of jobs, illegal treatment of customers and general business skullduggery.

For example, even most voters sympathetic to the idea of a businessman as governor probably do not have in mind one who tolerated a manager accused of hitting a secretary  and creating an atmosphere of violence in the workplace simply because clients liked the manager, as Raumer is accused of doing at his outsourcing firm LeapSource.

“I will bury her. … I will make her radioactive. … She will never get another job anywhere, ever. I will bankrupt her with legal fees. I don’t know if she has a family or not, but if she does, she better think twice about this,” Rauner allegedly told a LeapSource board member.

GCTR had also assembled a chain of nursing homes, Trans Healthcare, Inc., for which Rauner had been making decisions four years after it was founded, the Chicago Tribune discovered—not the one year that Rauner claimed he had been involved. During those years, the nursing homes were sued and charged over $1 billion for at least six wrongful deaths. At the same time, investors, including GTCR, created a financial shell for all of the chain liabilities that was turned over to one of the residents of the nursing homes, thus protecting the assets of the investors.

Then there was yet another disquieting twist in the final weeks of the campaign. The Chicago Sun-Times, recently purchased by a group of investors including Rauner and still owned by many of his friends, pulled Dave McKinney, the paper’s long-time statehouse political reporter, off his reporting on the nursing home story and all politics on the grounds of questionable appearances because his wife works as a political consultant.

Independent political reporter Rich Miller denounced Rauner’s intervention, the Sun-Times’ quashing of its own reporter’s solid work, and the Sun-Times’unrevealed conflicts of interest in suddenly abandoning its relatively new policy of not making endorsements for a special exception—an editorial endorsing Rauner.

The cases run on and on:

Does the state need to be run like these businesses? By this kind of businessman?

Joe Biden Is Railing Against Hedge Fund Managers, But He Has a Long History of Courting Them