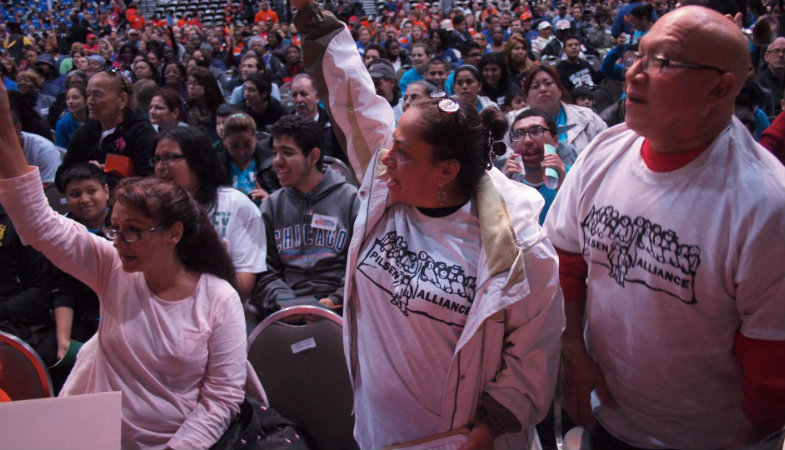 Two Chicago coalitions are working to elect progressive candidates in the 2015 elections—and build an enduring movement.

"It will take grassroots leaders having clarity and unity on how to elect the progressive candidates we really need, and staying with them for the long haul."

Regardless of the mayoral outcome, two major Chicago coalitions are working to change the city’s political course by targeting the 50-member City Council, trying to elect more progressive candidates willing to challenge the mayor while also building a durable political grassroots movement.

On November 15, Reclaim Chicago will announce its endorsements in 10 to 15 aldermanic races. Group leaders have been interviewing candidates and deciding endorsements based on a platform that includes promoting a living wage, high-quality public schools, criminal justice reform and infrastructure spending; and opposing privatization, cuts to pensions and layoffs of public workers.

In the three months leading up to the election, Reclaim Chicago will campaign for the candidates it endorses with door-to-door canvassing, political organizer trainings and community meetings.

“Our strength is mobilizing a well-trained group of citizens who will do face-to-face canvassing to talk to residents one-on-one about our vision—about what Chicago should look like and about these particular candidates,” said Reclaim Chicago spokesperson Kristi Sanford. “We can’t finish the work in one electoral cycle—we’re trying to over time build an independent political organization that holds officials accountable.”

Both groups are 501(c)4 non-profit organizations that can lobby and endorse candidates. Reclaim Chicago is a project of the People’s Lobby, a national grassroots organization, and the National Nurses United labor union. The People’s Lobby played a major role in the successful campaigns to elect Christian Mitchell and Will Guzzardi to the state legislature by winning the March 2014 Democratic primaries. (In Chicago, Democrats are virtually guaranteed to win in the general election.)

Guzzardi, who won the 39th district on the northwest side of Chicago over political machine-backed incumbent Toni Berrios called the People’s Lobby “incredible partners” in his campaign.

“They were amazing. Their organizers were diligent and focused and disciplined,” Guzzardi says. “They fit in perfectly with the model we were building, which was one focused very strongly on door-to-door and grassroots work and bringing a progressive message, particularly about the economy.”

So far, Reclaim Chicago has announced one endorsement, Carlos Ramirez-Rosa in Chicago’s 35th ward—the same area from which Guzzardi was elected state representative. Rosa’s campaign pledges include to fight for a $15 minimum wage and lower public transit fares; to support public education; and to give back $35,000 of his own salary to be put toward infrastructure investments.

Maria Fitzsimmons works as a full-time organizer for a faith-based organization and also plans to put in long hours volunteering with Reclaim Chicago. She has years of experience in community organizing in New York City, Seattle and Los Angeles, where grassroots organizations gained significant victories recently including Seattle’s $15 minimum wage and legislation ensuring the rights of domestic, restaurant and other workers.

“It will take grassroots leaders having clarity and unity on how to elect the progressive candidates we really need, and staying with them for the long haul,” she said. “It’s not only get out the vote, it’s get to know the candidate, get to know the issues, put this person in office, stay with them, build your own power with them, don’t leave them hanging. City Council is a rough place—we need to make sure they have the constituent support they need to enact the policies we asked for when we elected them.”

The idea is also to frame city issues in a larger context, challenging the power of corporations and pushing for increased democracy.

“It’s not just talking about, ‘We have to fund city services,’” Fitzsimmons says. “It’s a question of why aren’t city services well-funded, who isn’t paying their fair share, how are we not structuring our government and economy to reflect that we’re all in this together?”

Guzzardi said the Republican victories in the November 4 elections nationwide, including for Illinois governor, show how important this message is. He thinks people who feel they are suffering and left out of the supposed economic recovery responded to Republicans’ mantra that their woes are government-inflicted. Reclaim Chicago puts forth a different view.

“The wealth is being concentrated in the hands of fewer and fewer wealthy people and a few international corporations. The rest of us are being left out to dry,” Guzzardi said. “That’s a story that resonates with a lot of people. That story is an incredibly powerful organizing tool.”

A similar approach is taken by the Take Back Chicago campaign.

“You can see this in the fast food strikes, the organizing around the $15 minimum wage,” said Grassroots Illinois Action executive director Amisha Patel. “People can’t make ends meet, they are tired of not having the resources in their neighborhood, seeing their schools close, their public mental health clinics close, seeing jobs dry up in the neighborhoods.”

Many Chicagoans still reminisce about the multi-racial grassroots movement that came together to elect Harold Washington as the city’s first Black mayor in 1983. It is clear that the political and demographic structure in Chicago today is significantly different, and that same movement can’t necessarily be revived. But Patel is among those who think another popular and powerful movement is building that could result in a more independent and responsive City Council—and a brighter and more humane future for Chicago.

“People are ready to look forward instead of looking back,” Patel says.