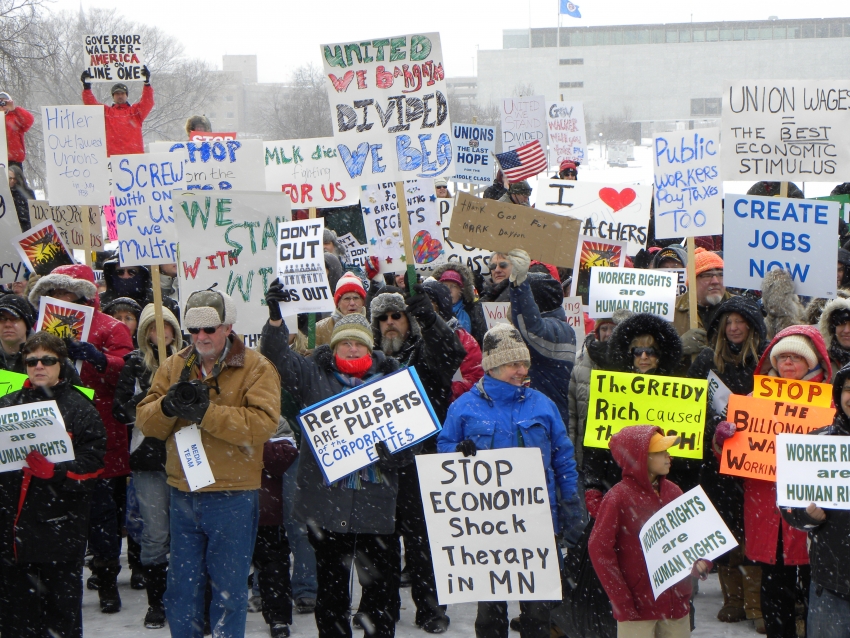 A protest in support of the Wisconsin unions fight against 'right-to-work' laws. (via Fibonacci Blue/Flickr)

With union membership declining, Tom Geoghegan has a radical prescription for labor.

‘In the century to come, new labor has to step back, give up its control over the old labor law remedies and let workers do things for themselves.’

It is not difficult to imagine the United States without a labor movement. Less than 7 percent of the country’s private-sector workforce is unionized. Twenty-four states have enacted “right to work” laws that sap union treasuries by allowing workers to benefit from union contracts without paying dues. Even Michigan became right-to-work in 2012.

The title of Geoghegan’s new book, Only One Thing Can Save Us: Why Our Country Needs a New Kind of Labor Movement (The New Press), signals a manifesto. Geoghegan methodically builds his case around two arguments. First, for labor to make a comeback, American workers must be less beholden to hidebound unions and the federal National Labor Relations Board (NLRB), the agency that referees union elections and mediates labor disputes. Workers must have the opportunity to more directly control their lives through workplace democracy.

Geoghegan’s second argument is that a new kind of movement can only be born through new laws—which means the Democratic Party must return to its labor roots. Geoghegan pleads with Democrats to do more than tinker with the mini- mum wage and tout college diplomas. Given that most jobs being created in the United States do not require a four-year degree, he argues, Democrats must foster a new and stronger labor movement to combat rampant inequality.

Only One Thing Can Save Us is vintage Geoghegan: erudite, witty, autobiographical and compulsively tangential. (He’s not shy about his love for John Dewey and John Maynard Keynes.) There’s also some guilt. While running for Chicago Mayor Rahm Emanuel’s old Illinois congressional seat in a 2009 special election, Geoghegan barely mentioned organized labor. He got clobbered (his word) in the primary and now gives us this “act of expiation.”

Geoghegan churns out a book every three or four years, all while representing embattled workers and unions (including the Chicago Teachers Union). He was bound to return to the fate of the U.S. labor movement, having started there in 1991 with his first book, Which Side Are You On?: Trying to Be for Labor When It’s Flat on Its Back.

Now labor’s back seems to be broken, and Geoghegan is tired of losing. The ambivalence about unions (not to be confused with workers’ rights) that animated Which Side Are You On? has become 11th-hour desperation. Outmatched by union-busting employers in court and hobbled by the bottleneck of the NLRB, organized labor’s last best hope is to conduct “political strikes” that force deep change, he argues.

“To go up against employers with the idea of bringing labor back is futile,” Geoghegan writes. “Yet if the real target is the Democratic Party and not the employers, enough disruption, made up of little hit-and-run strikes, might change the world.”

He advocates one-day strikes, concluded before employers can legally replace workers, as a way to disrupt business-as-usual for employers and to shame Democrats into pushing a pro-labor agenda. An example of the approach is the SEIU-backed Fight for 15 campaign’s fast-food worker strikes, which seem to have pushed a minimum wage increase onto the Democratic agenda this year.

But Geoghegan is after more than wage boosts. “The goal is to build up to a 1968-style political fight to force the Democratic Party to sign on to a revamping of corporate law,” he writes. The revamp would substitute a “stake-holder” corporate model for our current one. In other words, follow the lead of Germany, where labor power is baked into company operations through “co-determined” boards of directors featuring elected employees and “works councils” unaffiliated with any union that help manage local working conditions. He explored such themes in his last book, Were You Born on the Wrong Continent? How the European Model Can Help You Get a Life, which declared his love for Germany’s labor relations and well-guarded industrial base.

Yet Geoghegan’s push for the stake-holder model has an air of unreality, and not just because it’s nigh impossible to imagine Democrats altering the DNA of American-style corporate capitalism. Importing the German labor-management model would also change unions. Under current labor law, only an elected union representing all workers can negotiate working conditions.

Geoghegan thinks this model alienates Americans who are looking for control rather than solidarity—like “a guy in Alabama who deep down is waiting for a labor movement that won’t be imposed on him.” So unions must surrender some control, he writes, in a passage sure to anger some union officials:

The period of childhood or tutelage—the nature of it depends on which union is the “parent”—has to end. In the century to come, new labor has to step back, give up its control over the old labor law remedies, and let workers do things for themselves.

Sounds great. But why would unions flex what little muscle they have left to push for changes that undermine their own power—especially given what appears to be long-term GOP control of the House and the Senate filibuster. (The filibuster, Geoghegan notes acidly, “has always existed in part to ensure a pool of either slave or low-wage labor.”) Mindful of Washington’s perpetual gridlock, he suggests that state governments might first experiment with amending the corporate model to boost workers’ power. For example, they could give tax breaks to any company that allows employees to elect half of its board of directors.

A more straightforward way to bolster the labor movement would be to amend the Civil Rights Act to include the right to join a union. This would allow individuals to bypass cumbersome NLRB procedures and sue anti-union employers in federal court. Geoghegan is so confident that a civil right to unionize would grow the movement that he proposes—if the filibuster isn’t abolished!—stomaching a national right-to-work law in exchange for the amendment.

It is a troubling paradox that his vision for a new kind of movement—less hierarchical and dependent on NLRB-certified elections and contracts—is so predicated on government action. A New Deal Democrat, Geoghegan sees the modern labor movement as a glorified federal policy project gone off the rails. It began with Washington elites arming workers with legal tools, which have since rusted into uselessness.

Apparently, then, the one thing that can really save us is a new kind of Democratic Party. But as implausible as Geoghegan’s vision for labor—and the Democratic Party—may be, its premise is right: Unions can only survive by fighting—and evolving.