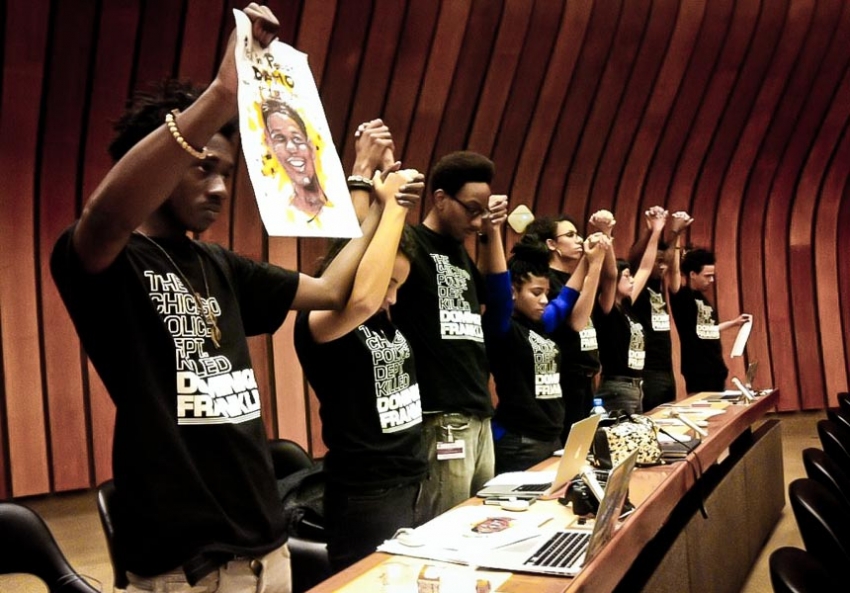 During the U.S. response to their report to the UN, Chicago youth staged a protest, standing with their fists in the air for over a half hour. (Photo courtesy of We Charge Genocide)

A new generation globalizes the struggle.

On November 11, We Charge Genocide member Asha Rosa, 20, told the UN, 'In Chicago, the police are a source of violence and are completely unaccountable.'

Stan Willis has no doubt that international pressure helped jail former Chicago police commander Jon Burge, head of the city’s infamous corps of torturer cops. Willis is an attorney who defended many of Burge’s more than 100 victims and was later instrumental in the push for Burge to be prosecuted. “After we were repeatedly rebuffed in the courts here, I convinced my activist colleagues to take the Burge torture case to the international stage,” he says.

In 2008, Willis and others testified about Burge before the United Nations International Committee to Eliminate Racial Discrimination. Burge was arrested later that year, and eventually convicted—unfortunately, only on charges of lying about the torture ring, and he’s now free after serving less than four years in prison. But Willis maintains that without global pressure, Burge never would have seen the inside of a jail cell.

This strategy is being adopted again in the wake of the police killing of 18-year-old Michael Brown in Ferguson, Missouri. In November, Brown’s parents traveled to Geneva, Switzerland, to testify before the UN Committee Against Torture. Although their testimony was private, they were said to have read from a statement that recommended the arrest of Darren Wilson and an end to “racial profiling and racially based police harassment across the jurisdictions surrounding Ferguson.”

They were joined by We Charge Genocide (WCG), a group of black youth who are putting the issue of police violence in Chicago on the international stage. The name derives from a 1951 petition signed by W.E.B. Dubois and Paul Robeson, among others, and delivered to the United Nations by the Civil Rights Congress. The petition alleged that the U.S. government treated its black citizens in a manner consistent with the UN’s definition of genocide; that is, committing acts with “intent to destroy” black Americans “in whole or in part.”

In the same spirit, WCG submitted a report to the UN Committee Against Torture alleging that the Chicago Police Department regularly engages in torture. They were invited to give testimony along with Brown’s parents. On November 11, WCG member Asha Rosa, 20, told the UN committee, “In Chicago, the police are a source of violence and are completely unaccountable.” The delegation made an international ripple when it walked out of the hearing as the U.S. representatives offered their defense. “We were insulted by their suggestion that 330 police in the past five years being prosecuted could even begin to rectify the violence Black and Brown communities experience at the hands of the police and the state,” the group said in a later statement.

Willis is heartened by these renewed attempts at global outreach. During their testimony, WCG members wore shirts commemorating the police killing of Dominique Franklin, a black youth in Chicago whose family Willis represents. Nor has he given up the fight to bring international pressure to bear on the Burge case. He helped write “Torture in the Homeland,” a report presented to the UN committee in Geneva that chronicles in detail the sins of Burge-era police torture and calls for international accountability.

Willis was inspired to think in terms of global solidarity by the Pan-Africanism of the mid-’60s and ’70s that followed in the footsteps of globally minded black icons like Dubois, Robeson and Marcus Garvey. “An international perspective changed my view of the world,” Willis recounts. “I believe this kind of global synergy energizes the movement everywhere.”

Willis is adamant that international pressure can have a real impact. For example, many think that Cold War competition helped spur the Civil Rights Act, as the United States responded to Soviet charges that racial discrimination was akin to Nazism.

So what about Ferguson and the issue of police violence? The nationwide protests over the police killings of Michael Brown and  Eric Garner—and the failure of grand juries to indict—have put the United States under an uncomfortable spotlight. “The UN can’t really do anything to the U.S.,” says Willis. “But I’ve learned global public opinion is very powerful.”

Apparently, and thankfully, that lesson has penetrated another generation.