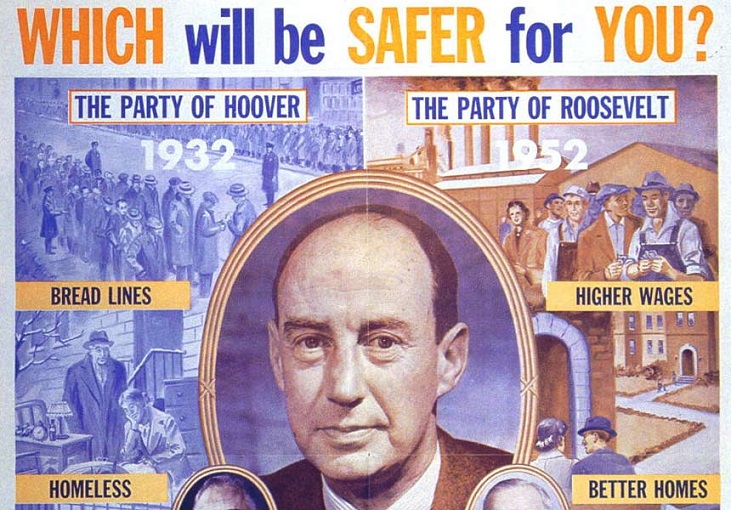 An Adlai Stevenson campaign poster from the 1952 election.

Post-WWII America was more complicated than we remember.

I learned something about America in 1956: It was a much more complicated place than I’d been brought up to believe.

In January 1956, after four months typing in a London basement to earn the £68 I needed for the fare, I sailed from Liverpool to New York on the Britannic, a Cunard Line ship. The journey took seven days, and I was met at the waterfront by my boyfriend Karl, who’d been at Harvard during those months on a Commonwealth Fellowship. He had learned to drive since I’d last seen him and been given an ancient Buick, in which we were to proceed nervously along the Merritt Parkway to the apartment he’d rented in Cambridge. He’d found furniture at the Salvation Army, and the bed buckled, I remember, on our first night, while the central heating gushed up through vast gratings in the floor. But it was a charming apartment in a timbered house on Hawthorn Street. Our landlord, who lived below, arrived the next morning to explain that he didn’t want sinners in his house. So we got married at the end of that week or the next, in the front room of the local Justice of the Peace, and I have a rather dubious-looking certificate to prove it.

The ’50s are often written about as grim and dull, full of repression and particularly discouraging for women. I don’t remember them quite like that. Rather, they were a time of recovery and change. Eisenhower was president then, and in our no doubt callow way we were pretty sure that even a general as famous as he was could not be taken seriously as president. We were in love with Adlai Stevenson, who was standing as the Democrat candidate for the second time. We made up songs about him and liked him for being clever, among other things. By then, though, we were becoming used to conservative governments. Between 1951 and 1964 Britain had a series of them. But we were beneficiaries of the five years following World War II, when Clement Attlee and his Labour government had presided over some extraordinary transformations to health and welfare and education and had nationalised the railways, the coal mines, the steel industry, and electricity and water.

Karl’s generous scholarship had not allowed for wives at Harvard, so I needed to get a job, and I found one—as a research assistant—with the formidable Carl J. Friedrich, who, with his students, was producing a monograph on East Germany. There was often talk—and occasionally visits—of a youngish instructor called Henry Kissinger, who, it was hoped, might devote some time to our DDR project. But he seemed always to be in Washington: gallivanting, it was suggested by the woman who ran the department. I learned quickly from her that I should not mention demonstrations or protest songs. Friedrich was famous for his role in drafting constitutions, like the Federal Republic of Germany’s, but also for his disapproval of grassroots movements, which he thought of as undemocratic, perhaps because they had not been elected.

That year, 1956, was memorable. Eisenhower was re-elected and our much-admired Stevenson defeated, again. We came home to the Suez crisis and demonstrations in Trafalgar Square. A police horse gently kicked me to the ground as I shouted, “Eden must go!” But I was unhurt and so was the baby I’d just learned I was carrying. Later that year, the Soviet Union invaded Hungary, and for most of the few remaining Communists I knew that was the last straw, and they left the Party.

The 10 post-war years were curious years: full of hope and spirit, but still mired in gloom, austerity, sexism and homophobia (though we were struck by how much more devastating that was in the United States, and even at Harvard, than it was here). We had not gone through anything as appalling as McCarthy’s purges, and race-inspired conflicts had yet to erupt, as they did in London in August and September 1958.  The Cold War was getting into its stride, however, and a lot of former advocates of communism (especially in America, such as Irving Kristol) had become passionate defenders of the status quo.

I learned something about America in 1956: It was a much more complicated place than I’d been brought up to believe. It was neither Hollywood nor bonneted puritanism, but perhaps more “old world” than “new world” in many respects.