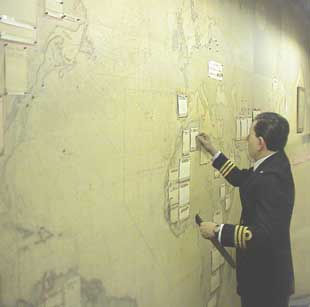 Thoughts about maps and spatial logic in the global present

Terms such as “ mapping,” “borders,” “hacking,” “trans-nationalism,” “identity as spatial,” and so on have been popularized in recent years by new media theories’ celebration of “the networks”—a catch-all phrase for the modes of communication and exchange facilitated by the Internet.

We should proceed with caution in using this terminology because it accords strategic primacy to space and simultaneously downplays time—i.e., history. It also evades categories of embodied difference such as race, gender and class, and in doing so prevents us from understanding how the historical development of those differences has shaped our contemporary worldview.

The rhetoric of mapping and networks conflates the way technological systems operate with modern human communication. According to this mode of thought we are to believe that we live inside the world of William Gibson’s Neuromancer and that salvation is only attainable via very specific technological expertise unleashed against the system—i.e., hacking. Consider the heroes of Hollywood sci-fi blockbusters such as The Matrix whose power lies in their knowledge of “the code.” It is implied that we operate in networks because computers and the Internet have restructured “our” lives and because global economic systems have turned us into global citizens. Hacking then comes to stand for all forms of critical engagement with preexistent power structures.

I’m just a little too old to believe these new media mantras unquestioningly. This rhetoric implies two possible explanations for the difference between the networked present and the non-networked past.

The first explanation suggests that no one on the left before the age of the Internet practiced subversive manipulation of existent media, tactical intervention, investigative reporting and infiltration of power structures. It also would seem that before the dawning of the networks, no one knew what being an organic intellectual was about, no one elaborated alternative communication systems and no one was aware of or sensed a connection to geographic regions other than Europe.

The second explanation would be that electronic communication has produced a form of networking that is so radically different as to imply a neat break with the past. In either case, these arguments conveniently situate their advocates outside history, since either way tactical media practitioners have nothing of value to inherit from the past.

While I can understand that there might be a dearth of knowledge about tactical interventions of previous centuries, I am perplexed by the apparent loss of short-term memory of many cultural theorists now in vogue, who were alive and active in the ’70s.

Can we forget Daniel Ellsberg’s publishing of the Pentagon Papers, the uncovering of the Watergate scandal, the break-in to an FBI office by an anonymous group that led to revelations of COINTELPRO and the Freedom of Information Act, the many Senate investigations of FBI corruption, the widespread solidarity with Third World independence movements, the plethora of underground and alternative presses and global mail art networks—all operated by radical activists, artists and intellectuals? Those of us who can at least recall the ways that these strategic interventions transformed political and cultural life in that decade necessarily cast a skeptical glance at the messianic claims of technocentrists.

The shift from Eurocentric internationalism to a more globally inclusive worldview came long before the age of the Internet. It was launched outside Europe and America, and emanated from the geopolitical margins. The process took place across a range of fields of knowledge, culture and politics. This revision of the world picture was catalyzed by postwar decolonization; the Non-Aligned Movement launched in 1961; and civil rights struggles in the developed world, including the Black Power and Chicano movements—all of which invariably affirmed their alliances with Third World revolutions. This political process was expanded upon by a postcolonial understanding that various diasporas shared transnational connections and that these diasporas were produced by the economics and politics of colonialism and imperialism. The historical bases of these movements are consistently obfuscated by the technocentric rhetoric of networks and mapping that emanate from Europe, North America and Australia.

Instead of dealing with these histories, contemporary discourses on globalism and new technology tend to dismiss postcolonial discourse as “mere identity politics.” They tend to confuse bureaucratic efforts to institutionally separate the concerns of ethnic minorities with what always have been the much broader agendas of anti-racist political struggles and postcolonial cultural endeavors.

I am a great admirer of the practice of electronic civil disobedience and have used “hacktivist” software such as Floodnet to engage in online protest actions myself. But I find the willed historical amnesia of new media theory to be quite suspect, and even dangerous. One of the reasons I chose to make a/k/a Mrs. George Gilbert, a video art piece about the Angela Davis case, was because I wanted to reexamine crucial histories that are now being forgotten within the contemporary conversations on globalization. The alienation caused by multinational corporate domination (otherwise known as Empire) that many middle-class young adults in the Global North feel is just the last chapter in a long history of reactions against imperial projects.

Another issue of concern is the new media culture’s fascination with mapping—a fascination that it shares with the military strategists. The news of the Iraq war frequently involves men in uniform pointing to or better yet walking across maps of various Middle Eastern countries—so when I then walk into galleries and cultural conferences in Europe and find more men (without uniforms) playing with maps, I start to wonder about the politics of those representations.

In the American media, maps dominate representations of warfare. While realistic depictions of the violence of war via photographs and film have been banned from American television news, maps are acceptable to those in power because they dehumanize the targets. Similarly, in the context of the art world, maps have come to abstract and thereby silence individual and group testimony.

New media culture uses maps to read the world in terms of extremes. Contemporary cultural theory is rife with renderings that celebrate macro views and micro views of the workings of the world, both social and biological—which is to say, maps of vast spaces and physical phenomena and maps of the most minuscule thing. We hear over and over again about global systems and panoptic vision on the one hand and genome chains and nano-entities on the other. When I first noticed this phenomenon I was struck by how it complements the resurgence of formalist art criticism’s love affair with the grid. By this I am referring to the return in the ’90s to the definition of art as a search for “perfect forms,” and a celebration of the formal characteristics of objects and surfaces. What I have become more concerned about as time goes on, however, is how this fetishizing of spatial extremes enables the resurgence of Descartes’ idea that humans are rational, autonomous individuals and that the human mind and mathematical principles are the source for all real knowledge.

However objective they may appear, maps do have a point of view, and that is one of privileged super-human sight, of safe distance and of omniscience. The mapmaker charts an entire field of vision, an entire world, and in doing so he (yes he) plays God. Whether you are beholding the map as a viewer or charting it as the cartographer, you rule the world before you, you control it, and, in putting everything in its place, you substitute a global whole established through pictorial arrangement for an actual dynamic engagement with individual elements and entities. The psychological motive behind assuming that position of power is not questioned, nor is the predominance of white male techno-elites in that discourse seen as anything more than incidental.

It is as if more than four decades of postmodern critique of the Cartesian subject had suddenly evaporated. Those critical discourses that unmasked the way universals suppress difference, which gave voice to the personal experience of women, the poor and disenfranchised minorities, are treated as inherently flawed by both the progressive and conservative discourses of globalism. Progressive media advocates dismiss these discourses of difference as “essentialist” while Republicans decry them as “the tyranny of special interests.” But both provide ideological justification for the dismantling of legislation protecting civil rights.

Viewing the world as a map eliminates time, focuses disproportionately on space and dehumanizes life. In the name of a politics of global connectedness, artists and activists too often substitute an abstract “connectedness” for any real engagement with people in other places or even in their own locale.

What gets lost in this focus on mapping is the view of the world from the ground: lived experience. What is ignored is the pervasiveness of the well-orchestrated and highly selective visual culture that the majority of Americans consume during most of their waking hours. Most people are not looking through microscopes and telescopes and digital mapping systems to find truth about the world. They are watching reality TV, sitcoms, the Super Bowl, MTV and Fox News, all of which also offer maps of a completely different kind: conspiracy theories that pit innocent Americans against the Axis of Evil, embedded journalists’ hallucinatory misreadings of foreign conflicts, allegories of empowerment through consumption and endlessly recycled, biblically inspired narratives of sin and redemption.

Finally we should consider what is being left off the maps and why? What has happened, for example, to institutional self-critique in the art world? Why has such examination become taboo in exhibitions or unpopular with artists who gravitate to political subjects? Why in the midst of myriad investigations of corporate control of politics and culture is there little or no attention paid to corporate control of the museums and of corporate influence in art collecting? Why is it acceptable to the art world for an artist to address the Israeli-Palestinian conflict, but not to address the pressure put on the organizers of global art exhibitions to showcase a disproportionate number of Israeli artists? Why is it fine for black artists to celebrate the construction of black style but not to make visible the virtual absence of black people as arbiters in the power structures of the art institutions, galleries, magazines and auction houses where black art is given economic and aesthetic value?

We live in a very dangerous time in which the right to express dissent and to raise questions about the workings of power is seriously imperiled by fundamentalisms of many kinds. Now more than ever we need to keep the lessons of history foremost in our minds and to defend the critical discourses and practices that enable differing experiences and perspectives to be heard and understood.

There are just too many important parallels to be drawn between COINTELPRO and the excesses of law enforcement brought about by the Patriot Act to be dismissive of history. Socially conscious artists and activists, rather than embracing tactics that rely on dreams of omniscience, would do well to examine the history of globalism, networks, dissent and collective actions in order to understand that they are rooted in the geopolitical and cultural margins.

Coco Fusco is an interdisciplinary artist and an associate professor at Columbia University’s School of the Arts. Her most recent publication is Only Skin Deep: Changing Visions of the American Self (Abrams, 2003).