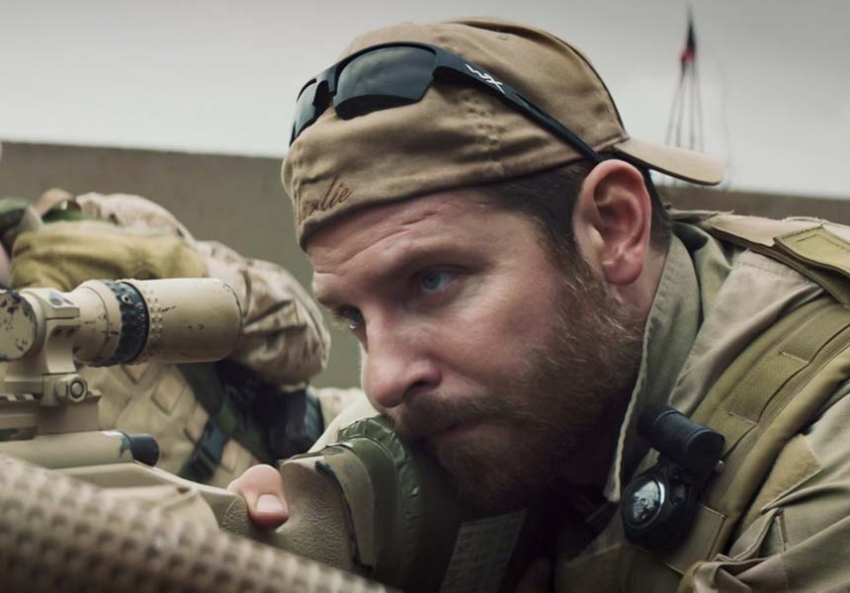 Sure, Kyle is haunted by having to pop women and children from hundreds of safe yards away, but he’s Us, after all—a little guilt with the badassery is our holy burden. The Iraqis, on the other hand, are black-clad, sneering, Nazi-ish monsters.

Clint Eastwood’s American Sniper perfectly epitomizes a certain kind of American horseshit: the militaristic anthem thinly disguised as a sob story, the spray of nationalism scented with humanist rosewater. In telling the potentially resonant life story of Chris Kyle—a Navy SEAL who survived four tours in Iraq, where he reputedly became “the deadliest sniper in American history,” with 160 confirmed kills—Eastwood picks gently at the scabs of war, never questioning the wound or the society that inflicted it.

It’s all guns, God and gallons of testo’, delivered in the check-box fashion of the modern biopic. We follow Kyle from deer-shootin’, schoolyard-brawlin’ Texas tyke to aimless-n’-wild twentysomething (enter Bradley Cooper) to buffed-up SEAL recruit, and then it’s off to the circus. Kyle’s unit gets the deployment call, wouldn’t you know it, right in the middle of his wedding reception.

Eastwood treats Iraq like Iwo Jima, an unambiguous battle against Evildoers, with Kyle an honest-to-God American hero picking off headshots from rooftops. Nowhere in sight is the simple awareness that we were the invaders. This is another one of those movies, like Zero Dark Thirty, that makes me worry for the country, if only because it implicitly extols the virtues of xenophobic slaughter in lieu of even a glancing awareness of political facts.

Sure, Kyle is haunted by having to pop women and children from hundreds of safe yards away, but he’s Us, after all—a little guilt with the badassery is our holy burden. The Iraqis, on the other hand, are black-clad, sneering, Nazi-ish monsters, opening kids’ skulls with hand drills and hiding in shadowy villain dens. Like a superhero, Kyle even has an evil counterpart, a handsome arch-nemesis sniper who dares to shoot American soldiers. Cue the Act Three triumph via a slo-mo bullet and an inspirational exhortation after a comrade dies, “Do it for Biggles!”

That’s two-thirds of the film. The other third, woven in and out, is concerned with Kyle’s PTSD and his inability to live happily at home with his patient wife (Sienna Miller) and kids, a dynamic that’s prevalent but painfully hard to dramatize. Even so, Eastwood’s punctuative scenes and emotional short cuts are crude and unconvincing, and hardly a tonic for the militaristic assumptions that saturate the film. Sometimes, Eastwood has proven a graceful and nuanced director: Bird (1988), Unforgiven (1992) and Mystic River (2003) remain troubling and original. But more often, as here, Eastwood’s approach is as ham-handed as his amazing dialogue with an empty chair at the 2012 Republican Convention.

Kyle’s tale is a tragedy, in terms of his soulless patriotic skill at killing Arabs, his manipulated and common dimness about why the war happened at all, and the emotional damage he incurred, making him unfit for real life. But Eastwood doesn’t see it that way. Rather, this movie is a hero’s funeral parade (long discharged, Kyle was killed in 2013 by another vet at a gun range in Texas), with the post-traumatic ordeals registering as a sort of grim social irony, as if somehow ordinary domestic life has failed returning vets by its very nature.

For his part, Cooper, an energetic and quick actor, suffices as Kyle, though his limpid-eyed beauty has difficulty communicating the character’s scary repression and macho cement-headedness. Nearly everyone else, typically for an Eastwood film, is close to amateurish.

Isn’t there something essentially awful about celebrating America’s “deadliest sniper”? In such a lopsided and criminally motivated war? Hindsight will, I think, bruise American Sniper badly; consider how a patriotic film about a voluminously homicidal American soldier in Vietnam would play today. In any case, not being an expert, I’m tempted to wonder if Kyle’s body count—which is why the movie, and Kyle’s bestselling memoir, exist—suggests mostly that Iraqis were better at getting shot in their cities’ straight streets than, say, the Southeast Asians were in their jungles. New technology helped, too, as you can glean from the fetishistic weapons inventory on Kyle’s Wikipedia page.

But who’s keeping score, really? Maybe more Americans than I hope. Eastwood knows his America, and this movie is going out to it, with a bullet.